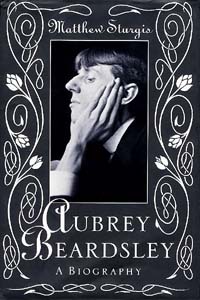 When Aubrey Beardsley was six years old, the miniature dandy stood with his mother in Westminster Abbey and declared himself to be "rather good looking." It was his physical appearance above everything else, he decided, that should be immortalized in art after his passing. Unfortunately, we're all rather good-looking at such a young age, and Beardsley later grew to be startlingly thin and sallow (as did his nose). Still, his frank declaration of self-enchantment reveals the sort of infatuation and eroticism that would become the very connotation of his famous name and artwork. For all its necessary ruffles and roses, Matthew Sturgis' Aubrey Beardsley: A Biography is an excellent and unintoxicated study of this notorious life that paints all the decadence of fin-de-siècle London without overlooking the serious intellectual development that lead to the rise of the dandy archetype in stature and style.

Shockingly, Beardsley was not reared by fleshy, wine-sipping gods in a forest of symbols. Instead, he was born into a working-class Brighton family burdened by debt and a tragically weak father. Sturgis earnestly documents the first stages of Beardsley's life delicately and with little hint of the irony that a figure as pompous as Beardsley might actually deserve. The sad details of the Beardsley family misfortunes, from their constant relocations to Aubrey's first childhood brushes with tuberculosis, are balanced with images of evenings by the piano and wildly precocious literary and artistic feats on Aubrey's part. Sturgis also deftly sums up the social mindframe of the witty late-18th century with a gentle cruelty in his language. He describes a local priest as "burned not only with the zeal of his vocation but with the fire of tuberculosis," and later laments the budding Aubrey Beardsley as "trapped in an uncongenial job and an unsatisfactory body."

The richest passages of the biography, however, come in the middle chapters chronicling Beardsley's entrance into fame and notoriety. Sturgis displays a thorough comprehension of the artistic and philosophical issues of Beardsley's London, and he does well to illustrate the all-engrossing polemic between the Impressionist and Pre-Raphaelite camps, both of which pulled at Beardsley's pencil. Of course, Beardsley was never the kind of artist who could be shelved away under such rubrics; instead, he stole and stretched images from these more academic masters and combined them with a fetishy Asian exoticism to arrive at designs both structurally crisp and aesthetically sumptuous. Sturgis is thankfully unconcerned with glorifying the artist, frankly disclosing his lies and attempts at self-promotion: "Beardsley's behaviour had been petty and vain. It had also been deliberate. One of Wilde's favourite dicta was that in art 'il faut toujours tuer son pere.'"

If there are any deficiencies in Sturgis' study, they come only at times when he fails to plunge deeper into the philosophy and limits of Beardsley's drawings. For example, he is correct to assert Baudelaire's essay "The Painter of Modern Life" as a seminal work in the creation of the dandy, especially one who is a visual artist like Beardsley, but he also sells it short by summarizing it as a manifesto for the "cult of oneself." Like Beardsley and his art, the essay focuses not so much on the artifice and aesthetic of luxury as on the elusive nature of the present and its relation to history. The painter in Baudelaire's essay constructs a growing mountain of pencil sketches in his hurried and doomed attempt to capture the fleeting present. That's an image that is more accurate in revealing the tragedy and romance of a dandy like Beardsley than any sort of Wildean sexy smartass witticism. Despite missing a few chances to truly legitimize Aubrey Beardsley's work, Sturgis does construct a dramatic and pathos-laden narrative of a life that smelled of sweat just as much as roses. --David Garza 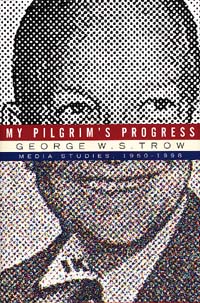 George W.S. Trow's Withinthe Context of No Context, published in 1981, is a cult favorite among students of American pop culture, and for good reason. In it, Trow, a longtime New Yorker staff writer, did two new things. One was to take the popular (non-serious) media of the late Seventies (People, Esquire, Life) and in its own terms closely examine its writing and layout style and the implications of those choices. His style was late New Journalism (Tom Wolfe without the white suit) and featured headlines in bold type to indicate a new thought. The other was to analyze, in a groundbreaking way, what rock & roll and fashion celebrity had become in the early Eighties, in the form of a journal-like story focusing on a few days spent with Ahmet Ertegun, the founder of Atlantic Records. It is titled "Eclectic, Reminiscent, Amused, Fickle, Perverse (Ahmet Ertegun)." Read this.

Trow's new work, My Pilgrim's Progress, is related to No Context in a personal way and is a fascinating step backward in time. Rather than attempt to try and keep up and make a transition from Bianca Jagger to Courtney Love, Trow performs the culturally brave maneuver of analyzing (very closely once more) the culture that celebrity journalism succeeded. This culture is personified by the major political figures of his youth: Winston Churchill, FDR, and Eisenhower. His approach this time is to teach us how to fold and then read the front page of The New York Times. To immerse himself in the dailiness of this period, he copied and read the front pages of the Times from the month of February, 1950. Fast-forwarding from the specific to the cosmic, Trow quickly analyzes what has endured from the "theatre" of the front page in February, 1950: television.

The personal touches begin to edge in when Trow reveals that his father was a New York newspaperman from an old WASP family. Although raised in a family that worshipped the Roosevelts, Trow amusingly describes his love for Eisenhower during the campaign of 1952, when he was nine and wore a cap to school covered with "I Like Ike" campaign buttons. The crush on Ike, whom Trow describes as having "the best Rolodex ever" does not seem to have abated.

Trow reminds us that a political leader in 1950 would likely have been born in the 1890s and therefore would have had an Edwardian childhood. The lag between politics and popular culture clicks into focus when figured in this light (think Ike and Elvis, Jimmy Carter and the Sex Pistols). His thoughts on the Fifties are deep and concerned with surface all at once. The chapter called "Hitch and Elvis" (Hitchcock and Presley) is a bracing approach to understanding how 1950s America both feared its new power in a post-war world and at the same time began producing media and entertainment that changed the rest of the century. So, read this one too, but a warning: The first 56 pages are really nothing but a bunch of throat clearing and dithering about before he gets down to business. --Dick Holland