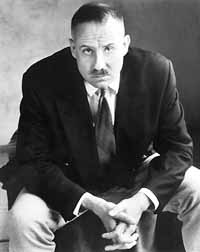 Bestselling crime novelist James Ellroy isn't just another writer who uses post-war Los Angeles as the setting for his stories. Plop yourself down into the hep and hyper hard-boiled groove of one of his dozen noir joy rides and it's immediately obvious that he somehow melted down that era and mainlined it into his soul. The results throb and bop right off the pages, especially in the sprawling sagas contained within the covers of The Black Dahlia, The Big Nowhere, L.A. Confidential, and White Jazz (aka "The L.A. Quartet"). Like a sucker punch on a glass jaw, Ellroy's "alternate history" of that infamous town twangs with the brutal ring of ugly truth. Rodney King and O.J. didn't surprise you at all if you're hip to James Ellroy.

James Ellroy was born in 1948. His father was a shifty Hollywood hustler, his mom an attractive redhead. She was brutally murdered in 1958 by a man she picked up in a bar. James Ellroy was 10 years old. His life, which hadn't been exactly apple pie and baseball to begin with, was sent into a dark corkscrew spiral of drugs, booze, voyeurism, and petty crime. Jean Ellroy's murder was never solved.

Ellroy survived by getting cleaned up and eventually channeling his obsessions with sex, crime, and the scandal-breeding psycho-history of L.A. into writing crime fiction. In 1996, after writing 12 crime novels, and finally reaping some acclaim and success, he confronted his demons head-on: With the help of retired L.A. cop Bill Stoner, Ellroy returned to L.A. and launched a new investigation to search for his mother's killer. The case remains unsolved, but the effort, which he chronicled in My Dark Places, gained him a lot of knowledge about his mother and himself -- and the awesome power of the hold she has on his mind and soul.

The critical and commercial success of the 1997 movie L.A. Confidential, adapted from the Ellroy novel of the same name, surprised no one more than the man who wrote it. Now he's a mainstream success, a writer at large for GQ (also GQ's Literary Man of the Year in 1998), and happily married. It's been quite a journey.

When I first met James Ellroy, The Black Dahlia had just come out, and he was starting to look like a writer who might be going places. Now that he's actually arrived, I wondered whether success, fame, and happiness can mellow out -- maybe even domesticate -- the guy who answers to the nickname Demon Dog of American Literature. "Absolutely, Jesse. The passion remains undiminished, uncontroverted," Ellroy said. With that out of the way, I asked him about his latest book, Crime Wave:Reportage and Fiction From the Underside of L.A., a collection of all the fiction and journalism Ellroy has written for GQ to date.

Austin Chronicle:You've got a story in this new collection titled "Out of the Past." I know you love the movie, and it's also one of my favorites. What's your favorite scene? 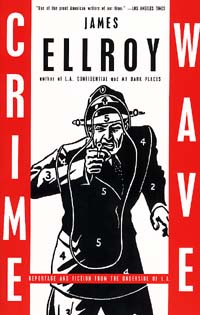 AC:We're a couple of noir guys, aren't we? Speaking of noir guys, how does Dick Contino feel about being a semi-fictional character in your books?

Ellroy: He's diggin' it, he's diggin' it. He's like, Man! Wow! It's 1954 and I'm boppin' around L.A. with Oscar Levant and killin' people! I don't remember doin' that. But I must've done it. Dick's still boppin' around, playing the squeeze box in Vegas, has a much younger girlfriend. Of course, he's featured in the novella Hollywood Shakedown, not to be confused with the earlier novella, Dick Contino's Blues. And Dick's havin' a blast. We talk on the phone every now and then.

Ellroy: Well, read the two Danny Getchell stories in Crime Wave, for example, Jesse. Danny Getchell is a writer for Hush-Hush magazine, the scandal rag that I created for Big Nowhere, L.A. Confidential, White Jazz, and American Tabloid. The stories are written in a dark and darkly humorous alliterative style. And I love writing in that style. Also, I made the conscious decision with American Tabloid to get out of L.A. as the sole locale of my novels. And thus, L.A. of that era is still home to me. Now I get to go back and do an alternative version to my already alternative version of my L.A. Quartet books. I love that style. And I love going back and rewriting L.A. history one more time.

AC:Now that Kansas City is your home, have any representatives of the city approached you about writing an alternative history of Kansas City?

Ellroy: No. But I'm gonna be the chairman of the Kansas City Drive for Pediatric AIDS. I'm gonna go to the gala they have for it, and I get to meet Mayor Cleaver. I get a kick out of that. He's a black preacher turned politician. I like his style.

AC:What do you think would happen if O.J. Simpson read one of your books? Would he recognize himself as a character? I mean, he's definitely a product of your world.

Ellroy: He's definitely a product of my world. The O.J. Simpson stuff could only have happened in L.A. In some ways, as I say in Sex, Glitz and Greed: The Seduction of O.J. Simpson, I'm fresh out of white man's outrage. The LAPD kicked a lot of black ass, the jurors were put to sleep by DNA, which is incontrovertibly accurate. The evidence wasn't in any way contaminated. You can't contaminate DNA evidence in any way in which you get a false reading, and to say it happened is bullshit. But they were given the faulty dilemma of DNA evidence and the LAPD's racist misconduct and they voted the latter. So on one level I can't blame them.

AC:Have there been any new developments in your mother's case pursuant to the experiences you write about in Crime Wave?

Ellroy: No, we still continue to get calls from people who knew my mother, and people offering their wacked-out theories trying to connect my mother's case to the Black Dahlia's case to the Kennedy assassination. Really in all good faith, but you know there are an awful lot of wacked-out people out there. And that's pretty much the extent of it.

AC: L.A. Confidential turned out so fabulously well, I've got to ask you: Has that changed your attitude toward the possibility of other successful adaptations of your books? You've always been pretty jaded about the prospects in the past.

Ellroy: No, I don't even think about it. I just got lucky with L.A. Confidential. It was, in my view, entirely a fluke that it got made in the first place. I was just blessed that the right people -- Curtis Hanson and Brian Helgeland -- got together and created the film they created. And more than the way it goosed my profile and more than the money it made me, more than the books that it sold, I have it to look upon as an artifact. It's something that only I could have conceived in the beginning, executed in such a way that I could never have imagined. So I just got lucky.

James Ellroy will be the featured guest at a reception sponsored by the Austin Writers' League on Tuesday, February 23 at 6pm in the Maloney Room of St. Edward's Main Building. Mysteries & More will host a reading and booksigning at 7pm, following the reception. Both events are held in conjunction with the Department of Humanities at St. Edward's and are open and free to the public.