Memories of My Father Watching TV: A Novel 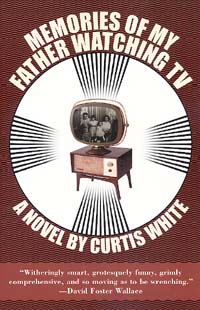 Philistinism runs stronger than ever in American society these days. There's virtually no support for fiction writers wanting to do anything innovative. Nevertheless, Curtis White displays plenty of literary daring in his most recent volume, Memories of My Father Watching TV. White, who teaches and co-directs a publishing program at Illinois State University, expresses in Memories both the amusement and horror that American culture inspires in him.

In the current reactionary political climate, White has his work cut out for him. But guys like him are needed more than ever at a time when the left is so cowed. White's no ivory tower academic; he's been an activist since he was a student in the Sixties, and in 1997 he was the object, as a director of Illinois State's FC 2 Press, of an attack by Michigan congressman Peter Hoekstra. Hoekstra was incensed because the NEA was granting money to the press which not only printed books he considered pornographic, but an advertising blurb as well that made fun of an Iowa state representative, a Republican, needless to say.

White's previous fiction volumes, Heretical Songs, Metaphysics in the Midwest, The Idea of Home, and Anarcho-Hindu, demonstrate his interest in a variety of subjects ranging from major league baseball to Western classical music, from pop culture to "fine" art. He's a skilled technician, capable of employing a variety of language levels.

In his prologue to Memories, White discusses observing his fictionalized father watching TV for hour after hour, day after day, until he reached a comatose state. Individual chapters of his book are parodies of these shows -- "Highway Patrol," "Bonanza," "Sea Hunt," "Combat," "Have Gun Will Travel." These are often very funny. In the "Bonanza" section, for example, the Wild Father, a takeoff on some primordial force-of-nature man, lets us in on some inside information: "First you gotta have hair all over your body. You ever try to grow hair real long and thick on the underside of your arms? Well, it's all in the diet: canned beef tamales, Dinty Moore beef stew, sardines in mustard sauce, potted meat, lots and lots of non-dairy cheese products like Velveeta and Cheese Whiz (eat the Cheese Whiz straight from the aerosol container, boy), SPAM (don't cook it)..."

White uses this humor in the process of what is his scathing critique of American capitalism. He's a Marxist-influenced, postmodernist writer, but you don't have to know about Marcuse, Derrida, and Jameson to see where he's coming from. White's work has a surrealistic, hallucinatory quality. More specifically, it's absurdist in the tradition of William Burroughs, Joseph Heller, and Terry Southern.

In Memories, White makes fun of a few specific companies and products -- Cheese Whiz, Pall Mall cigarettes -- but employs a broader, more subtle strategy as well. He believes that American corporations use TV to foist their values on viewers, to deaden their intelligence. By using humor in the process of pointing out the aesthetic shoddiness and mind-numbing potential of TV, White hopes to lessen its effectiveness. The art of the book is in creating an alternative to the TV dramas. 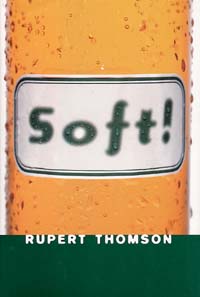 Rupert Thomson is a big tease. In Soft! he creates a multi-tiered satire of hit-men and target marketing. Like Nick Hornby, another hot UK import these days, Thomson's detail and tactile observation are powerful tools -- we can really feel the plush, new carpeting beneath our bare feet, bask in the late-afternoon sun reflecting off a living-room wall, or smell knifeblades in cold air. And like Hornby in High Fidelity, Thomson tantalizes us with familiar moments -- only to abandon us just when things are getting really interesting.

Soft! is an orange-flavored beverage that is about to be introduced in England. Ambitious young marketing executive Jimmy has an idea to boost his career, and help make his company's latest beverage a hit. He wants the firm to build word of mouth for Soft! through subliminal sleep messaging -- brainwashing, in other words. Jimmy's aggressive boss, a marketing director newly arrived from the States, likes the idea.

Around this time, Dodds Barker leaves Plymouth for London by bus. Set up with a rent-free apartment, he's one of those blue-collar wrecks who turn up early and often in Martin Amis novels. Barker is strictly small-time. He doesn't want to be bad, but he just can't resist. You just know he is going to end up owing the wrong people favors. Sure enough, a shadowy figure called Lambert materializes, with a non-negotiable task -- Barker must kill a young woman.

The girl is Glade Spencer, a 23-year-old Soho waitress. Forlorn, she feels her life is like an empty parking garage -- lots of space for visitors but nothing interesting within. Breaking her routine, occasionally, is a Miami-based boyfriend, Tom, who's always flying Glade to the U.S. She needs a bit of extra money to buy a dress to wear to a wedding in New Orleans. For £100, she volunteers for a weekend sleep behavioral study, with disastrous results.

Structurally, Thomson breaks up his story into three distinct sections, introducing us to these three characters one at a time. Then he converges their storylines, which is a very disappointing effect. It's a bit like having a Thanksgiving feast in which you are forbidden from eating your turkey until you've finished all your cranberry sauce. Why not sample sporadically from the whole plate, for maximum enjoyment?

Though the flavor remains, the ending is as flat as week-old ginger ale. Thomson sets up a class-conscious pop culture satire worthy of Amis, mixes in some very vivid images, develops characters you really do want to know more about, then -- just like a Super Big Gulp never can quite beat good old, cold water -- leaves you thoroughly unquenched.

The Farming of Bones 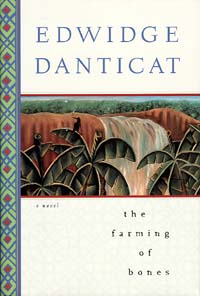 There is something remarkable about Edwidge Danticat. It could be her disarmingly innocent face which "looks too youthful to hold a past," as she has described a character in her own writing. Then there's the fact that her first novel, Breath, Eyes, Memory, was published to critical acclaim when she was only 25. Just before the age of 30, she was a National Book Award nominee for her collection of short stories, Krik? Krak!, and in 1996, she was cited as one of the "Best Young American Novelists" by Granta. Perhaps what is most remarkable about Danticat is that she consistently turns out work that is at turns compelling, beautiful, and breathtakingly painful. Such is the case with her newest novel, The Farming of Bones.

Set in 1937, during the regime of Generalissimo Rafael Trujillo in the Dominican Republic, The Farming of Bones tells the story of a nearly forgotten event in history: the "cleansing" of the Dominican Republic of Haitians to protect the "purity" of Dominican culture. The cleansing resulted in the massacre of countless Haitians -- mostly itinerant sugarcane field workers or servants for wealthy Dominicans.

Amabelle Désir, the book's narrator, is a faithful, Haitian-born maidservant. Orphaned at a young age, she is taken in by a well-to-do Dominican family as a companion to the family's daughter, Valencia, a girl near Amabelle's own age. When the book opens, the girls are adults, and Señora Valencia is the wife of an ambitious military officer.

Other reviewers have hailed The Farming of Bones as a lush and lyrical tale of love and survival in the face of unspeakable violence. While it is this, the book is so much more. In her evocative and steady narrative, Danticat re-fleshes ghosts, and bears witness to the past. The testimony of her book echoes most profoundly in a scene following the massacre. To make peace, the government assigns officials to gather survivors' tales and offer money to those who lost family members. Amabelle and a friend travel into town to share their stories with hopes of learning the fate of missing loved ones. After many days of waiting, of being turned away, then discovering that those who told their stories would not receive compensation, the collection of survivors' tales unceremoniously ends, causing a riot to erupt: "A few of the soldiers were caught and passed from hand to hand as blows were struck, but the crowd was not really interested in them. The group charged the station looking for someone to write their names in a book, and take their story -- they wanted a civilian face to concede that what they had witnessed and lived through did truly happen."

In the civilian pen of Edwidge Danticat, the story of the Haitian massacre is revealed, making The Farming of Bones an astonishing book by a gifted, compassionate, young writer. 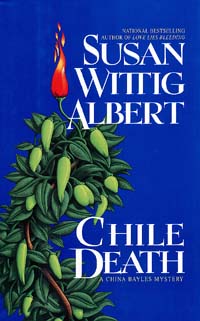 Texas chili fans often give their creations names such as "Inferno" and "Red Death." And for all of the posturing about their chili of doom, in Chile Death, Austin author Susan Wittig Albert's seventh book in the China Bayles series, no one is more surprised than the cooks when one of the judges at the annual Cedar Choppers Chili Cookoff dies in harness.

China is a reformed lawyer, practicing herbalist, and small-town sleuth in the fictional Central Texas hamlet of Pecan Springs. The man "dead from a bowl of red" is Jerry Jeff Cody, Pecan Springs' leading insurance salesman and married playboy. After 15 years of marriage, Jerry Jeff and his pretty wife Roxanne are on the cusp of a messy divorce. Roxanne is madder than a boiled squirrel and everyone in town knows about it.

When suspicions arise that it was peanut consumption, rather than a heart attack, that felled Jerry Jeff, China and her longtime beau McQuaid decide to find the murderer. Of course, there may be a little guilt involved. China and McQuaid were among the guffawing crowd as Jerry Jeff clutched his throat and staggered around the tasting tent.

China fits the search for Jerry Jeff's murderer into her regular life. These days China is spending a lot of time with McQuaid at The Manor, a local nursing home. Former policeman McQuaid is recuperating from a recent gunshot wound to the spine. China is also running her herb shop, Thyme and Seasons, and is taking care of McQuaid's 12-year-old son Brian.

Although McQuaid's recovery is going well, there are other problems at The Manor. It seems that some of the residents had some, er, "special care" directing them how to dispose of their life savings. Manor director Opal Hogge has even been seen shaking Miss Velma, a patient in the Alzheimer's wing.

Although Chile Death is a book in a continuing series, it isn't a difficult read for someone unfamiliar with the earlier works. But there are several problems with Chile Death, including the author's handling of disability issues. My original reaction to the treatment of McQuaid's disability -- a wheelchair-bound McQuaid doesn't want to marry China (after asking her for years) since he doesn't know if he will ever be able to walk again -- was outrage. After all, that sort of thinking went out with An Affair to Remember. Upon reflection, though, the portrayal might not be so inaccurate. Often people who become paralyzed have trouble adjusting, and so perhaps this aspect of Chile Death may be read as a sensitive portrayal of a difficult psychological adaptation.

But one of the more annoying scenes of the book is at the end. China gets trapped in an old barn, and is faced with a zealot armed with gasoline and a match. It's just the kind of situation that the fool Nancy Drew would get herself into. And since Albert has ghostwritten a few Nancy Drew books, this similarity isn't surprising. Just call it "The Clue in the Combustible Barn." All things considered, the problems in Chile Death are minor. The book is extremely well-written, and the clues are well-integrated into the fabric of the book.

It may just be time for a big, steaming bowl of Chile Death. -- Anna Hanks