What have some local writers and literary folk been reading this year and how have their readings influenced their own work? You have some of the answers from our critics who are also writers, like Jesse Sublett, Marion Winik, and Tom Doyal. But casting the net a bit further among some Austin literati became a jumping point for so many other topics. Below are the mostly off-the-cuff and condensed responses of those polled in this necessarily limited sample.

Historical novelist Elizabeth Crook: You know, it's weird but reading for pleasure is so difficult for me because I start feeling like I should be getting something out of it, so I either read something that I feel is going to inform me of my time period or something where the writing is so exceptional that I feel like through osmosis I'm somehow influenced. The one I actually enjoyed the most, though it's a little embarrassing to say so, is Villette, which is a novel by Charlotte Brontë and so it's one of those old-fashioned romances.

Novelist Carol Dawson: I'm re-reading, as I do frequently, all the novels of Penelope Fitzgerald. At the moment, I'm re-reading Innocence -- this will probably be my third go-round with most of [her books]. She's so damn good. For the book I'm working on right now, I've been reading several dancers' autobiographies.

Southwest Texas State professor and writer Tom Grimes: One of my favorite books has been the Tao Te-Ching with a translation by Steven Mitchell; it just shows you the importance of decent translations. He's been criticized for it because he doesn't speak the language or read the language -- he works from literal translations and then turns it into kind of poetry and I think that's really a beautiful book.

I can tell you I hated the Tom Wolfe book -- it had absolutely no dramatic tension whatsoever, it was redundant to the point of sort of lunacy, it was not edited, there were phrases that were repeated without seeming intention within a page or two of each other, and there was an entire subplot of 200-odd pages that could have easily been cut and if it wasn't Tom Wolfe and the mechanics of commerce weren't in place to make this an automatic #1 bestseller, any editor would have said, "Well, we're going to cut these 200 pages out because they're completely unnecessary." And he's a good journalist but I think that the book was no more than ... it should have been two pieces in Rolling Stone on Quail Country and Atlanta. And that was it; he has absolutely no sense of how to create a literary character. So I just thought it was appallingly bad.

Writer Stephen Harrigan: For much of 1998 I was preoccupied with finishing a long novel about the Alamo, and so I had a professional curiosity about Gates of Fire, a recent historical novel by Steven Pressfield about another glorious military debacle, the battle of Thermopylae. I expected this book to be a one-dimensional toga epic, but to my surprise it was artfully researched, passionately written, and unexpectedly moving. 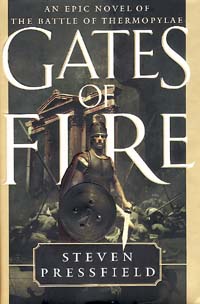 Columnist and author Molly Ivins: I think extraordinary in fiction [is] a ... book called The Poisonwood Bible by Barbara Kingsolver. I just was really knocked out by that, what a stunning book. You could pair Kingsolver's book with an extraordinary piece of nonfiction called King Leopold's Ghost by Adam Hochschild, which is an ... account of this sort of lost holocaust that occurred in the Congo between 1890 and 1910 when the whole place was the private plantation of King Leopold of Belgium. If you pair those two books, it's just stunning.

Suspense novelist David Lindsey: I'm presently re-reading a book on art ... as research for my next novel, and it's called The Seduction of Venus and it's about artists and their models. It's basically a look at the psychology and the dynamics between an artist and his model and what that means for his or her work. Usually my pleasure [reading] ends up being my research or vice-versa.

SWT professor and writer Debra Monroe: Ted Solotaroff's memoir Comes in Blows and a book by Sharon Oard Warner called Learning to Dance ... I like the emphasis on moral complexity.

Young adult and children's author Louis Sachar: I actually have a lot of free time, I just have trouble finding books I like. ... I read The Unconsoled by Kazuo Ishiguro, I really liked that, and a book called Jip: His Story by Katherine Paterson. The Unconsoled was an interesting book; it was very slow reading and probably if I wasn't on a plane when I read it, I might not have even been able to get through it, but it's just stuck with me more than any book I've read in a long time. The more I think about it, the more I like it. It's kind of like a dream reality that I just thought was brilliant. And Jip: His Story is a young adult book that really moved me.

Director Cyndi Hughes: My best "scream" read was Bridget Jones's Diary, by Helen Fielding. At last! Something to fill the Absolutely Fabulous void. The best book about Texas has to be Lone Star Swing by Duncan McLean. Music history meets Texas travelogue when a Scotsman sets off on his search for the spirit of Bob Wills. Spot on. My favorite book by a Texas author must be The Tennis Partner, by Abraham Verghese. It's a tough, uncomfortable, yet fascinating read.

Honorary chairwoman Laura Bush: It just happens all three of these are memoirs, which I do like to read a lot. ... Right now, I'm reading Laura Furman's book Ordinary Paradise, which I think is a really, really beautiful book. ... I loved Abraham Verghese's The Tennis Partner ... I thought he was really great at the Texas Book Festival. I've read one of our writers that we invited to the Texas Book Festival but he didn't come -- he's not a Texas writer, he was one of the writers from out of Texas that we invited -- and that's Roy Blount Jr. and his book [is] Be Sweet. Chairwoman Mary Margaret Farabee: I kind of got into memoir/biography mode this year. Of course, I read Angela's Ashes because I hadn't read it. ... Joseph Skibell's Blessing on the Moon ... is very wonderful and moving, almost in a surreal way.

Mystery writer Mary Willis Walker: I've been reading lots of true crime because I like it and because I'm on the Edgar Committee to select the best of the year. Two of my favorites are Tough Jews by Rich Cohen and Greentown by Timothy Dumas. When I am involved in a fiction of my own making, I gravitate to reading non-fiction.

Writer Lawrence Wright: Most of my reading time is devoted to two extraordinary unpublished manuscripts by friends of mine. One is The Shield of Achilles, Philip Bobbit's masterful two-volume account of the evolution of the market state and the implications of that development for national defense. Philip is on leave from the UT Law School, serving in the National Security Council in the White House. The other is The Gates of the Alamo, Stephen Harrigan's long-awaited definitive novel of the signal event in Texas history. It's an awe-inspiring and perfectly marvelous work. ... And for my own dismal amusement, I've been reading the congressional impeachment proceedings of Andrew Johnson. The parallels with the partisan warfare that is going on now are quite stark and revealing, and also encouraging, in the sense that the nation survived a vengeful and misguided political catastrophe once before.

Mystery writer Tom Zigal: A couple of books come to mind. I don't remember any book that just completely blew me out of the water this year except for maybe Underworld by Don Delillo. Delillo, I think, is just one of the best in the country, always, and he's so slyly funny and the language is so unique and this to me was like 50 ways of looking at the word "underworld," you know, everything from toxic waste garbage, mobsters, Hades -- it's just a marvelous, big book full of very wonderful language ... and God, it doesn't really ever come together as far as I can tell, but it was a really pleasurable read.