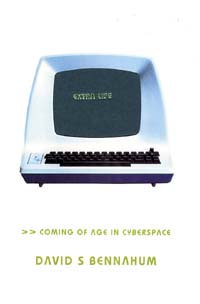 David Bennahum's reading for his new book Extra Life: Coming of Age in Cyberspace (Basic Books, $23 hard) was more like a reunion of an Eighties computer users group than a literary interchange. That's entirely appropriate, though: In Extra Life, Bennahum, a staff writer for Wired magazine and the publisher of MEME, an Internet newsletter, shows us what it was like to be a kid during the PC revolution. And who ever thought that computers could be written about autobiographically? Bennahum, obviously; having recently turned 30, Bennahum is just the right age to write a book about growing up with computers while coming of age during the era of disco, Apple, and DOS. Extra Life is a nostalgic account of the author's early memories of Pong and his childhood encounters with the first personal computers.

At Bennahum's reading, it was clear from the extensive audience interaction and knowing laughter that Bennahum had hit a chord with his crowd of about 15 technophiles. The chapter Bennahum read covers his experience of choosing a first computer, a present from his father upon his bar mitzvah. For Bennahum, the process of choosing that first computer is a literary voyage back to childhood; he examines detail by detail the various benefits of machines like the Commadore PET, TRS-80, and Apple IIe. He eventually chooses the Atari 800, a computer whose strength is its ability to play games, which just so happened to be the author's childhood addiction. When he finally receives the Atari, Bennahum discovers the other side of the computing coin: the creative, self-empowering world of programming.

During the post-reading discussion, Bennahum said modern-day personal computing is not as open to experimentation by children as it was when Bennahum was growing up. Computers are everywhere, and advances in technology have restricted most people to being a user, thus making programming largely inaccessible. Bennahum points to the early Eighties as a time when amateurs ran the show. A world of 300-baud modems, BASIC programming, and dial-up bulletin boards full of shareware and pirated software let those crazy kids run wild.

Like death and taxes, computers are here to stay. Bennahum has not written a jargon-laden, historical tome, though. A book like Paul Ceruzzi's A History of Modern Computing is more suited to that task. Extra Life, rather, succeeds as a history of one person's ride through a fascinating, technological moment in time and a nostalgic look at the world of computing in a simpler time. --Rod Machen