The Natural Center of Gravity

Tweet
print
write a letter
For writers aiming for literary magazine publication, rather than a row of 10s at a poetry slam or even the approving applause of peers at an open mike, the process of showing off work doesn't feature that aspect of immediate gratification. A poem or short story or essay is perfected over weeks, even months, of drafting. The writer gets a manila envelope, and the all-important self-addressed stamped envelope for the reply, and sends the work out in the mail. Time passes. Lots of time passes. Thousands of people are engaged in this very same act, causing a pile-up on the nation's lit-mag desks... and even more time passes. Even those writers who have made it to a graduate writing program, who presumably have a leg up on Joe and Jane Hack, have known all too well that the anti-climax begins once the envelope is licked, and usually lasts for a couple of months.

Andrew Osborn and Vincent Lozano have walked that road. Osborn earned his M.F.A. from the top-ranked University of Iowa Writers' Workshop program, and Lozano started his graduate work at Columbia before completing his M.A. (and his Michener post-graduate fellowship) at the University of Texas. But despite their involvement with graduate writing programs, they had ready outlets in Iowa City and New York City to keep them acquainted with the sound of two hands clapping.

"There was a regular reading series at Columbia," Lozano recalled. "We'd have night readings at the Night Cafe, a bar on Amsterdam Avenue, and sign up to read. It wasn't a particularly original idea, but it seemed like an odd omission in the writing program here, not having a similar series."

"We had something like that too, called Talk Art Cabaret. It was in a divey restaurant, kind of like the Green Mill in Chicago where the poetry slam started, and we'd have music and poetry," Osborn added. "It was a way for Workshop people to air new stuff, and to interact with the rest of the community. I even hosted for a couple of nights. I stunk. I got self-conscious. I've just never been much of a show person. I'm a nervous guy."

Yet Osborn and Lozano, for the past year, have placed themselves in the host role in establishing Utter. The monthly reading series, held at the Austin History Center, is unlike any other regular reading series in town in that it seeks to place writers from the academic community into a room where they can read to the community at large. They founded it as an outgrowth of a
20th-century poetry study group that Osborn started after entering UT's Ph.D. program in English. As the series has grown, it has taken in writers from outside the pool of UT graduate students, yet has still kept to its same basic formula of featuring works-in-progress by writers who write with a literary magazine audience in mind. Or, as Osborn says, "If it doesn't work well on the page, we start putting the brakes on. Otherwise, it might start being like the other readings in town."

Not that there's anything wrong with that, they hasten to clarify. But Utter has quickly and decisively carved out its own niche, with a mix of poetry, fiction, and personal essay writing, by drawing an audience largely composed of academic community members who don't venture out to other venues. Eric Lupfer, a UT grad student in English who has read personal essays at several Utters, including last month's, said, "At a lot of other readings I've been to, the audiences just seem polite. At Utter, they're more than that -- they're supportive, and actively engaged. As a reader, it's pretty clear from their reactions as to which lines work and which lines fall flat."

Although the readings are often helpful for the writers, the consistently high level of work they produce means that the audience isn't a bad place to be either -- especially on those nights when diverse readers shine diversely. At the February reading, for instance, UT English professor Tom Cable, a medievalist who focuses an entire graduate class on dissecting poetic meter, read a series of tightly crafted, ship-in-a-bottle sonnets where he, as Lozano gleefully recalled, "based them on Keatsian poems and rebelliously changed the rhyme schemes." Several readers later, St. Edward's University writing instructor and former police officer Lori Drummond read a riveting chapter from her novel-in-progress, graphically detailing a brutal murder based on her days in the force in Baton Rouge, Louisiana. With Cable's work, the obvious question was "How did he work that into a sonnet?," whereas with Drummond, the obvious question was more along the lines of "How did she stay sane after witnessing that crime scene?" Yet within the parameters of their genres, both works held an unmistakable integrity, and on the mike, the authors did the works justice.

Last month, Utter featured playwriting for the first time. Lisa D'Amour, an M.F.A. student at UT's Texas Center for Writers, brought in a group of actors to read from her surreal, jump-cut play, placing a character named Marsupial Girl in a West Texas setting. The experiment worked well for Osborn and Lozano, but re-introduced recurring questions about performance-oriented work versus work for the page. They're not the only UT affiliates who see the two, not-necessarily-exclusive areas as a site of struggle. Last month, UT English professor Kurt Heinzelman's graduate post-lyric poetry seminar spent a class session debating whether or not there are differing standards for performance poetry, as opposed to what gets tagged `academic' poetry, subsequently musing on the implications of those standards for poets trying to gain entry into the literary magazine and publishing arena. With Heinzelman and several members of his class already having read at Utter, the question will inadvertently linger for them in any room with a microphone in it, but especially at Utter.

What Lozano sees the potential for is an image he's grafted from architect Charles Moore. "He talks about immaculate collisions between what's perceived as highbrow and lowbrow. I really like that idea of marrying the sacred with the profane. My hope is that we achieve some of those immaculate collisions. We've already got the perfect room for it. There's a chandelier in the room, and portraiture of Austin burgers watching over it. It's been nice to see some of the work that's been in here so far with this room as a backdrop." 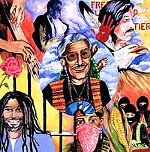