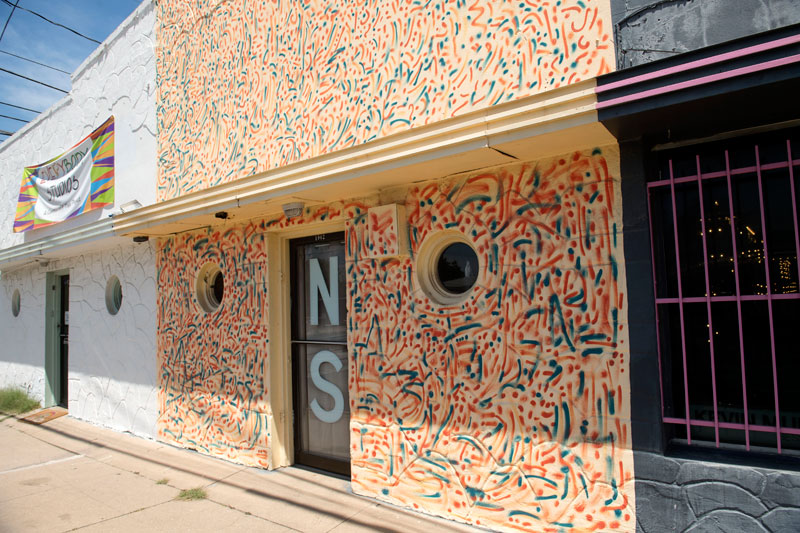 What do you do when it's unsafe for people to come see art inside your gallery? Just put the art outside. That's what Northern-Southern Director Phillip Niemeyer has been doing during the pandemic. Office building parking lots, neighborhood cul-de-sacs, creek beds, golf courses, greenbelt trails, vacant lots, utility poles, parks … all these and more have been showplaces for art in the gallery's recent exhibits. The move has not only encouraged artists to be inventive and playful in creating works for the great outdoors, but since the only way to find them is to follow maps provided by Northern-Southern, it's turned going to see art into a true hunt for treasure.

Mobley demonstrated his multi-instrumental musical prowess during a year ravaged by unprecedented uncertainty. The Austin dweller brought together a stacked roster of 30-plus local artists for a raw, collaborative visual album (A Home Unfamiliar) last July, then followed up with a one-man/one-van curbside tour to promote his “James Crow” single. Its sponsoring EP, February’s Young & Dying in the Occident Supreme, tackles a growing list of unjust practices common here stateside across 19 blistering minutes. He even went viral on Twitter after sharing a story about reconnecting a homeless woman with her sister. The ever outspoken independent artist only used the moment to promote empathy. 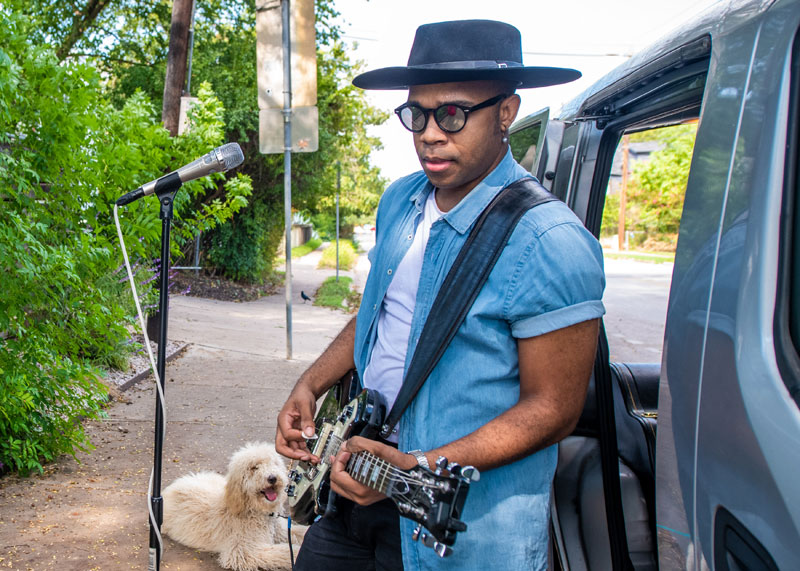 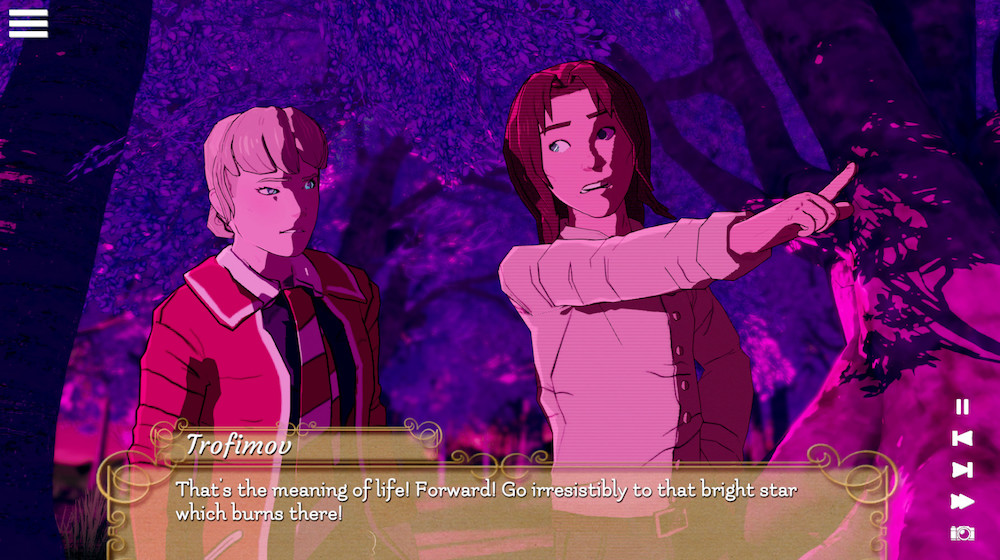 Manuela Malasaña's gently interactive digital adaptation of the Russian playwright's final work leans heavily into the "theatre of mood" concept. Its vaporwave palate and visual balance of comedy and tragedy helps the critique of aristocracy go down a bit easier without losing its farcical bite. Best of all, you move the action and dialogue along at your own pace, so you can enjoy the symbolic story. Is it a video game? Kinda. But is it art? Definitely.

Best Prescription for Community
Raasin in the Sun

Still suffering a case of quarantine blues? We advise a slow drive-by of the underpass on Lamar at W. Fifth, where the walls are covered with art aimed at curing what ails you. Muralists Samara Barks, Kimie Flores, Niz G, Rex Hamilton, Carmen Rangel, and Uloang address health and self-care with the messages "Reconnect Yourself," "Rest Is Necessary," and "Be Well" alongside peaceful images of people floating, sleeping, and holding flowers (or having flowers for heads). This pandemic project was curated by Raasin in the Sun, the namesake nonprofit of former UT track star and Olympian Raasin McIntosh, and is right in line with its other good works such as cleaning up East Austin neighborhoods, planting gardens at schools, and partnering in murals about Eastside history. In action and images, this organization is making our community better. 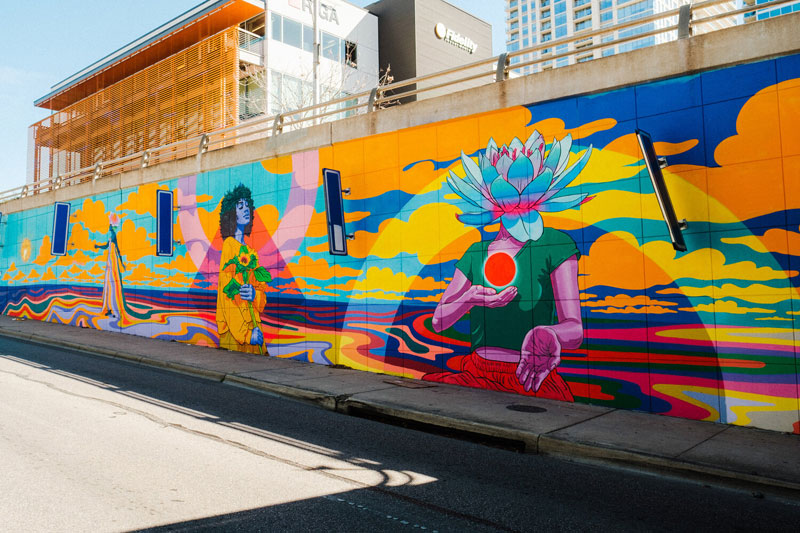 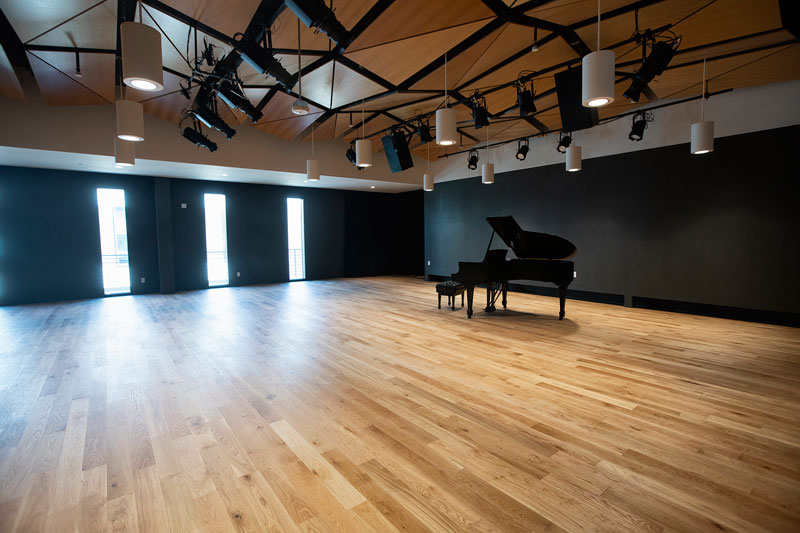 For its first 53 years, KMFA was all about the audio: sending classical music out to the world, being heard but not seen. That's changed with the opening of the radio station's new 18,000-square-foot facility; it was designed for the world to come into and see classical music being played and made. Visitors can watch on-air hosts spin Bach and Bartok through large studio windows, make sounds and rhythms with a junkyard of instruments in the art gallery's “Sound Garden” installation, and enjoy musicians performing live in the intimacy of the 135-seat Draylen Mason Music Studio. Seeing music is so integral to KMFA's new home that sheet music and sound waves decorate the walls. 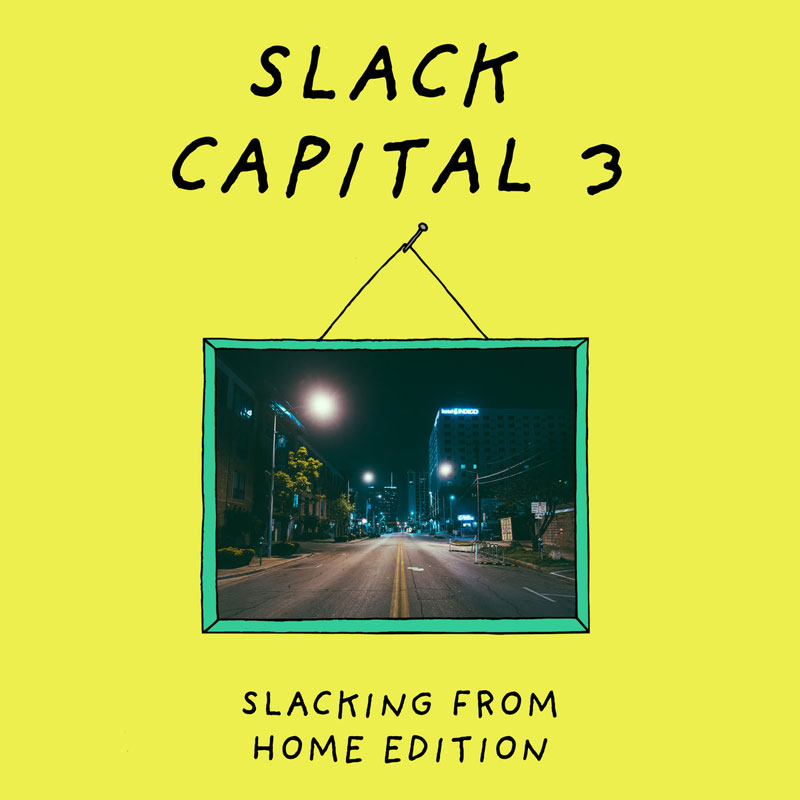 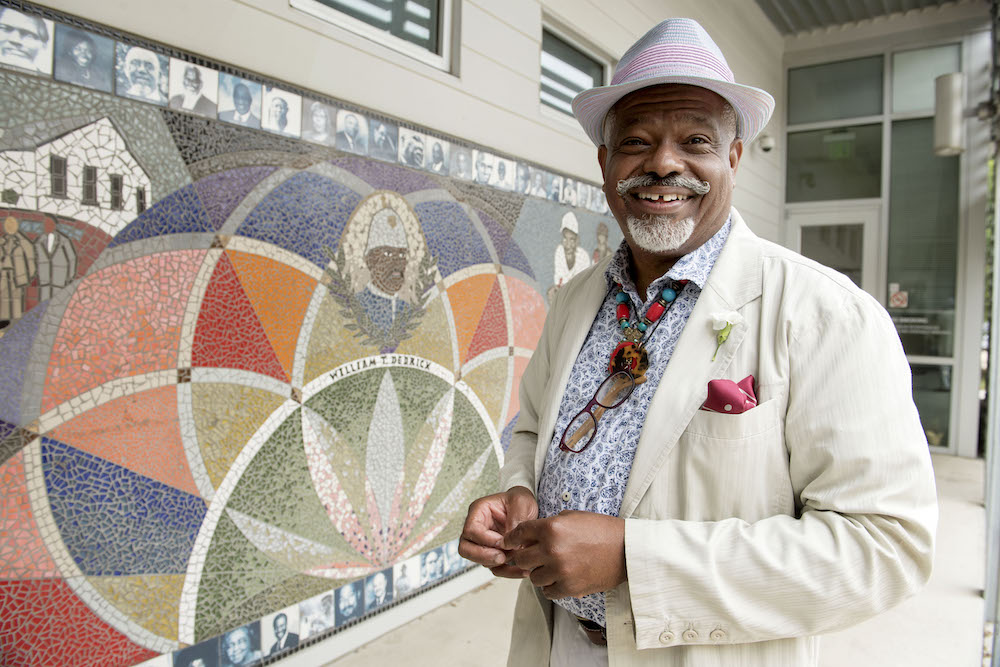 Austin changes so rapidly that it feels like every time you blink, a piece of its history slips away – nowhere more so than in East Austin, where waves of condos and hipster bars are sinking the past. Fortunately, we have Harrison Eppright. He's been soaking up Eastside history for six decades – the time he's lived through, but earlier times as well – and he's always eager to share it. The Victory Grill, Downs Field and the Negro Leagues, the city's “1928 Master Plan,” Juneteenth in Austin, Evergreen Cemetery – he knows all about them and more. As Visit Austin's manager of visitor services and tour ambassador, and tour docent for Six Square: Austin's Black Cultural District, Eppright is well-positioned to ensure we remember the East Austin that was.

When the inevitable National Coronavirus Museum opens in 20-odd years, they'd do well to acquire Marshall Tidrick's entire COVID body of work. The local photographer has spent the pandemic shooting Austinites in front of their homes and pairing the images with offbeat details: “When I arrived, they rolled me a beer from a safe social distance,” reads one Instagram caption. Some folks stand alone, some with roommates; some cradle new pets while others carry clear Zoom fatigue in their eyes. It's a striking collection of our different experiences throughout this ordeal, and each photo is drenched with empathy from the artist behind the lens. 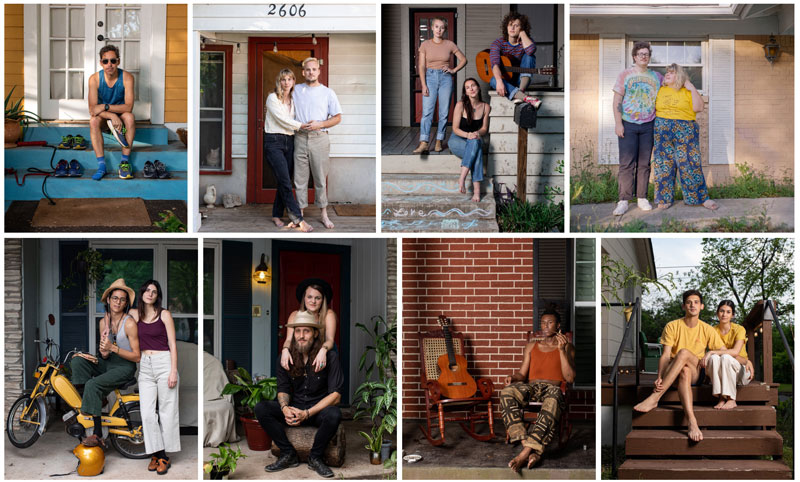 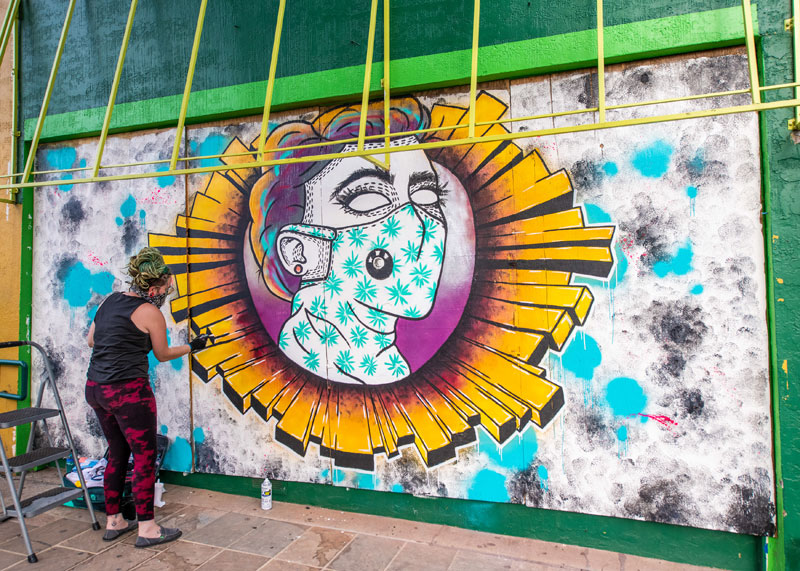 With South by Southwest canceled and virtually all businesses closed due to COVID-19 shelter-in-place orders, Downtown Austin had never looked so desolate. Boarded up buildings along Dirty Sixth made the normally bustling corridor feel particularly haunting. True to their moniker, the HOPE (Helping Other People Everywhere) Campaign rallied local street artists to paint inspirational murals – touting messages of unity, perseverance, and public safety – over the plywood, transforming a grim scene into a gallery of (what else?) hope when we needed it most.

Allen Danziger – aka Jerry the van driver in the original Texas Chain Saw Massacre – laughs when he gets called famous. He once joked that a famous guy would be immortalized with a bobblehead. So he had them made. The former social worker and Three Ring Service owner hasn't acted since Chain Saw, but is happy to autograph your bobblehead, which speaks a line from the film. Which one? He's not saying, but we're betting he's "goofing" on us. 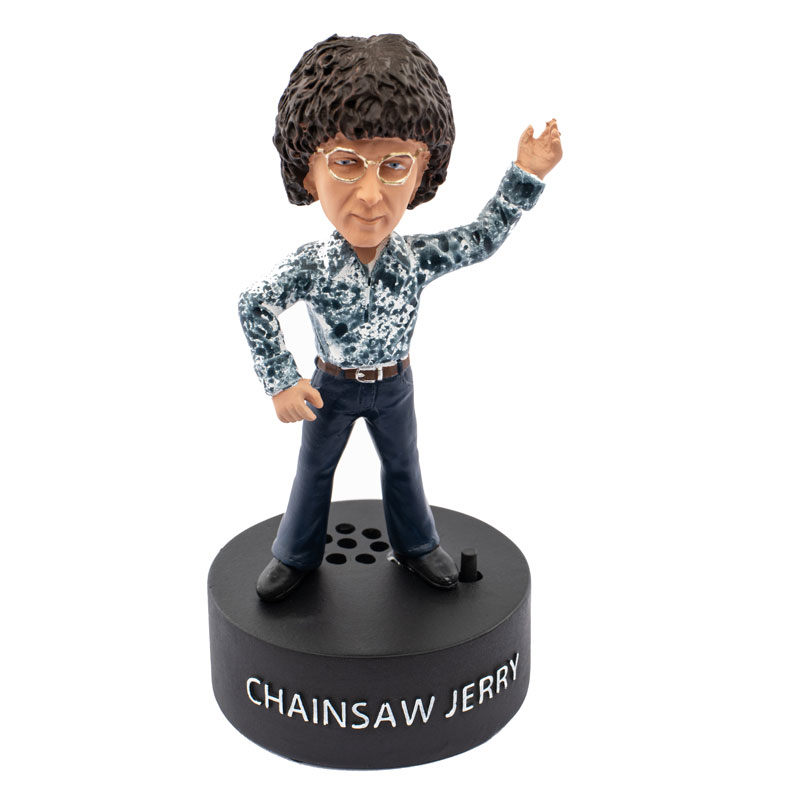 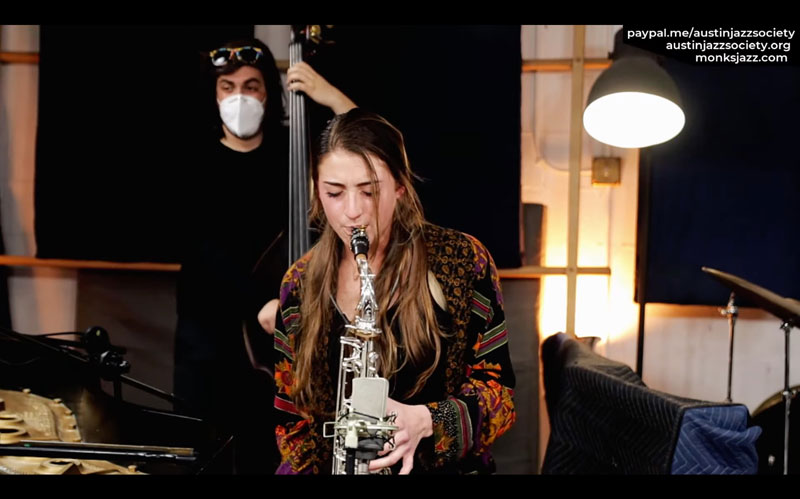 Due to the pandemic, there’s been a change of venue: Hard bop has gone virtual. Monks Jazz is known for its DIY pop-ups in some unlikely Austin spots (bike shops, off-hours art galleries), but their latest listening room turns out to be your own living room. Monks founder Collin Shook has been livestreaming performances from his East Austin Piano Shop featuring some of the finest jazz players (including Shook himself) in Central Texas. There's no cover charge, but donations are welcome, and Tuesday nights are in partnership with the Austin Jazz Society to help raise money for out-of-work musicians.

Just because you've seen the Tower and the football stadium, don't think you've seen UT. Seeing buildings isn't the same as seeing the history behind those buildings or the institution that placed them there. The Racial Geography Tour, created by the university's Vice Provost for Diversity Dr. Edmund T. Gordon, visits campus landmarks from the Littlefield Home to the Etter-Harbin Alumni Center to reveal how the Confederacy, Jim Crow, segregation, racial and sexual discrimination, and authoritarianism influenced what got built and who got honored on the Forty Acres. Originally given live, the tour is now available online, giving every Longhorn an invaluable way to understand UT's past and truly open the eyes of Texas. 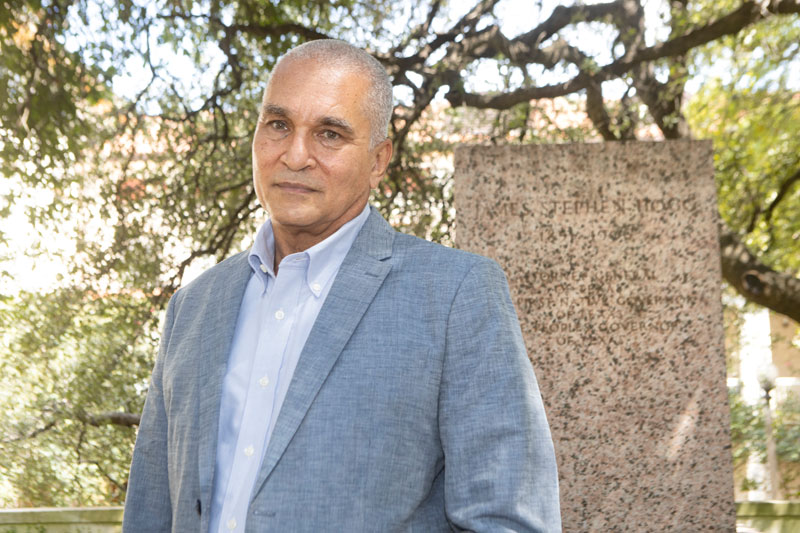 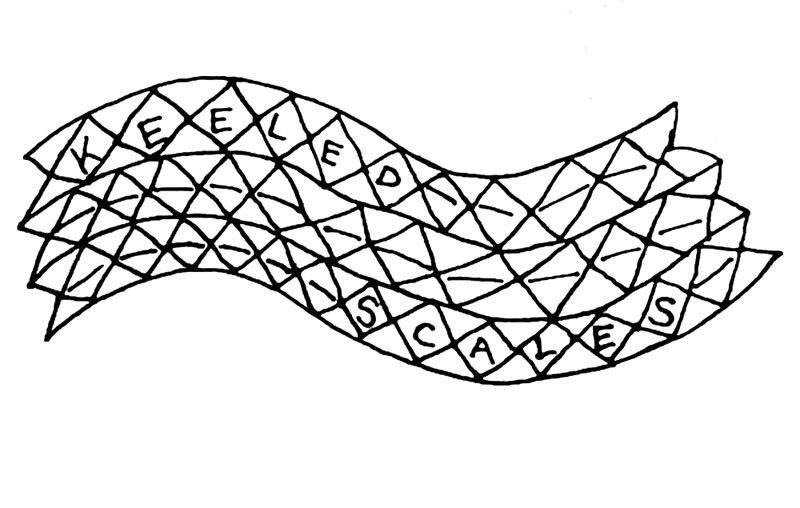 Over the past seven years, local indie imprint Keeled Scales has quietly built up a stacked roster and tastemaking reputation for a certain songwriter niche. Label head Tony Presley presents as unassumingly as his artists, but services an incomparable ear for underrecognized and deeply sincere songcraft, waxing local standouts (the Deer, Sun June, Jordan Moser, Will Johnson) and nationally acclaimed alt-folkers (Buck Meek, Twain, Erin Durant, Katy Kirby). Presley’s picks are building a community among the hushed house show contingent and launching them to bigger but no less enthralled stages.

Mike Villalobos, known to his viewers as LobosJr, is no slouch with a guitar, having spent time in local bands. He's also beaten the notoriously difficult Dark Souls series enough times to laugh in the face of the games' most enormous and deformed enemies. Finding ways to make the games more difficult takes up much of the streamer's time. Picking up his Ernie Ball Music Man JP7, mapping notes to controller buttons, and beating the original Dark Souls was next level showmanship. The "song" he made in the process was even catchy at times! 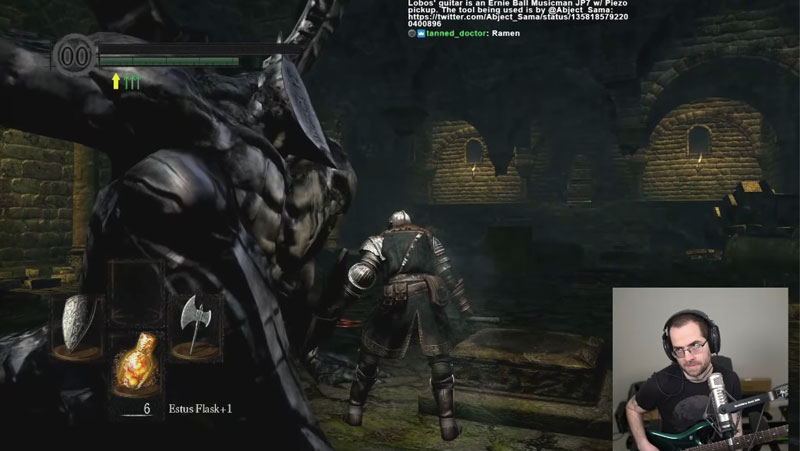 The fat tomes about Willie, Selena, and Stevie Ray ought to be enough to rate this long-overdue award, but the former Texas Monthly scribe digs deeper in 2019's Austin to ATX: The Hippies, Pickers, Slackers, and Geeks Who Transformed the Capital of Texas and 2020's The Ballad of Robert Ealey and His Five Careless Lovers. Need more proof? Listen in Saturday nights at 7pm for his Marfa Public Radio show Texas Music Hour of Power for the stone-cold truth about the groove.

Who's that shambling down your street? That would be the zombies of AMC's zombie megafranchise. For the last three seasons, Fear the Walking Dead has filmed in and around Austin, hiring local talent, keeping local vendors busy, making honorary Austinites of its stars – and this year, they've done it all as a pandemic raged. A zombie plague that has helped keep Austin's film crews safe and working? Sign us up to get bit. 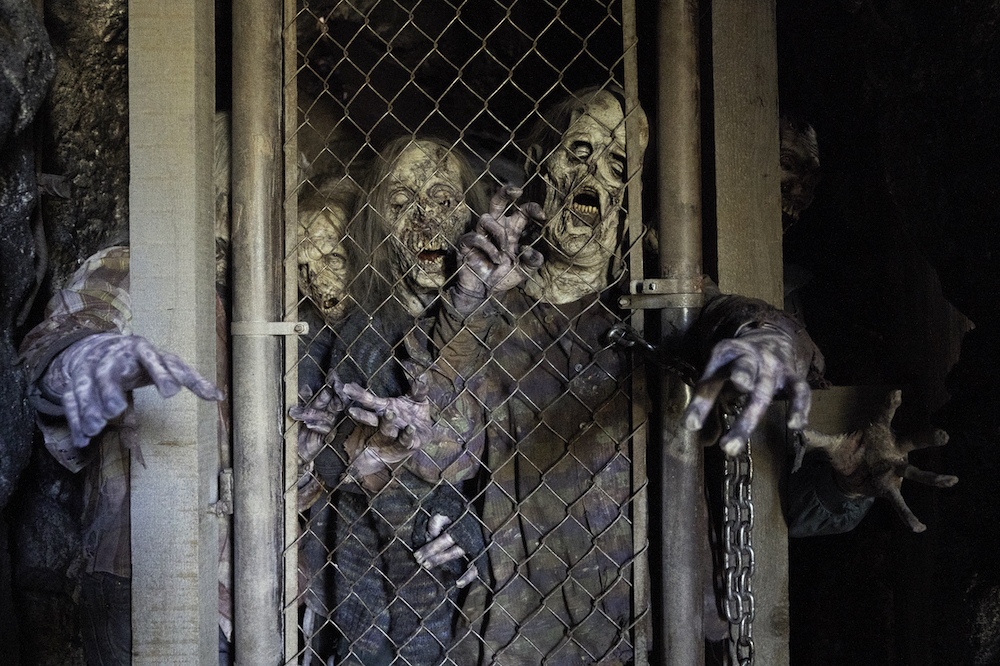 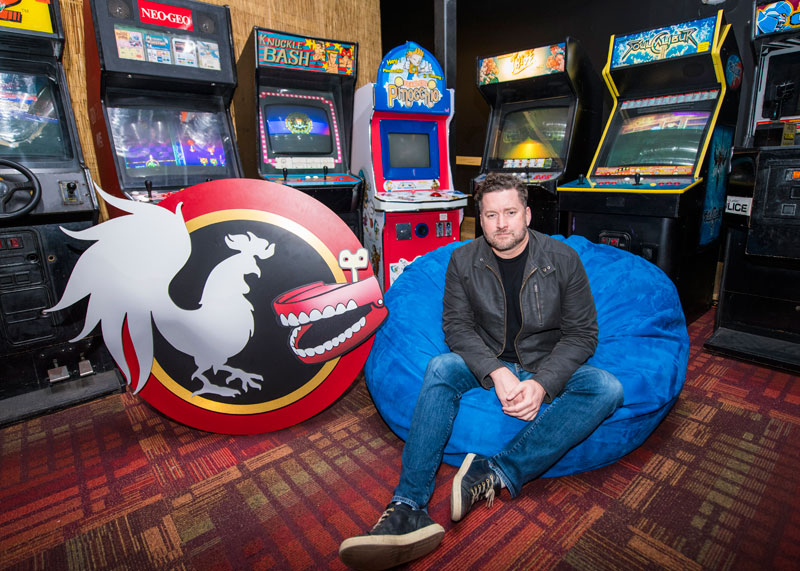 No Burnie Burns, no Rooster Teeth. That's how it always felt – that it was impossible to imagine the Austin studio that did so much to pioneer streaming video and modern online fandom without its co-founder, creative force, and public face. Yet last June, Burns left the company to which he was so pivotal and synonymous, as it enters a new era. He exited with a simple tweet, a short message, and moved with his wife and kids into his own next chapter.