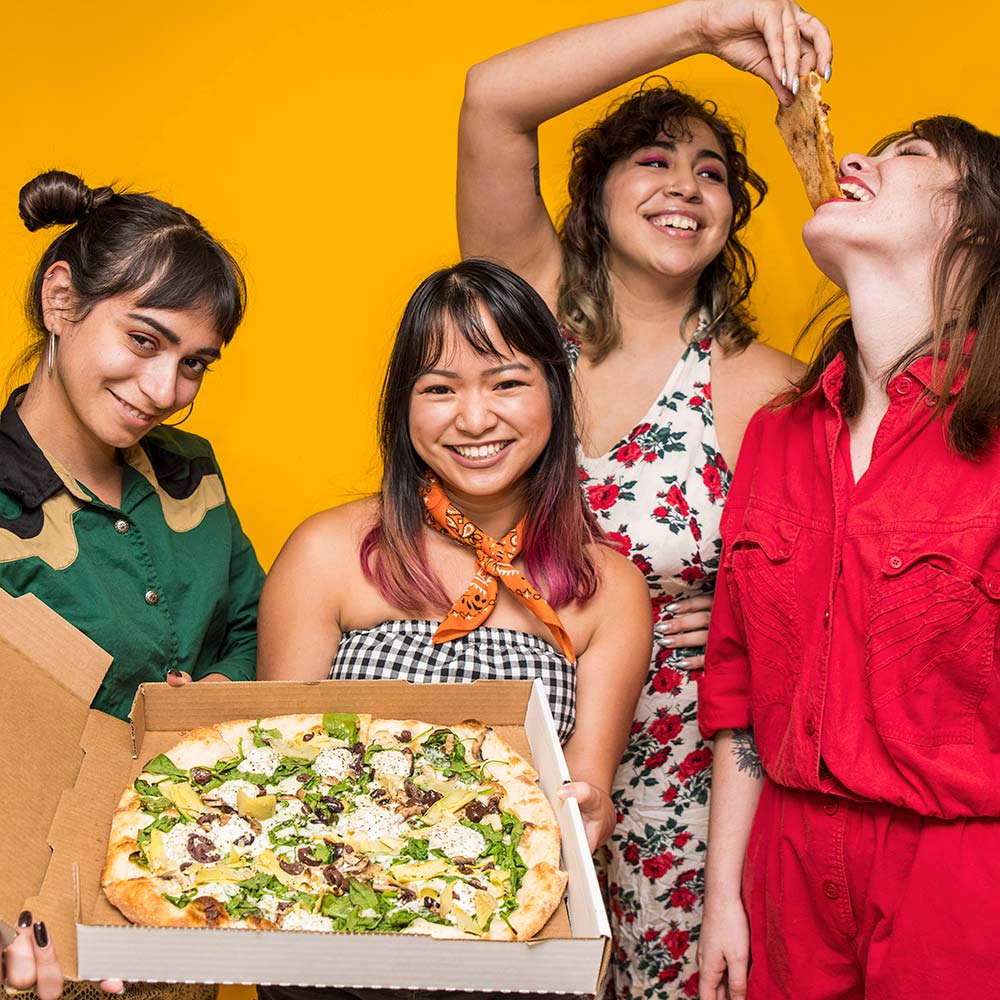 Since their start in January, Howdy Gals have emerged as an essential booking presence at local haunts like Hole in the Wall, Spider House, and Hotel Vegas. The combined party-planning forces of young guns Belicia Luevano, Kelly Ngo, Maya Van Os, and Shannon Wiedemeyer run the gamut of rock, punk, pop, and anything else the twentysomethings are coming up with these days. Whether you’re a townie in need of an EP release show or a college newbie who just made a Bandcamp, they’ve got a slot and social media push just for you.

That’s no priest behind the grille in the Song Confessional. It’s alt-pop songster Walker Lukens, ready to listen to your deepest, darkest confession and turn it into a track. Lukens and his Side Arms bandmate Zac Catanzaro created the traveling pop-up recording studio, in which participants enter the back booth of a retro camper, tell a personal story, then Lukens and a rotating cast of talented Austin musicians record a song about it on the spot. It may not save your soul, but it’s among the most personal musical experiences out there to discover. 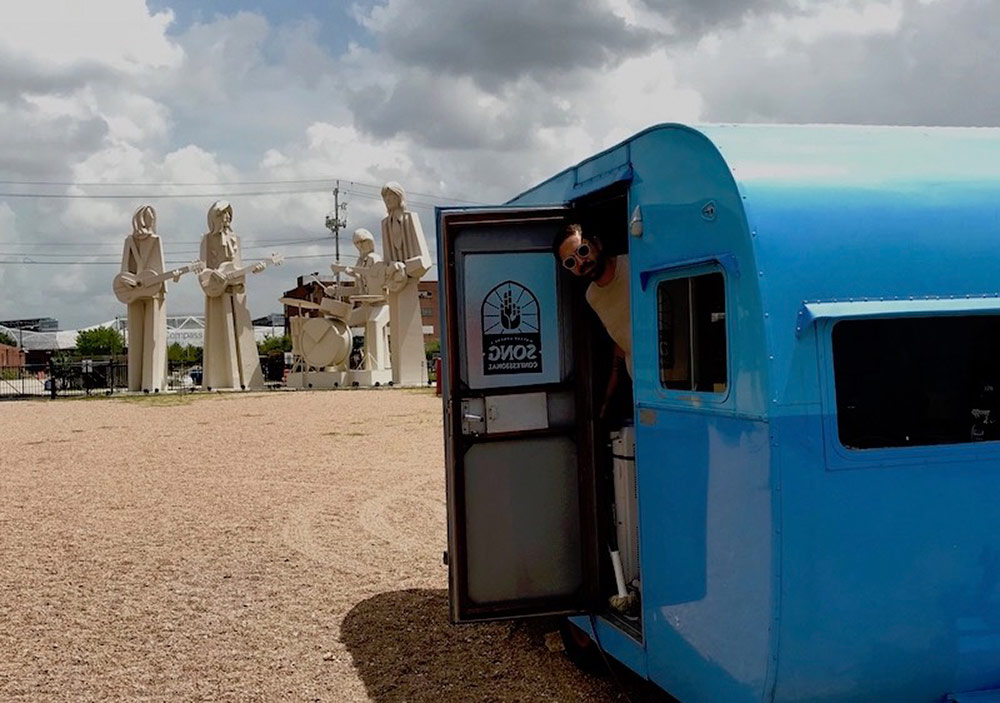 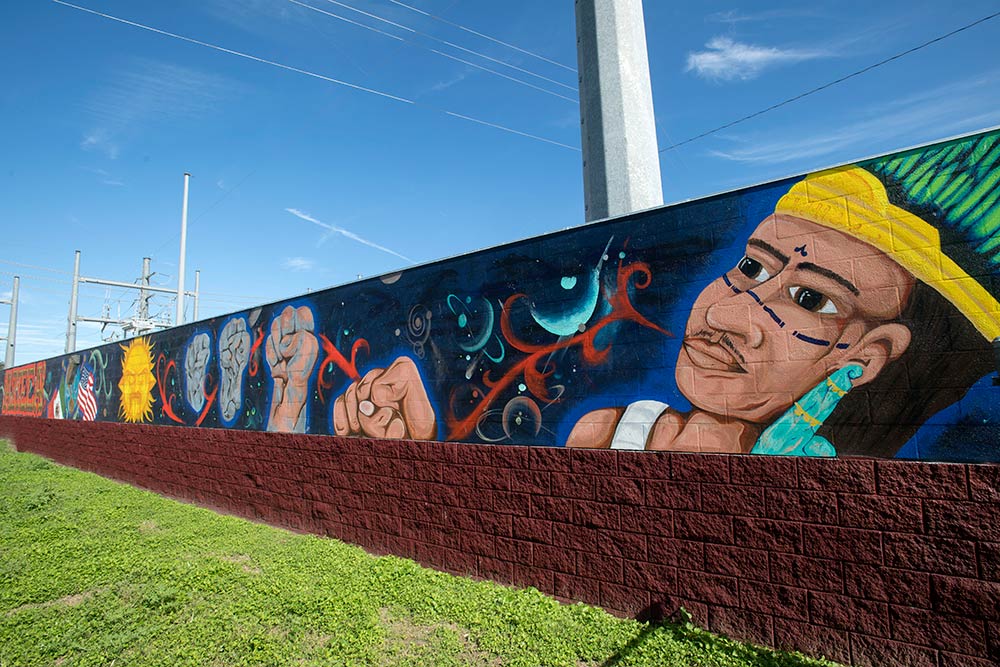 Anytime an Austin mural is rescued from disrepair, it's cause for celebration, but the restoration of For La Raza by community group Arte Texas deserves a citywide cheer. It's revived an important community landmark – a vibrant statement of Chicano pride painted in 1992 by Robert Herrera and Oscar Cortez – and also reinvented it, with heightened colors and new images painted by the original muralists in collaboration with a new generation of Eastside artists. As restored, the mural simultaneously pays tribute to Holly Shores' past and again makes a bold statement about the community's present and future.

Before SAGE Studio opened in January 2017, Austin lacked headquarters for outsider artists – those creating outside the realm/traditional training of contemporary art – with intellectual and developmental disabilities. Co-owners Katie Stahl and Lucy Gross pursue that goal daily by featuring and selling their Texas-based artists’ pieces in an 8- by 10-foot shipping container-turned-Eastside gallery, which doubles as a workspace. The crux of SAGE’s philosophy according to Stahl: “Not everyone who has a disability is a talented artist, and not everyone who does not have a disability is a talented artist – artists are artists.” Couldn't have said it better ourselves. 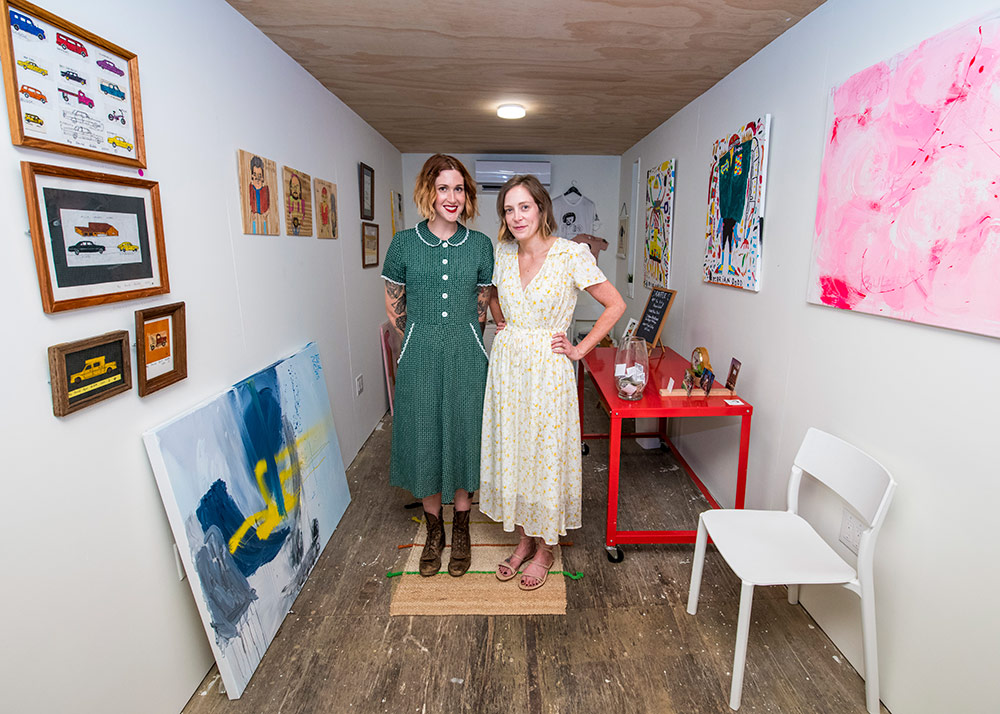 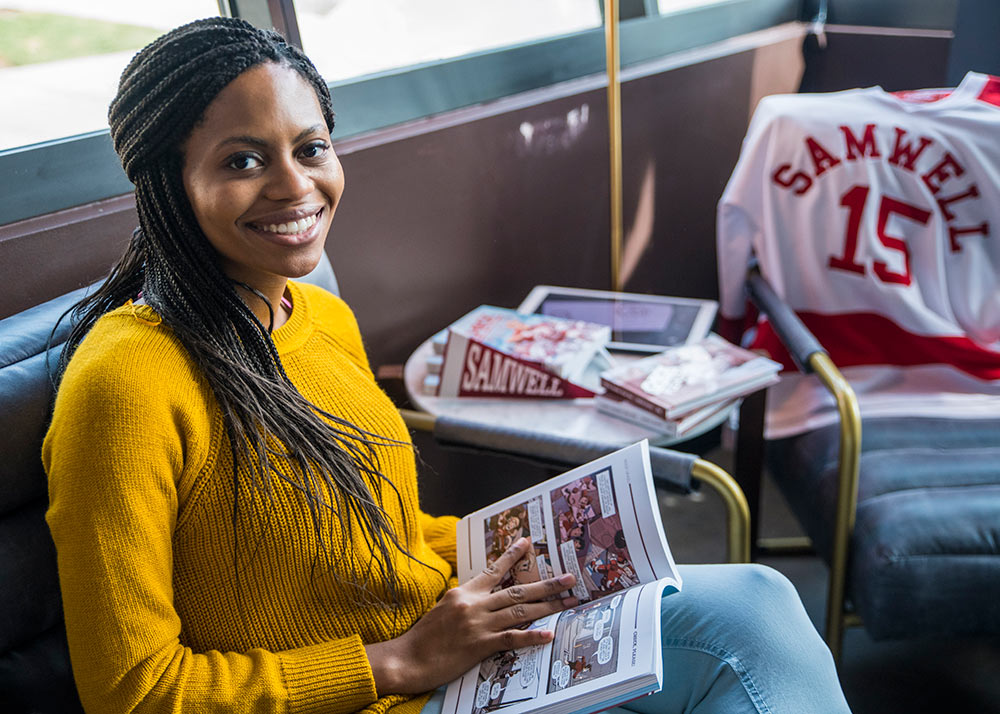 The locally based graphic novelist's Check, Please!, about the ice hockey team of fictional (and Canadian) Samwell University, is the best-funded webcomic of all time. The series – and its popular iteration in printed form – is also among the funniest and sweetest evocations of any sport ever put into sequential-art form. It'll warm your heart and make you laugh and wonder why you don't strap on a pair of skates yourself, if only to glide over for a slice of that newbie Bittle's pie.

This is not your run-of-the-mill Pride. ABP, now officially a nonprofit, kicked off in 2016 to better represent, celebrate, and empower Austin’s blaqueers. And, as they continue to grow, that’s exactly what they continue to do. From their signature Austin Black Pride Weekend to their near-monthly events, ABP doesn’t just throw a damn good party (though they definitely do); they also host art shows, brunches, book groups, and panel discussions on living at the intersection of black and queer to better showcase and support Austin’s thriving black LGBTQ community. 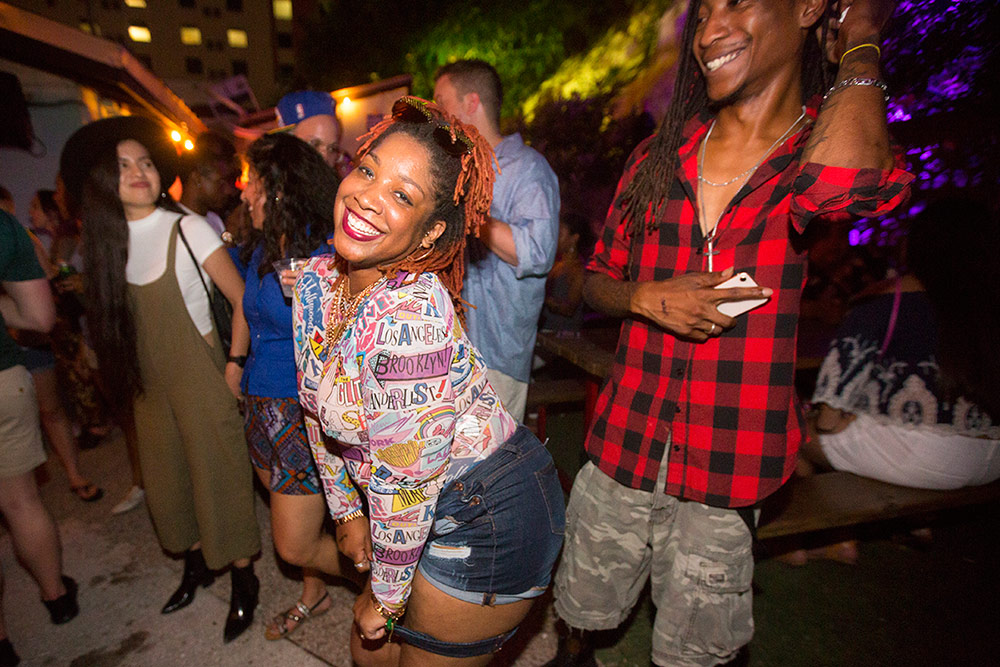 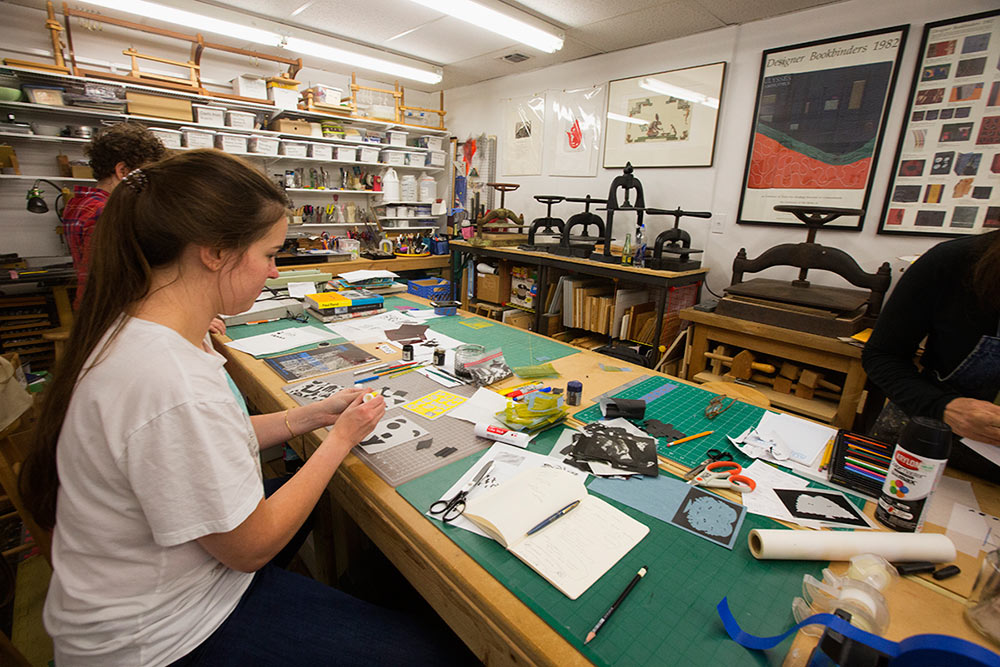 This is the place for bibliophiles who want to get their hands dirty. At ABAC, you can learn how to build a book from scratch using paper, thread, and a little bit of glue, taught in six-week-long or weekend workshops for a fair price (materials included). Become a member and you can book studio time once you get good enough to spearhead your own projects. They've got all the equipment you need, including a paper guillotine. Bookmaking has never been so badass!

Creating and maintaining a gallery is a lot of work. Creating and maintaining a home is a lot of work. For whatever reason, artists Eric Manche and Sara Vanderbeek decided to exponentialize their hard work and open an art gallery in the garage and backyard of their home. Well, alright, we know the reason. Arts venues in Austin are struggling in the face of higher costs and insufficient funding, but that’s all the more reason to support this awesome DIY space and their exciting shows. Since their launch earlier this year, DORF's consistently innovative programming of talented artists has kept us coming back and staying tuned for more. 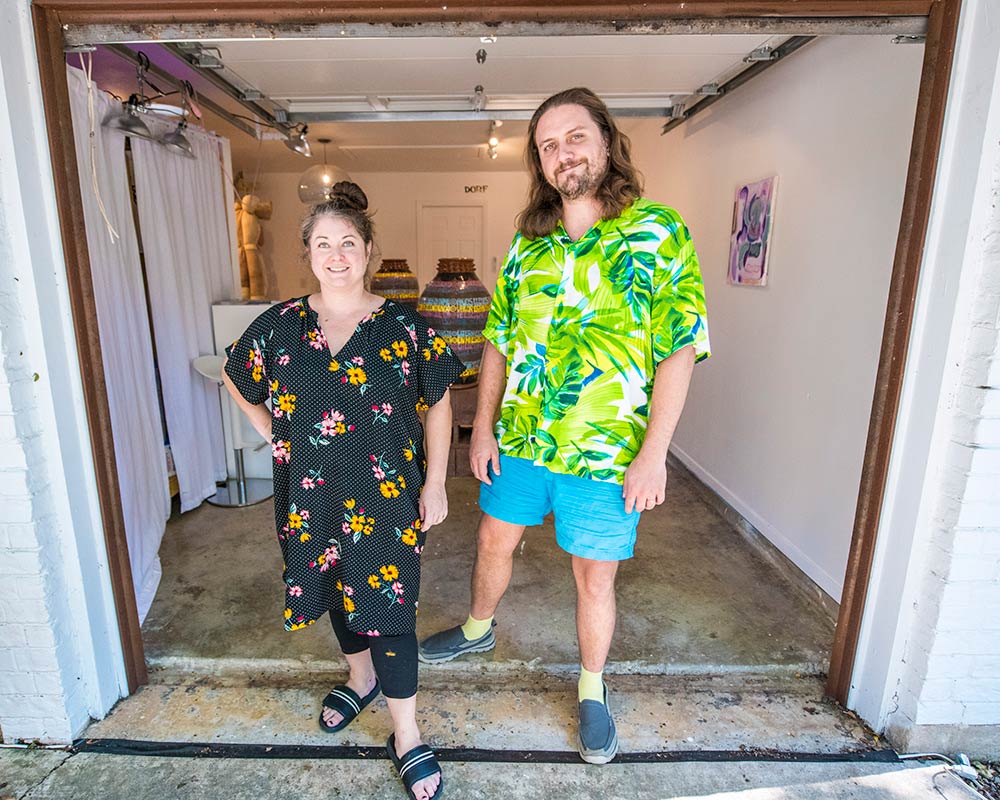 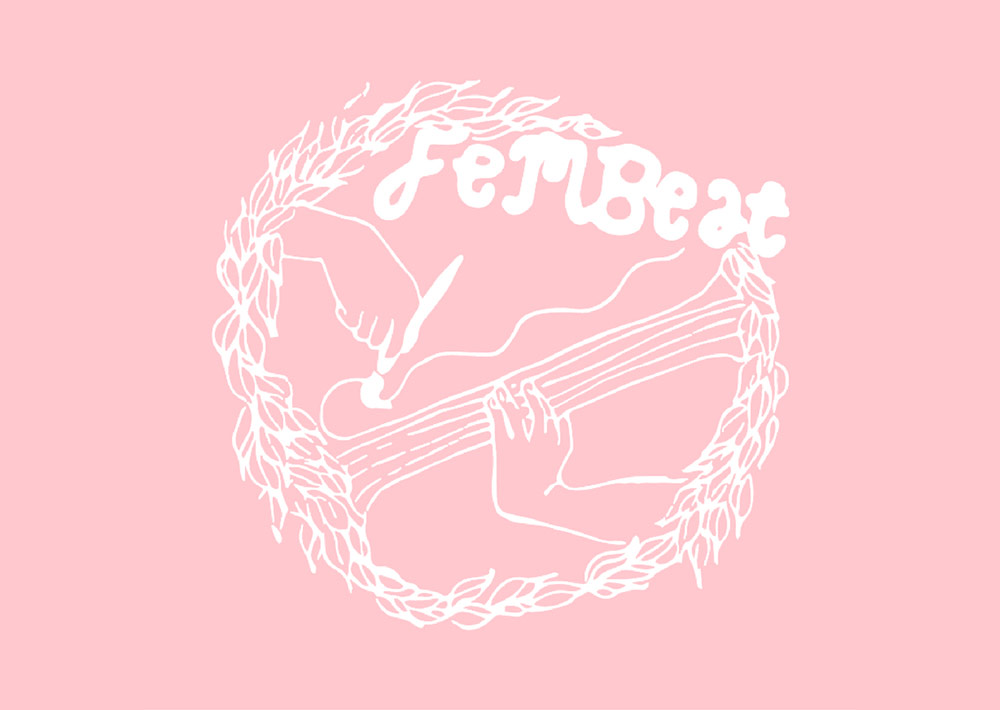 Austin doesn’t lack for festivals. In fact, it doesn’t even lack for festivals that nudge the status quo. But this year’s inaugural Contrast Film Festival decided to turn the average film fest upside down, inside out, and through a loop. Jeremy von Stilb and Tish Sparks created Contrast not for cinephiles but for the movie-curious, with the hope of nurturing would-be film lovers. They screened new films and cult classics, they showcased the most radical queer- and women-created cinema out there, and they threw some outlandish and awesome afterparties to boot. What’s more, they did it on the cheap, making badges jaw-droppingly affordable. We can’t wait to see what they do for round two. 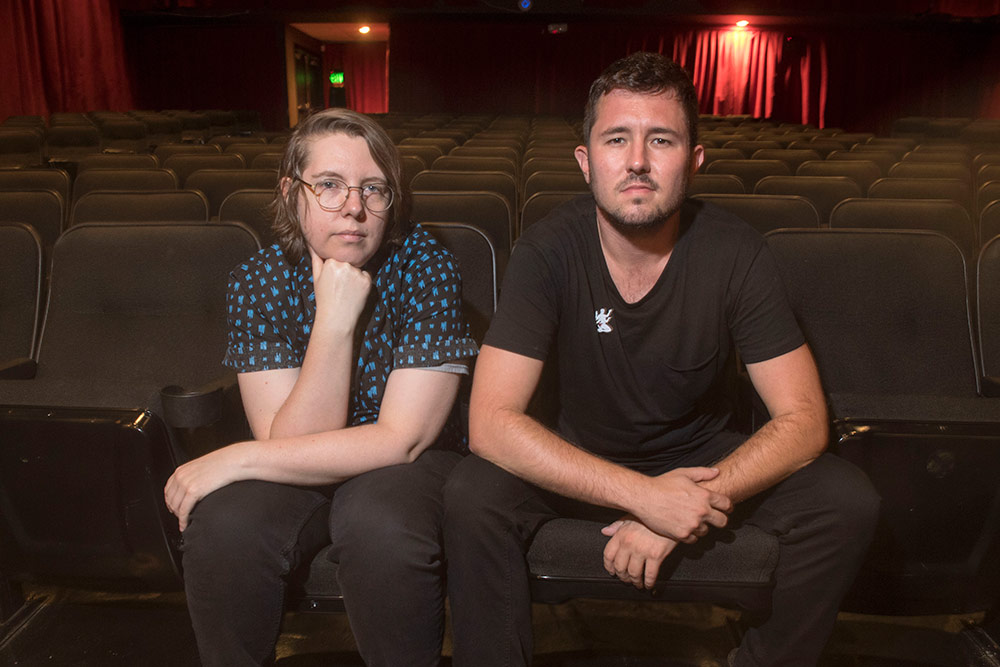 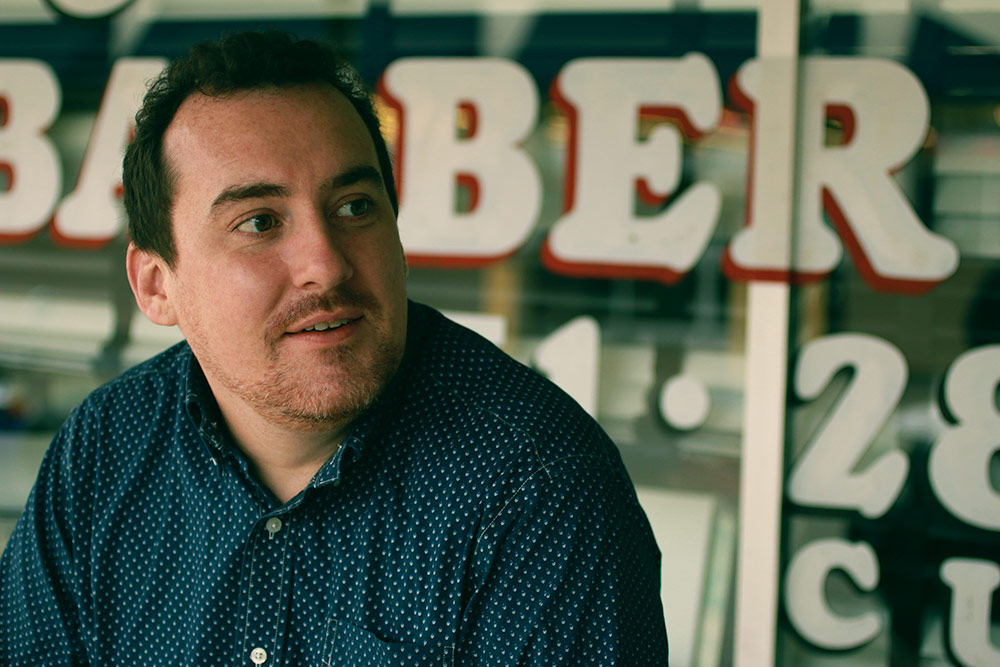 Films and TV projects don't happen without a little help, and more often than not that help comes from Austin Film Commission Director Brian Gannon. Whether it's helping lure major productions like Fear the Walking Dead by showing them Austin's amazing technicians and locations, or helping local creatives get their projects off the ground and in front of an audience, Gannon is truly the guy behind the people behind the camera.

Austin’s blues history didn’t start in the Seventies at Antone’s. It began in the juke joints and bars populated by African-American performers on the Eastside. Dialtone Records owner Eddie Stout reminds Austin of that annually with his Eastside Kings Festival, a 12th Street club crawl stocked with the best of Texas blues. The late summer fest has continually showcased a treasure trove of brilliant veterans like Miss Lavelle White, Bill Campbell, Blues Boy Willie, Jewel Brown, Classie Ballou, and the recently departed Hosea Hargrove, plus emerging talent like Jai Malano and Tomar & the FCs. 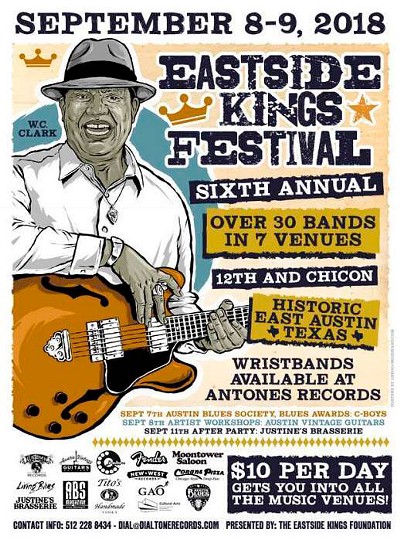 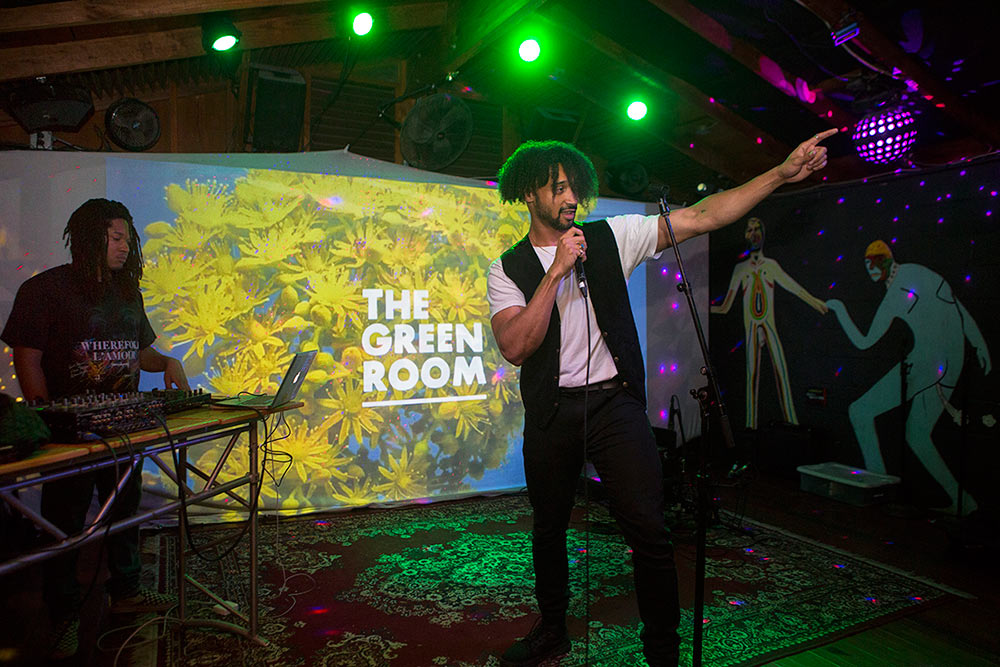 As a self-described “creative brand,” Brown State of Mind dabbles thoughtfully in a bit of everything, all around aiming to lift up people of color involved in the arts. This manifests in curated community events, educational meetups dubbed “Brown State University,” and a lovely web presence highlighting the work and poetry submissions of artists around Texas. Notably, their recurring Green Room concert series rounds up fresh finds in rap, R&B, and electronic from around the U.S. Now over a year old, the creative clearinghouse emphasizes voices often skipped over in the city of Austin.

In dat Black Mermaid Man Lady at allgo, the audience had to be led from one space to another. Wisely, that task was left to Florinda Bryant. She delivered Sharon Bridgforth's text with such spellbinding musicality, we'd have followed her anywhere. That's how it is with this multidisciplinary dynamo. She has power – as an actor, a singer, a poet, a director, a teacher, an activist – and she uses it to lead us places we need to go: places of justice, equality, love. Case in point: her solo show Until the Flood, set following Michael Brown's shooting in Ferguson. 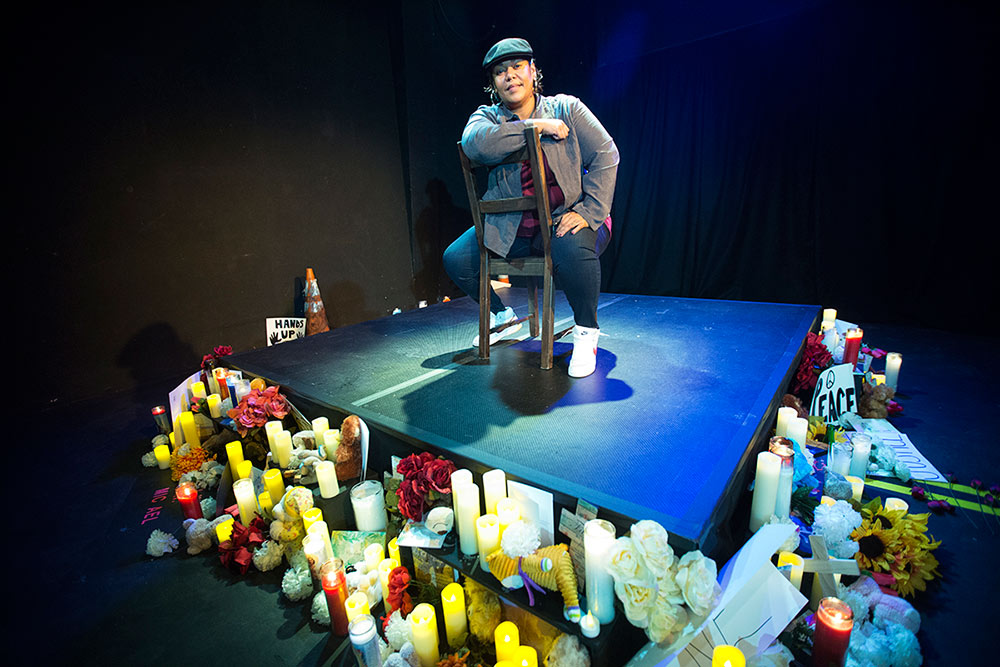 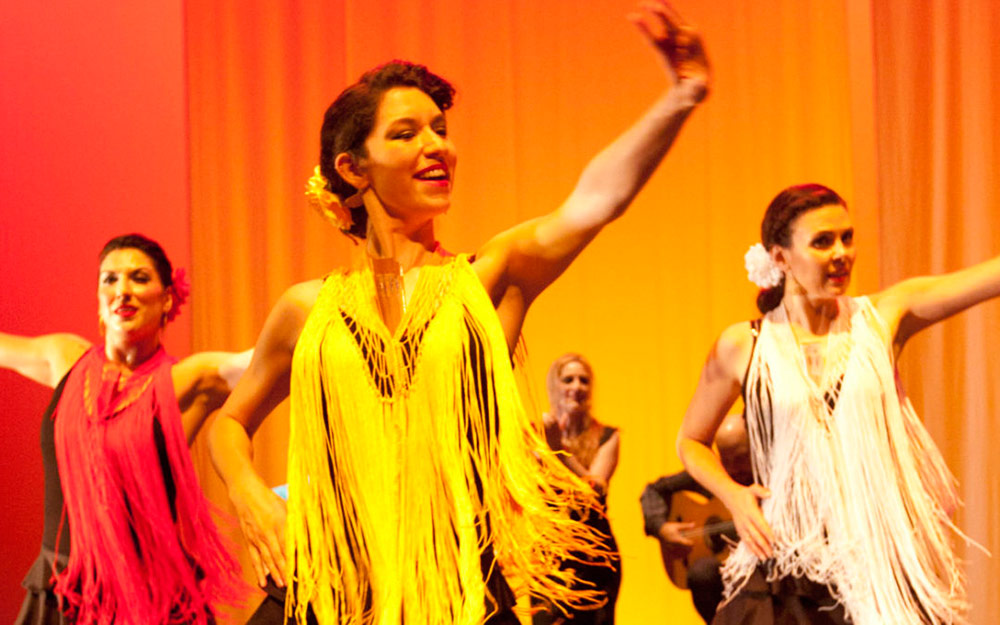 Hammering one's heels on the floor may not be considered decorous behavior in some quarters, but when it's the members of A'lante Flamenco bringing those feet down, it's not only proper, it's art. This ensemble of five dancers and six musicians brings all the requisite passion and skill to this traditional dance form, but Artistic Director/Choreographer Olivia Chacón and Music Director Isaí Chacón also make their flamenco relevant, addressing issues such as immigration, gentrification, and women's rights, and incorporating tech like a virtual dance jam via Facebook. A'lante knows how to keep the beat and get our heartbeats racing.

What Tim O'Brien did with Vietnam, his fellow Austinite Brian Van Reet does with Iraq in his debut novel Spoils. Van Reet makes the abstract come alive. The gritty, poetic tale of a female soldier kidnapped by Baghdad jihadists is the first Texas winner of Austin Community College's national Balcones Fiction Prize and also earned the Writers' League of Texas Book Award. A UT Michener grad, Van Reet won a Bronze Star for valor in Baghdad, and his reality brings truth to his fiction. 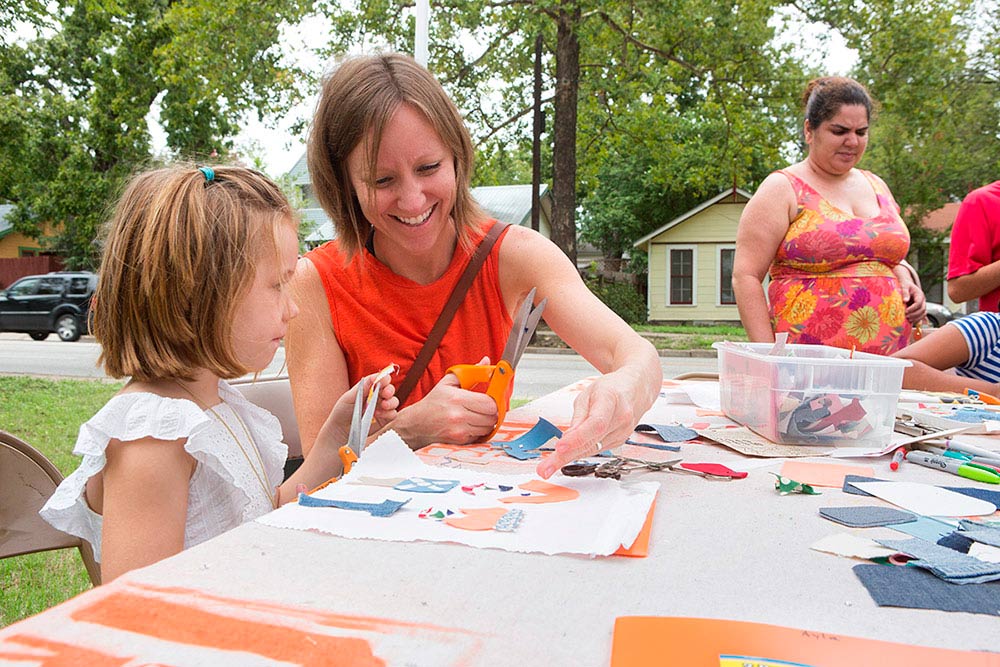 Offering instructional workshops on everything from figure drawing and woodworking to paper marbling and tarot reading, Hive Arts Collective crafts a comfy space for women and nonbinary artists of all levels. Led by visiting local experts, the classes typically convene at multi-use mecca the Museum of Human Achievement, alongside frequent artsy collabs around town. Plan ahead – the intimate, materials-included events often sell out.