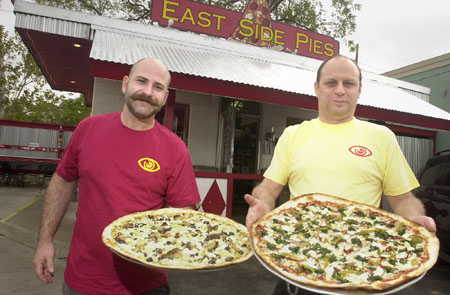 “You argue with a fool, you’re the fool yourself,” East Side Pies co-owner Noah Polk told the Statesman in late 2016, after online trolls attempted to drag the local pizza chain into the manufactured “pizzagate” conspiracy, maliciously hallucinating an international pedophile ring connected to the Hillary Clinton campaign. The nutjobs provoked threats, spurious “exposé” videos, and even vandalism – but Polk and partner Michael Freid responded by becoming East Side philanthropists, joining with the city in an anti-bullying campaign established by youth arts nonprofit Creative Action. The owners say they were gratified by the public support, and they continue to help the community – and to make great, creative pizza pies.