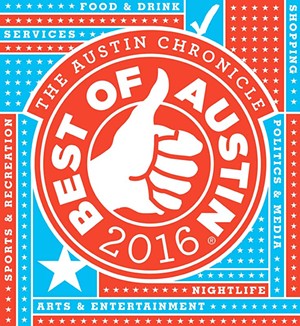 The Personal Is Political

There’s a certain anxiety in deciding what is “best” in 2016. Almost everything that happened this year – David Bowie and Prince dying, Brexit, the ascension of the alt-right and a certain orange-hued nominee – could more accurately be described as the worst. With so much bad, how do you suss out the good in the year?

It turns out doing so is a bit of a political statement. If Trump represents a national id eager to restrict the definition of what America is, this year’s “Best of Austin” (in its small way) represents the opposite. Both the critics and the readers polls value an expansive vision of the world, one that celebrates diversity, kindness, community, and heart. It values the wealth of viewpoints that come from a city that deeply cares where it is going and where it has been. And above all, it values an Austin that knows that opening doors is what makes life worth living, not building walls.

I’m writing this not knowing who will win the election (the BOA supplement went to press on Tuesday before the election was called), and as scared as I am of the outcome, I do take heart in one thing – that my town, our town, messy and chaotic and contentious though it may sometimes be, still is worth our vote of confidence.

For most of the existence of this issue, Kate X. Messer was the driving force. Her editorial voice defined more than two decades of our changing city with an irreplaceable point of view that combined a deep love for her community with a deep understanding of all of its intricacies. Over the course of her career at this paper, she has been a mentor and sounding board for more writers than I can mention in this cramped space, but that number includes both the assistant editors of this issue and myself. I can only hope that my impact on this institution has a quarter of the impact of hers. Retired from the Chronicle or not, she will always be the best of Austin.