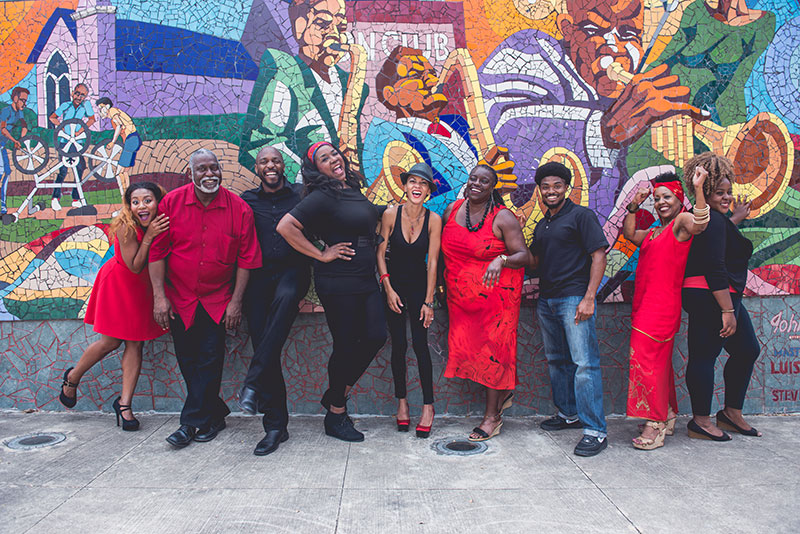 There's little we Austinites like more than congratulating ourselves on our tolerant and liberal city, but a discomforting contradiction to this free-wheeling reputation is the marginalized and proportionately small African-American population that is dwindling just as the city's overall population expands at a brisk rate. The stellar artists at the helm of the newly formed Spectrum Theatre Company have taken a theatrical approach to help reverse this trend and are "on a mission to provide the Austin area with professionally rendered productions representative of the many shades and nuances of the African-American experience." Super luminaries Billy Harden, Carla Nickerson, Jacqui Cross, and Janis Stinson have enriched all of Austin with their performances for years; their new company may just be the artistic tonic to enhance Austin for African-Americans and to bring us all closer to the city we fancy ourselves to be.

Perhaps you’ve seen him but never knew his name? Andrew Hilbert has been touring the Austin circuit since moving from California to Texas in 2011. Whether it is emceeing events shirtless for Foxing Quarterly, doing reoccurring stints at Owen Egerton’s One Page Salon, or clearing rooms at the Whip In with the extremely detailed scab-sorting scene in Flesh House, Hilbert commands an audience’s attention and laughter in a medium where most people would rather rip their own limbs from their bodies than hear another bookworm read aloud. The release of his newest novella, Death Thing, will ensure many more to come.

After discovering that women often avoid collaborating with each other, Jane Claire, Ashlee Jordan, and Leslie Lozano founded #BossBabesATX to give local creative women a space to learn, connect, and empower each other. Despite only having a handful of meets and workshops so far, the events are selling out fast, proving that the need for a paradigm shift is fierce. Their events will leave you feeling inspired, moved, and equipped to go out and create. They aim to “turn Austin into the kind of city a woman can call home – a-take-off-her-bra-let-down-her-hair-brew-some-coffee-invite-the-crew-spin-some-vinyl-and-throw-herself-into-work kind of home.” Yes, bisssh!

Music in a traditional auditorium is well and good, but if we've learned one thing from Steve Parker, it's that all the world's a concert hall. This local composer, trombonist, and all-around music-making maverick has placed a dozen trombone players on the Lake Austin shoreline, invited the public to play recycled instruments in the City Hall parking garage, and, in his Soundspace series at the Blanton Museum of Art, marched 100 tubas through the atrium and stuffed soloists in elevators. He'll make music anywhere and with virtually anything, as he proved with Traffic Jam, his recent concert of new music by local composers performed on the asphalt of Blue Starlite Drive-In, with instruments ranging from pedicabs to wheels to car horns by the dozens. His boldness and fervor inspire us and carloads of other music lovers to go off-roading with him at every opportunity. Honk if you love Steve Parker!

Let's lay this out plain and simple: These are thankless jobs. Nobody will ever admit to being happy about Pride. The current crew in charge (2011-present) of Austin's annual fest and parade sure take a lot of guff. One school of thought complains that Prides by their nature are not proud, instead kowtowing to corporate overlords. Another says that they are way too permissive in allowing the representation of skin and kink. Or that they didn't order the correct weather for the comfort of attendees. Or that they charge admission. Or that they give to causes. Or, gee whiz, what about the lesbians? Or that they've booked some of the most innovative programming in the history of Austin Prides. Or that they work long, miserable hours for no pay, much to the detriment of their own personal lives, relationships, and bottom lines. Or that for some reason, this wacky festival that everyone seems to have an opinion about (but precious few with these opinions will volunteer to work) has never had one year where they haven't completely diversified and expanded the variety of event offerings, not to mention totally obliterated the previous years' attendance records (over 200,000 at this year's parade alone, according to public safety estimates). Yeah, we can see what the problem is….

East Austin is home to so many homegrown musical legends; there’s definitely something in the water in the '02. Dressed in his classic caballero boots and hat, Luis travels the streets en route to the neighborhood restaurants and bars, with his squeezebox busting out traditional canciones. His music carries through the pecan trees, and for a magical moment, it’s as if the timeless roots of the neighborhood are back in bloom.

Seen most frequently strolling the neighborhood between the areas of Cesar Chavez & Robert T. Martinez and Seventh & Pleasant Valley At the corner of 24th & Speedway, steel cables hoist a messy (but deliberate) arrangement of 70 aluminum canoes and small boats above the heads of UT campus visitors. This new addition to the university's Landmarks installation series was designed by sculptor Nancy Rubins – internationally renowned for utilizing awe-inspiring excess and improbable delicacy to reveal the beauty of form in everyday heavy junk. Just don't lean on it.

Chances are you've never heard the name, but this pioneer of the Austin punk rock scene has been making amazing art, completely off the grid, for at least 20 years. After a serious illness left him unable to work, his fascination with toys, alongside uncanny carpentry skills and boundless imagination, led him to a new "career" path. Terry Tunes makes monumental sculptures from discarded plastic toys, some of which have been on display at the Georgetown Public Library. He also makes dioramas based on the life and music of Roky Erickson, all completely not for profit – a policy he should seriously reconsider. Whatever LOLA wants, LOLA gets. So it seems for the scrappy little classical-music company known as Local Opera, Local Artists. Founded by mezzo-soprano Liz Cass and director Rebecca Herman to mount the world's first version of La Bohème cast entirely with women, LOLA not only produced that show to sold-out houses and great praise (and a trio of Critics Table Awards), but also staged a three-character cabaret take on Carmen, scheduled a revival of La Femme Bohème for Valentine's Day 2016, and commissioned a new opera from Austin composer Peter Stopschinski and playwright Kirk Lynn for fall 2017. We love how LOLA stages opera in a bar (the North Door), used proceeds from its crowdfunding campaigns to support Safe Place and the Veteran's Guitar Project, and turned its first birthday party into a celebration of all local opera. LOLA truly lives by its motto: "We all sing better together."

Pat Littledog and now ex-husband Chuck Taylor grew Paperbacks Plus into literary central for Eighties Austin. Then known as Pat Ellis Taylor, Littledog made waves when Atlantic Monthly Press published her semi-autobiographical and slyly feminist novel-in-stories Afoot in a Field of Men. It follows a thirtysomething hippie named Pat in an era when hippies were feeling the sting of time and responsibility. Taylor's Slough Press just re-released the book and revealed again what a wise, funny, and refreshing writer Littledog is. For the uninitiated, street photography is, well, photos taken on the street – of life, of people, of raw emotion. Street photographers are artists capturing moments in time, but they're often disguised as mild-mannered, middle-aged guys with cameras, like Jeff Vaillancourt. A California transplant, Vaillancourt doesn't make his living as a photog, but he enriches his life by haunting Sixth Street and capturing its poetry and grit – the lovers embracing in the rain, the drunk ejected from a bar and prone in the gutter, musicians plying their trade. Vaillancourt sees it through his lens and gladly shares it with us all.

We stumbled upon Lumiere’s Tintype Photography’s mobile booth during EAST and instantly fell in love. The 150-year-old photo process is a perfect marriage of science and art (and makes for a super rad Instagram: @lumiere_tintype). Owner and operator Adrian Whipp makes beautiful and haunting images from a small mobile booth that normally sits at Justine’s Brasserie, but can be moved to other locations. Tintype reacts to colors differently than your standard black & white photos, so blues appear almost white while reds can come through as black. Bring in your friends, family, or pets for a photo session, or sit for a solo portrait and leave with a beautiful, unique metal print. 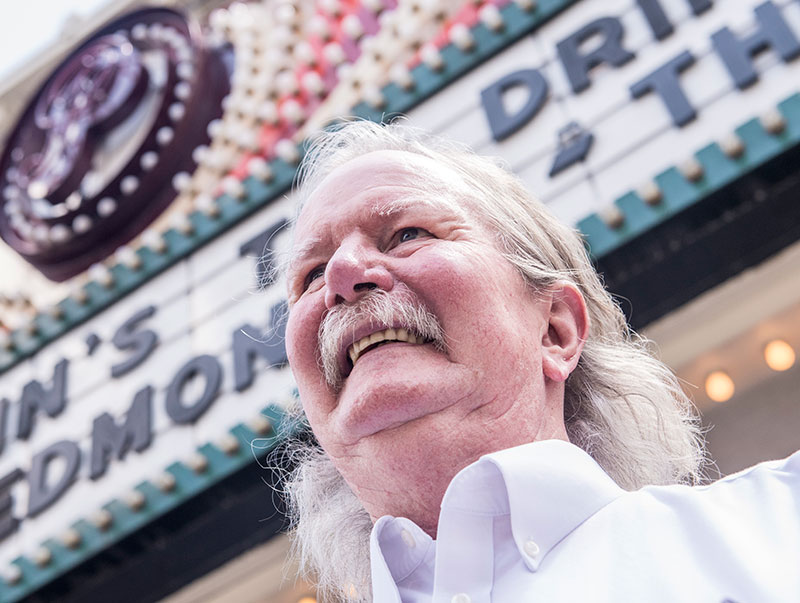 Need a permit to shoot near the Capitol? Want stats on Austin film production? Don't phone a hipster; call the tall guy. Since 1985, a soft-spoken, smart, and funny pro named Gary Bond has been Austin film's savior. In July he quietly retired as the head of the Austin Film Commission and has left some big shoes to fill. The former radio newsman exits with more knowledge of the Austin film scene than just about anybody. All that, and he's a genuine nice guy who loves to eat (and cook) pie. He'll be missed.

Best Zen Inducing Art Installation
The Color Inside: A Skyspace by James Turrell

Artist James Turrell uses light and space as both his tools and materials, and the University of Texas is lucky to host one of his few public installations – an outdoor dream pod called the Skyspace. Reserve a spot at sunset to witness an hour of gradual sky changes, moody color transitions, and the chance to let your brain go wandering. Whether you want to feel like you’re in outer space or choose to explore the deepest folds of your subconscious, the Skyspace will encourage the ultimate out-of-body experience right in the middle of campus.

Earlier this year, about 11,000 square feet of the first floor of exhibition space at the Bullock Texas State History Museum was closed for renovations. Renovations is an understatement. The Bullock is preparing for the permanent resting place of La Belle, the ill-fated ship belonging to French colonialist Robert de La Salle. Artifacts of the 300-year-old vessel were found in Matagorda Bay along the Texas coast in the Nineties, leading to the discovery and excavation of the entire shipwreck, one of the most significant archaeological finds in Texas history. And it's all at the Bullock! In 2016, the museum space will reopen with the reconstructed ship for all to see.