Since the dawn of the printed scroll, reading in the loo has been a sacred tradition, and the bathroom stalls at the Liberty take this self-indulgence to a whole new level. No matter your sobriety or squatting preference, this latrine graffiti will hit you harder than a shot of well whiskey. From saucy and sassy to political and brassy, these stalls offer a better collection of life lessons, good-time phone numbers, heartbreak, and gender performance than a self-help book on a Chicken Soup bender – okay, maybe it is the well whiskey …. No matter. Go and have yourself a sit and sift through the brain trust of this think tank. Though frequently repainted, drunken proverbs are always on tap here.

Boat down the waters of Lake Austin to catch a view of this gorgeous residential boathouse and waterfall. Designed by Bercy Chen Studio, the two-story cylindrical boathouse has a waterfall that recycles lake water cascading from the balcony on the second floor. A spiral staircase wraps around the house, accessible from the shore via a set of stepping stones. The first level includes a dock with space to cover a boat or small yacht. The second floor looks out onto the Canyonland Nature Preserve. It's so charming that it's enough to make you wish it was more than just a boathouse. 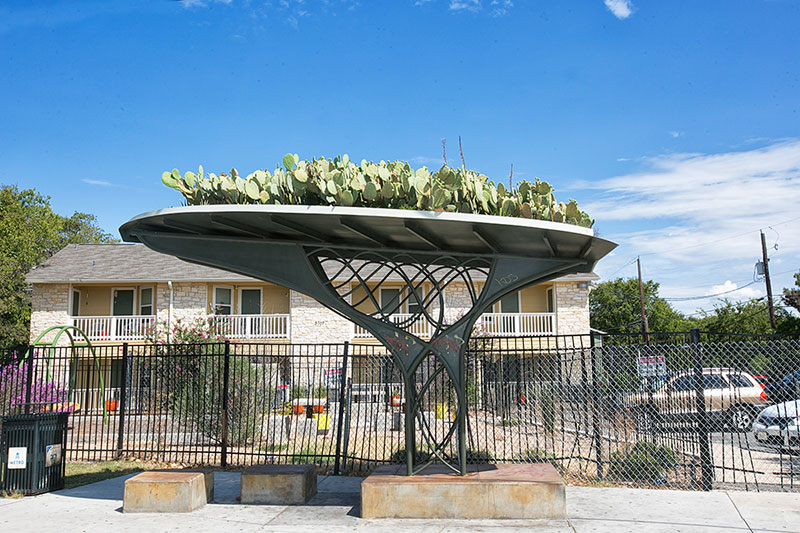 Let's face it: Bus stops are generally hard, sleek, modern, and utilitarian. They may reflect a certain industrial aesthetic, but they are hardly media for artistic expression. A project of Green Doors, Stanley Studio architects, and JQ + Tsen structural engineers, the stop at the northeastern corner of Manor at Rogge bears a beautiful exception, surrealistic with a Southwestern touch. Picture some madman taking the same basic design as many of the more recent Capital Metro stops, such as the one in front of the Central Library branch Downtown, putting Silly Putty on it as if it were a Sunday comic strip, doing the requisite bending/warping/reshaping … then planting a cactus garden on the roof. Subversive, yet functional – this is great.

Owned by Rainey Street bar maven Bridget Dunlap and designed by North Arrow Studio and Hendley Knowles Studio, Container Bar is one of the best examples of an eco bar in Austin. Driven by the movement of affordable and scalable reuse of shipping containers started by New York architect Adam Kalkin, they took seven shipping containers, stacked them at different heights, and spread them out to make a central courtyard. No easy task, it took the city of Austin four years to permit containers as a structure, but it was well worth the wait.

Sett Studio’s modern residences at 900 and 902 West Live Oak, off of South Congress, were constructed to prove that green design should be the standard. The eco homes were built to be LEED certified, with airtight structural insulated panels and Sett's own charred wood, Shou-Sugi-Ban, from sustainably sourced pinewood timbers that are weather-, rot-, and bug-resistant. Sett proves that energy-efficient can be hip modern design, with open floor plans and natural light pouring through the windows.

There are plenty of reasons to go to Donn's: The generous plates of smoky Texas ’cue with many sides to choose from and the most extensive breakfast menu you'll find at a barbecue joint. And we love the location on FM 969 for its friendly staff and long planks of communal seating. Our favorite feature, however, is a sweet little porch, where you can sup or wolf down that breakfast taco in the fresh air, away from the crowds. Don't expect some trendy, deliberately distressed lanai – it's just your basic screened-in patio hearkening back to a time when you had time to appreciate such simple things. Go with an open mind and the urge to hang out in abuela's backyard.

Painting, coloring, or creating murals on any wall; house battles with Nerf guns and samurai swords after Wednesday community dinners; and all of this can be done with or without clothes (except in the kitchen): These are the house rules at Rosewood Co-op. Founded in East Austin in 2011, Rosewood allows members to be their creative, diverse, and sustainable selves.

The building and business at 1191 Navasota offers two legacies of Central East Austin in one. From 1952 through 1966, it was the headquarters of Teachers State Association of Texas, organized in 1884 to see to it that black students got quality educations and black educators good working conditions in segregated times. It’s entered into the National Register of Historic Places as a “contemporary style” building, but it boasts some still-attractive Fifties-mod flair. It’s a style that befits its current occupant, House of Elegance, which was opened by Ella Mae Pease in the Sixties and has served as a full-service salon and de facto neighborhood center for going on six decades now. It’s a living monument, active and present at a personal scale that’s becoming more and more scarce in the neighborhood. Which, come to think of it, makes it a trifecta of modest monumentality. You'd probably be exiled from Austin if you didn't adore – like so many of us do – retro RVs, buses, and trailers. Seriously. Just turn in your hipster card now, detractors, and walk away. Local party people Vintage Innovations have a unique biz model that makes getting closer to your midcentury mobile-home-away-from-home easy – at least for a day or so at a time. VI specializes in finding these gems, buffing them up, and offering them as rentable party palaces. Throw a bash and have one of these renovated roadshows be the focal point. Highlights of their fleet include the on-the-road-again ex-tour-bus homes of John Denver and Willie Nelson, as well as a whopping 13,000-square-foot indoor event space of their own, colorfully decked out with gigantic works from local graffiti artists. So start making your Eventbrite list and gather up your party favors. You decide: You go to the party, or they bring the party to you.

The Ballards bought the property on Newning, four blocks from Congress Avenue, in 2000. Jimi was an executive for Oracle, Vivian a lawyer. They raised their kids while their mothers lived respectively in the carriage houses behind the main house. Last fall they had the brilliant idea to convert their home into an elegant bed & breakfast. The Fairview embodies the essence of historic mansion elegance on a hill. The beautiful gardens are becoming a favorite for weddings. The Fairview even offers dog-friendly rooms. 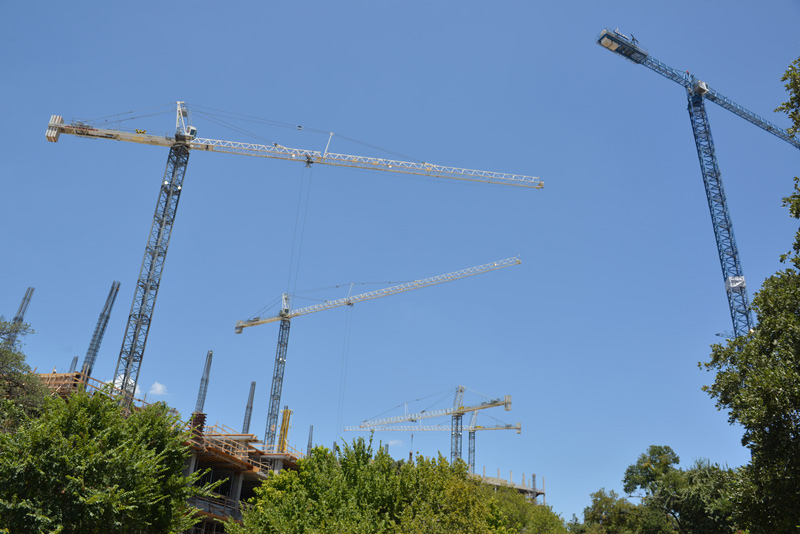 Even though the series finale of our favorite period drama aired in May, it doesn't mean we can't reminisce about the swingin' Sixties in our own backyard. Designer Mickie Spencer (East Side Show Room, Swan Dive, Hillside Farmacy) spared no details when creating the stunning midcentury mod Sawyer & Co. that resides in the renovated Arkie's Grill space. The future-retro diner features an atomic barkcloth-inspired mural hand-painted by Spencer, and restored bright turquoise Arkie's booths that sit atop a blanket of AstroTurf on the patio. If sipping on an Old Fashioned at the counter bar doesn't make you feel like you made partner at Sterling Cooper, we don't know what will. 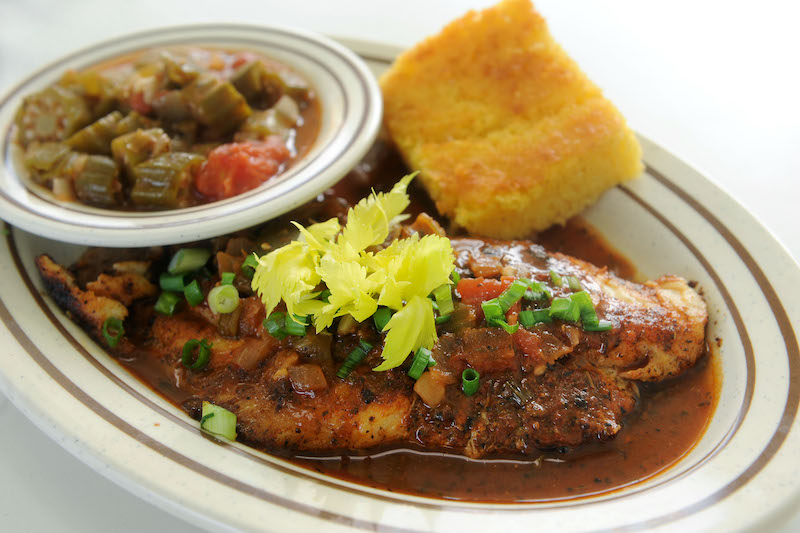 The ladies are ubiquitous, almost to the point of being taken for granted – but this town would be doomed forever if their lights grew dim. Only 17 of the original 31 built in the 1890s remain. We hate to start heartfelt kudos on such a negative note, but let's face it, Austin, we do have a way of losing the stuff we love best. Fortunately, Slater knew better. Yes, Slater, the lovable stoner from Dazed and Confused who climbed to the top of a moonlight tower to utter these prophetic words: "Imagine how many people out there right now are … just goin' at it." He knew what was important – that moonlight brings out the beast. So do the folks at the essential moon tower info site, Austin Moonlight. They maintain one of the best and most easily accessible resources out there to shine a light on these treasures.

We promise no jokes about big nuts or beaver-bashing (sorry, Buc-ee!), especially since this gargantuan bushy-tailed rodent is, bless her heart, a dainty lady. But road warriors who regularly pass her landmark spot on Highway 71 may have been shocked this past spring to see the ol' squirrel – originally made in 2011 by the nutty geniuses at Blue Genie Art Industries – missing from her pedestal. But hold on, the kind folks at her home turf Berdoll Pecans told us. She just went on a spa vacation to get a new paint job and came back to a bigger, better stump. 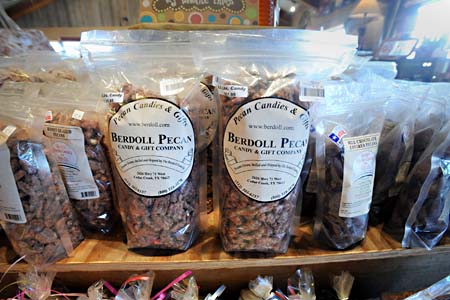 Best What's Next in Austin Architecture
The NexusHaus

A group of University of Texas architecture students together with Germany's Technische Universitaet Muenchen came up with a plan to address the ever-growing Austin population and affordability issues with the development of the NexusHaus. Crowdfunded at $21,422, the NexusHaus is a one-story, 850-square-foot integration of solar and energy-efficient technology. Built with renewable and reusable materials, the house features solar panels on the flat roof providing enough electricity for AC, lighting, and appliances, and to charge an electric car. After heading to the U.S. Department of Energy's Solar Decathlon in October, the NexusHaus will become an accessory dwelling unit in East Austin.

Jack Sanders was mentored by Samuel Mockbee at Auburn University's Rural Studio, which Sanders eventually ran. Sanders later co-produced Citizen Architect, a film about his mentor. Here are a few other accomplishments: He started Design Build Adventure in 2005, has taught architecture at UT, is representing District 9 in the city of Austin's Drawing Lines Project, and heads up the sandlot baseball team of architects, writers, chefs, and musicians, the Texas Playboys. His credits include the manifestation of Liz Lambert's El Cosmico, and projects with Robert Plant, Rick Linklater, Tito's Vodka, and New Orleans' Voodoo Music Experience. On top of all this, proceeds from his metal workshops go to HAAM. While he's known for his hat and smile, his love of collaboration and team brainstorming, and his "no panic" attitude, we'd like to recognize his do-good nature.