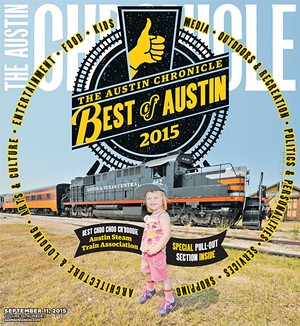 The track unfurls with the promise of destinations ahead. The whistle and horn blow with the resonance of times passed. You can't see this perspective from car or air. The history of railroads, freight and passenger, is the history of Texas. As spoken at the August 2015 dedication of the historical marker denoting the spot at Third & Congress where Austin's twin train depots once stood, "When the trains came to Austin, it was like the Internet and I-35 happened at the same time. You could tell in the historical records all the big changes that happened. New people and new ideas came to town." Indeed.

The Austin Steam Train Association's dedication to creating living history is evident in the real-life Austin & Texas Central Railroad, a fully operational rail system built from the rails up out of vintage cars and engines entirely operated by trained volunteers. This living history is not just a glimpse into the past, it's a living, breathing example of history's through line to the present, and a reminder of how important it is for all of us to play a part in making things like this happen.

As I stood at the dedication of that historical marker, I was struck by the lack of people under 40 at the event. Preservation movements are mostly populated by folks graying as fast as the topics they are trying to save. (The ironic sidebar to all this, of course, is that rail travel is also a potential mass transportation alternative for our future.)

Austin is doubling over on itself faster than a frat freshman doing one too many keg stands. We're losing as fast as we're gaining, and it's nearly impossible to keep up with documenting all of this, let alone trying to save any of it.

On that same morning a few weeks ago, one witness to the sign unveiling was Lidia Pérez, one of the Pérez sisters whose landmarks of industry – the late Las Manitas cafe and the current La Peña gallery and community hub – are located near that marker. She remembers when the train used to come through that very rail line and stop traffic on Congress. While I hate to objectify a sister, every time I see one of them, I think: MIGAS. Seeing Lidia triggered so many memories of great food and great times at the long-lost Las Manitas – a small cafe on Congress martyred to Austin progress (and the JW Marriott corporation).

As the crowd dispersed and I tried to find an affordable breakfast option (to also take advantage of the brutal $10 I had paid for the required minimum three-hour parking), I decided to follow Lidia back to La Peña and commiserate about the current state of Downtown. In my smart-ass way, I figured asking her where to get a decent breakfast taco would be appreciated for the sad footnote that it was.

Instead, I learned something new: La Peña sells breakfast tacos. $1.40 tacos! In their own way, the Pérez sisters are living by example, honoring what we love best about this town despite the changes that lead us to believe we are crazy for hanging on to the past. It's not about the past. It's about resonance. It's about humility. It's about recognizing the Austin we love and preserving her right to exist alongside massive thrusts of sometimes thoughtless progress.

I don't need to tell you "BOA" veterans – and here's a head's up to those of you new to our annual tradition: Located within these pages, you will find many a testament to this grit, gratitude, and unabashed joy. Enjoy.

Little Engines That Could: