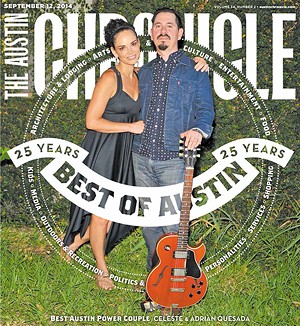 The sound of tittering and giggling rippled from behind the door of the conference room – the one with the nasty indoor/outdoor carpet that hadn't been touched since the building's Elgin-Butler bricks were laid, midcentury-something. I opened the door. Thousands of ballots were scattered all over the floor. Margaret and Nisa were spread out among them, sorting, annotating, counting. Nisa looked up and chirped, "Top secret!" Then she looked at Margaret. "Can she be trusted?"

"Yes," Margaret's voice drifted off. "Close the door!" Each and every category of each and every ballot had to be tabulated by hand. Margaret would pick up a ballot and read aloud votes she found preposterous in that good-natured sing-songy scoff of hers (which you never want to be on the wrong side of). Nisa would giggle along and keep the clipboard that held all the tabulation hashmarks safe.

Hashmarks. This was the time before hashtags, before online balloting and the Web-based databases to keep track of them. I'd barely been working in the office a week when I stumbled upon the poll-tallying industry of Margaret "Poll Answer Lady" Moser and the countess of count, Nisa Sharma. It was impossibly tedious, but they sure made it seem like they were having fun.

That was my first mistake. Fun. Let's call this my Tom Sawyer/Huck Finn moment.

It was my first year participating in "Best of Austin" – 1994. I wrote one Critics Pick at the last minute when some space became available. Anything for Mizz Margaret.

The next year, 1995, Jenn Scoville edited the annual issue and hornswoggled me into helping format and fact-check entries. Actually, I was into it. It was as fun as painting a fence. Jenn had taken the issue into next-level territory. It was huge for the time – an era of incredible growth for the paper. I got to award a number of Critics Picks that year – for places and people and things that are still some of my favorites to this day.

Sure, many "best" lists have come in this town since we started our annual awards 25 years ago, but many have gone. You, dear readers of The Austin Chronicle, make all the difference. I hope you revel in the same glee I feel when I'm counting your ballots, knowing that our readership includes some of the smartest, most open-minded, and inquisitive in town.

You make this issue what it is. Year after year we say it (and really mean it): For 51 other weeks you can hear us bitch and moan about all sorts of things – a meh restaurant, an agonizing album, diabolical development deals, a flimsy excuse for a film, a WTF City Council resolution, and traffic, traffic, traffic. But this week, this one week, it's about what you have to say: this heavenly skyscraper! An engaging author! A cute kid activist! What a town! What a town!

Your enthusiasm is infectious. We hope we've done you justice here. See, we don't just come up with all these Critics Picks to counter what you have to say (truly, our readers come up with some great stuff), but we just get so darned excited, we can't keep our mouths shut.

Speaking of which, got a minute to talk about that cover? Whew! What a handsome pair. Read all about 'em inside (Critics, Politics & Personalities, "Best Power Couple," Celeste & Adrian Quesada). While I'd been aware of "El Wizard" Adrian's sizzling work in so many of his Latin/funk/Laredo-rock brigades – Grupo, Brownout, Spanish Gold, etc. – I never put the pieces together that Celeste, the woman I knew as event planner/mise-en-scène maven extraordinaire – Texas Film Hall of Fame, Femmes for SIMS – was that Quesada.

Part of what instigated selecting the lovely duo as our cover stemmed from the sheer heft of accomplishments they've enjoyed between them in the last few years, but also because a working partnership, when it works, is something to behold.

Collaboration is key. And chemistry is everything. Chocolate and peanut butter. Crimson and clover. Salt-N-Pepa. Readers and Critics. Thanks for sticking with us all these 25 years. Now turn the page and see what we came up with – together.