The sight of 20 million bats emerging from a cave has been called one of the greatest spectacles in nature, and it is less than 50 miles south of Austin. The world's largest bat colony lives in Bracken Cave outside of New Braunfels. It is so large it appears on weather radar when the flying mammals go on their nightly forage for bugs. Join one of the five public tours in June, July, or August, or become a member of Bat Conservation International to double your opportunities to see the bats disappear into the night sky like columns of smoke.

Pigeons are called rats with wings, but few people take their presence personally. Even in large numbers it's not hard to see them as a pack of feral toddlers, tottering and innocent. On the other hand, one look in a grackle's cold eyes and it's clear they would happily peck your eyes out for that french fry. Walking around like miniature velociraptors, they overrun parking lots and outdoor eating areas. Who ya gonna call? Steve Oleson will bring his birds of prey under the cover of night and give those grackles the scare of their lives, strongly encouraging a change of roosting locale. Thanks to Oleson's hawks and falcon you can park without fear of a poop paint job or eat without those black winged thieves snagging your nachos.

As evidenced by our annual winter tournament and nightly rallies on the home court, the Chronicle takes its volleyball seriously. So we took extra stock in the successes scored this season by UT’s volleyball team, a squad that went 29-4 last year and won the NCAA championship in December – the team’s second since the formation of the NCAA. With two-time All-American outside hitter Bailey Webster poised for one more year, the team’s future’s just as bright.

Sure, you'll find a bevy of makeup-clad sororitybots on treadmills and bro-tank-wearing meatheads pumping iron, but the Texas State University Student Recreation Center's variety of workout equipment and group classes are steps ahead of San Marcos-area gym competition. Facilities include a boxing room and racquetball/handball/wallyball courts. (There are just so many ways to hit things legally here.) For the pacifists, the center also has a rock climbing wall, two pools, and a golf simulator. Longhorns, Rams, Aggies, Hilltoppers, and Roadrunners need not fret: Hook up with a Bobcat to be eligible for a guest day pass into the center.

Riding a motorbike through a flaming hoop, climbing up a 20,000 foot cliff face and jumping out of a plane isn’t for everyone. But iFly Austin offers an awesome alternative for your inner daredevil impulses. Once you suit up in an aerodynamic jumpsuit, expert skydiving instructors take you into an enclosed wind tunnel where 150 mph winds lift you into the air. Make sure to keep a smile on your face; your flight is captured on camera so you can relive all the soaring, freewheeling, and flailing for eternity.

Walk with care up the rocky stairs and gaze upon this amazing view of the Colorado River and the Golden Gate-esque bridge which crosses it. This romantic little hideaway is perfect for stargazing, snuggling, and just hanging around. Revel in the majesty of the galaxies, plains, and waters atop this lovely rock.

Bellinis, nachos, and calamari are yesterday’s news when it comes to a girls’ night out. Got that urge to be the baddest chick crew in town? The fine people at Red’s understand that sometimes nothing helps blow off that 9-to-5 steam like some good ol’ target practice. Gun rentals are free all day Monday for the ladies (you still must purchase ammo), and the hourly rate to use the shooting range is discounted, so seize the opportunity to channel your inner Pam Grier.

There's nothing like leaping from a tiny platform to really get your adrenaline going, but you're in good hands with the folks at Trapeze Austin. Professional circus performers who moonlight as thoughtful teachers will have you turning flopping into flipping in no time, and always with smiles on their faces. So do yourself a favor, and start flying – just let us know if you figure out how to get the R. Kelly song out of your head afterward. 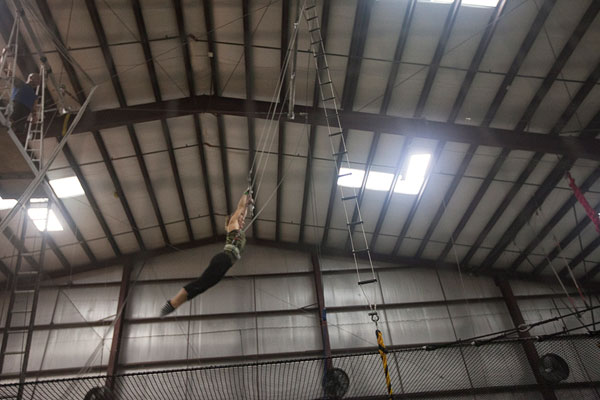 With help from the San Marcos Habitat Conservation Plan and the San Marcos River Foundation, three Texas State University alumni have created one of the RAD-dest ecological festivals for those who like to go with the flow. River Awareness Day debuted in August as the precursor to the Texas Wild Rice Festival, slated for this spring. Both events are aimed at educating the public about the San Marcos River, which is the only home to Texas wild rice, one of its eight federally listed endangered species.

Finally! A way to enjoy the beauty of Lady Bird Lake … and never get wet. Austin Water Bikes prides itself on helping Austinites explore the lake without worrying about getting drenched or falling in the water. The eponymous water bikes are an eco-friendly blend of kayak and bicycle, and allow cruisers to speed along the lake for moonlight tours, afternoon workout sessions, and team-building workshops.

To the untrained eye, the swarm of birds circling over the old Highland Mall in North Austin might be mistaken for a flock of the much maligned and often pesky grackle. On the contrary, these are Purple Martins coming to roost in the trees around the north side of the shopping mall. The dark birds with a purplish iridescence, distinctive tapered wings, and forked tails are known for their voracious appetite for mosquitos and other bugs. It’s like a bat emergence in reverse. Look for them between 8pm and dark, July to mid-August before they head for winter vacation in South America. Want to know more? Contact our local Audubon Society.

A giant, stuffed jackalope and tales of a UFO body are reasons enough to make a trek to Wimberley's Cowboy Museum, planted smackdab in the middle of the reconstructed Pioneer Town. The museum's owner, Jack Glover, has been delighting and raising the eyebrows of visitors for decades. The Blanco River flows through the 89-year-old’s veins, with a hint of nicotine and Cherokee blood, the latter being one of the reasons why his museum, which was formerly housed in San Antonio near the Alamo, made its stop in the Texas Hill Country. 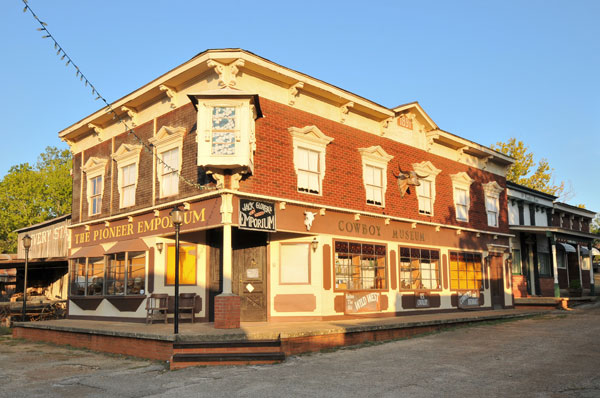 The entire Austin Aztex organization has a lot to be proud of this year – winning a national championship in their second year in existence, in a very competitive, 64-team league; setting a new record attendance in five straight games to end the season; earning Premier Development League Coach of the Year and Player of the Year honors – but the coolest thing of all may be the extent to which this really was an Austin team. Seven of the regulars grew up and played their youth soccer right here in the Austin area; almost all the rest are either from Texas or attend college here. Captain Zack Pope and goalkeeper Devin Cook (both from Round Rock) had great seasons; but it’s Tyrpak – a modest kid from Dripping Springs with a great nose for the goal, plus the pace and timing to tear open defenses with runs off the ball – who was voted the Most Valuable Player in the entire Premier Development League, which pretty much makes him the best amateur player in the nation, so it’s hard to vote against that.

If you're an astronomy nerd, someone who misses the view of the stars away from the city lights, or just the type of person who appreciates a beautiful view, then UT's "star parties" could be your higher calling. Completely free and held on the roof of Robert Lee Moore Hall on Wednesdays and Painter Hall on Fridays and Saturdays, this is a fantastic and unforgettable experience for people of all ages. So bring the family or a hot date, and see our solar system up close and personal through some state-of-the-art telescopes. 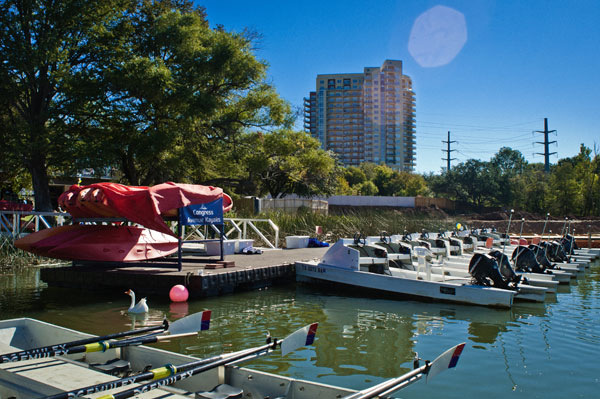 For years, Austin Rowing Club managed this sweet spot, this prime bit of lakefront property in the shadow of the looming and lovely Four Seasons Hotel. Last year, the city of Austin agreed to allow the ARC to continue its good work on Lady Bird Lake and cut the ribbon on a brand new, gleaming facility. As a part of the Waller Creek Tunnel Project (the creek empties out into a nearby lagoon), this stunning new 10,800 square feet of glass and light now not only houses sculls for the club, but is also home to businesses that rent kayaks and bicycles, a cafe featuring many local vendors, and expanded facilities for the ARC to continue its outreach on behalf of its noble sport. 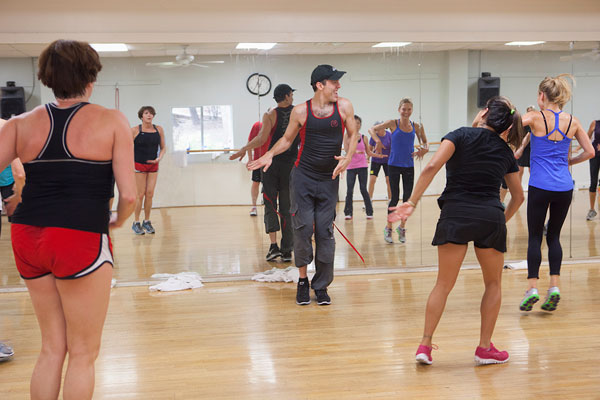