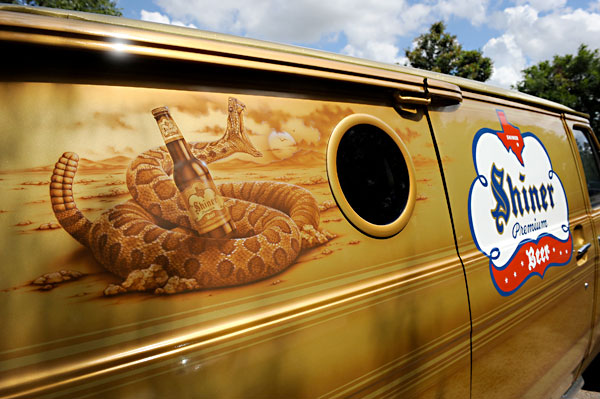 When Shiner Beers relaunched Shiner Premium earlier this year, they found the perfect way to celebrate: hunting down a 1970s boogie van and taking it to Rodriguez Rod & Cycle, where they painted it bright gold and airbrushed a mural of a beer-thirsty bald eagle on one side and a rattlesnake on the other. Just like Shiner Premium, which enjoyed a rockin' heyday in the early 1970s, this disco-era van has been resurrected from history, and now makes appearances around town, blazing in the sunshine like a glowing golden Phoenix. It's yet to be seen how this van will earn its infamy (rolling Seventies dance parties? party-bus-style taxi service? rentable Shiner-dispensary on wheels?) but we've got a good feeling about this one.