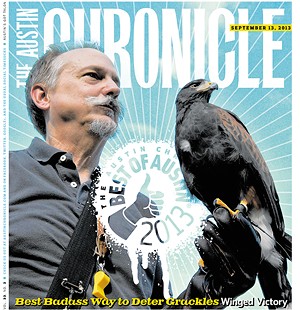 It's like nothing we expected. Calendar editor James Renovitch, photographer John Leach, and I got to spend a morning with professional falconer Steve Oleson and his noble pal, Meego. We were charmed by this elegant bird of prey in ways we never imagined. Meego gurgles like a baby. Steve coos back. That's what you see on the cover. A Harris Hawk and his partner in the hunt. In this case, the hunt is for pest birds.

Austin's flocks of grackles, starlings, and sparrows can sometimes reach Hitchcockian proportions. And while we personally have nothing against any of these birds – neither as individuals nor as blinding clouds that black out the sun – we understand why some businesses would find them pesty ... or even biologically hazardous. One of our editors came across an item in a nearby neighborhood association's newsletter, telling of a Texas grocery chain's initiative to hire a real, live falconer to help with their overwhelming bird problem.

Enter Oleson and his big bird. This team, collectively known as Winged Victory, earns back slaps and wing pats not only for innovative green solutions to problems that previously were handled with pesticide and other unsavory methods, but also for keeping alive a centuries-old tradition that transcends the glory of its romanticized depictions on movies and on TV.

Speaking of centuries-old traditions, you hold in your hands our 24th annual "Best of Austin" issue. We are starting a few new traditions this year. We have tweaked our Food section (née "Food & Drink") to reflect the changes in our new "First Plates" food issue that enjoyed its inaugural edition this past spring. The drink portion of the old "F&D" section can now be found in "Entertainment."

Also this year, we aggressively pored over your "Loose Cannon" votes to inform our Critics Picks and launched our first Thea Williams Memorial Award in honor of a friend, teacher, and fellow journalist we lost a few years ago. This first year of the "Thea" honors the work of two of our Chronicle interns.

The other notable launch this year is online. Our "Best of Austin" archive is something in which we've invested 24 years worth of content. We are very proud of it and very thrilled that our webmaster Brian Barry has given its searching capacity a bit of a tweak and redesign to make it easier for you to peruse. Please know that the "Best of Austin" is an ongoing story. Each year reflects one certain take on this town. To really understand where we are coming from, take a trip through the years.

"Best of Austin" is yours. Thank you, Austin.

If you had to cast an action movie with a bird, which species would you choose? Maybe an eagle, but they have a lumbering, Arnold Schwarzenegger vibe. Not to mention the patriotic associations might be a little too on-the-beak for modern audiences. How about a hawk? Still stately but with a bit more agility, like Jason Statham. Or perhaps a falcon, which, if it had legs, we're pretty sure would be doing parkour right now. There's no denying the badassness of birds of prey, not to mention the rare breed of human that trains and handles these princes of the sky. Falconry isn't called the sport of kings for nothing.

Although to hear master falconer Steve Oleson tell it, you'd think he was his birds' assistant. "He thinks I'm a good helper," says Oleson of his winged companion. However, with almost 50 years of experience it's safe to say he knows how to handle his birds. Did we mention he's a member of the Falconry and Raptor Council (!) at Texas Parks and Wildlife? All of these impressive credentials seem trivial when you hear Oleson soothe one of his Harris Hawks with a sound that's half cat purr and half frog croak. That's when you know the bird-trainer bond is strong.

Now let's talk about bird bad guys in Austin. How about dead-eyed bullies who steal french fries and squawk aggressively at anyone who looks at them wrong? You guessed it: the pooping, flapping pests of so many outdoor areas – the grackle. They flock to places with water and food and rarely give up primary real estate like a strip mall or restaurant's parking lot. But no matter how many times they steal mouth-bound chips from our hands we can't condone poisoning them. We just need them to find a new haunt, but that's easier said than done.

Unless you put Oleson on the case. As president of Winged Victory for seven years, Austin's very own pest-abating falconer has looked into grackles' cold souls and seen what they fear. If a simple hawk isn't scary enough, Harris Hawks in particular are native to this area and known as the wolves of the air because they hunt in packs. Not that Oleson's feathery co-workers need help scaring the bejeezus out of those prehistoric-looking nuisances. Winged Victory's team of birds of prey are employed at night not only to give them a Batman-esque panache but to keep the human element to a minimum. You don't want an unfocused hawk on your hands.

Grackle relocations are as simple as sending one of Oleson's birds out for a quick hunt. After the pests get their towers buzzed enough times they'll move on to safer grounds, permanently. The whole process takes about three nights with the grackles staying away for a few months to several years depending on the attractiveness of the area (seriously, stop feeding the grackles!).

With only a handful of Texas falconers with all the permits and training necessary to use birds of prey for such a purpose, Oleson is staying busy. His status as one of Austin's best is secure. Not just for keeping our cars safe from fecal bombardment when we park under a tree for shade but for his ability to control the action-movie stars of the sky.

The Wind Beneath This Year's "BOA" Wings: