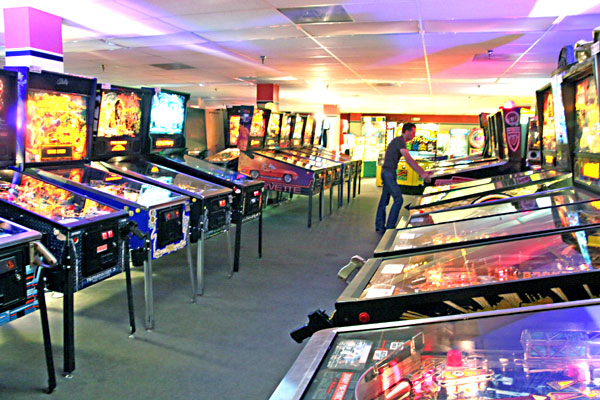 Nevermind your iPhone apps or your Xbox downloadable games. Fie on your Wii remote and your massively multiplayer World of Warcraft. For our money (50 cents, thank you very much), we'll throw our support behind an Italian-American plumber attempting to save his royal girlfriend from an ape with too many barrels. Pinballz brings back the highlights of yesteryear's arcade culture with more than 200 of the very best video games and pinball machines in a space rivaling the interior of that Tron computer. All ages are welcome – from the young to the young at heart – but make sure you bring a sackful of quarters and your A-game.

When we called Bee Caves Dermatology's Dr. Mary Ann Martinez late one Saturday night hoping for a solution for an especially itchy kid, we feared we'd simply be thrown a random smorgasbord of creams, ointments, and pills with little effect. But when she came up with a precise treatment for a case of head-to-toe eczema, we were so grateful that we didn't even mind the late-night trip to the pharmacy. Dr. Martinez is not only a great diagnostician; she's great with the young ones and cares enough about her patients to go the extra mile.

The Intergalactic Nemesis has always had its eyes on the stars. Well, that may be the only place it has not gone yet. The original live-action graphic novel stage show dusts down old pulp action for fresh-faced young international adventurers. From two-fisted tales of weird science in the old Little City coffee shop to a run at the Long Center and now tours of the Midwest and Australia, Jason Neulander's pulsating interstellar live theatre brainchild is a globe-trotting, family-friendly mind probe of sci-fi fun.

Bargain hunters, beware! You might get addicted to this sweet li'l website. Updated daily, it lists amazing free and cheap, discount deals focused on the Austin metro area but often stretching across the great state of Texas – from meals to museums to classes and movies, from around town to Downtown to the outskirts of town. Heidi Gollub and fam moved here from Canada a decade ago, and she still unearths some great finds and shares them with everyone. Scroll beyond the fast food and chain offers to find some homegrown Central Texas delights. If you've ever heard the plaintive plea, "I'm bored!" bookmark this on your browser and have fun surprising the family.

For youngsters wishing to leap into the political fray and learn about local politics, might we suggest staying informed about council plans for any further pool closures? And if the city does consider the unthinkable, might we suggest a good, old-fashioned occupation … of Austin's pools? We loved that the Friends of Shipe Park addressed this at their annual beginning-of-summer pool party. This sort of awareness is vital for every neighborhood. We can't imagine that City Council saw this cruel summer of record-breaking heat as anything less than a loud and clear mandate to keep these vital resources available to the people, and especially to goggled tots in water wings. So the next time the dais considers a pool-closing resolution, we vote revolution! Hold your noodles high!

It's a sad reality, but kids have smartphones these days. If monitoring your kid's Internet surfing wasn't hard enough, the unrated world of apps can be even more difficult to navigate. Make sure your child's phone is age-appropriate with this one-stop website chock-full of info to help a busy parent find books, games, and educational tools for the discerning little one in the brood. 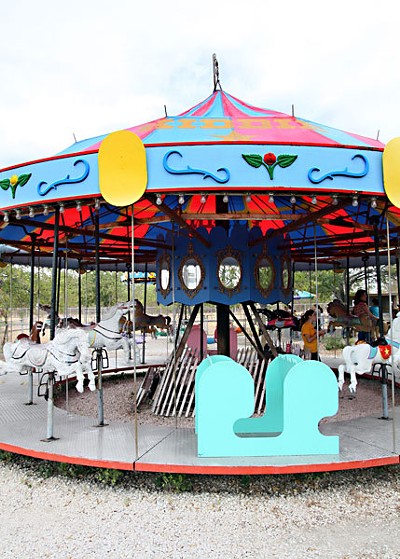 Upside down, around, and under, defying gravity 10 times over: The crazy, amazing playscape at Mueller is a moving work of art. It's designed by playscape leader KOMPAN, which specializes in organic forms and bright, primary colors. Get ready to defy gravity: Swings rotate in circles by shifting weight, the merry-go-round moves up and down as it spins, tire-swings-turned-Frisbees move in complete circles, a sandbox with water spigots captures the attention of toddlers, and a multifaceted climbing structure with open webbing lets kids fall onto safe, soft turf. All kinds of parents and kids fill this park throughout the day, making the playscape at Mueller Lake Park one of the most diverse and innovative places to get your play on.

How the kids at Reagan High do not have big heads, we do not know. First, their school is ground zero for the summer's coolest high school band competition, the Alvin Patterson Annual Battle of the Bands & Drumline show. Bands come from across Central Texas to join forces with the Raiders in the Austin All-Stars, our local reps at the battle, conducted by Reagan band director Ormide Armstrong. Then, bands from across the country come to compete against our home team on their field. And this year, our Austin crew took the title. Well, if that isn't enough, the Reagan band regularly wins or places in just about every contest it enters, and after the All-Stars' big win, the group was part of a select contingent that toured and played at West Coast colleges on the weeklong Southwest Bound Marching Band Caravan University and College Tour. And get this: This past spring, they got to play with Kanye. Yes, Yeezy himself. The Raiders backed him up on "All of the Lights." At Seaholm. During South by Southwest. Kid you not. Big heads: They'd be entitled to 'em.

After 32 years, one of the last kiddie parks in Texas maintains its focus on the preschool set with seven different rides and plenty of picnic tables for birthday parties. Everything in the park, from the Ferris wheel to the mini train that circles the acres, is just the right size to be thrilling without being intimidating. There are no cartoon character tie-ins, only real ponies the kids can ride. There is no proto-nightclub video-game arcade, only the real challenge of an 18-hole putt-putt green. The only bells and whistles here are from the piped-in calliope music. For over two decades, the Herring family has resisted the urge to give in to the lowest-common attention-grabbing doodads and has instead personally greeted every family who comes to enjoy this old-fashioned fun fair. For the 10 and under crowd, Kiddie Acres is the best spot in Austin.

They call it a "seasonal interactive playscape pool," but that's code for the best darn pirate ship in town! Moored in an all-ages outdoor pool, it has stairs, riggings, a porthole, and many ways to spray water at your mateys. Paired with two waterslides and a heated lap pool, this is the place for pirates, picaroons, parents, powder monkeys, parrots, and pals. 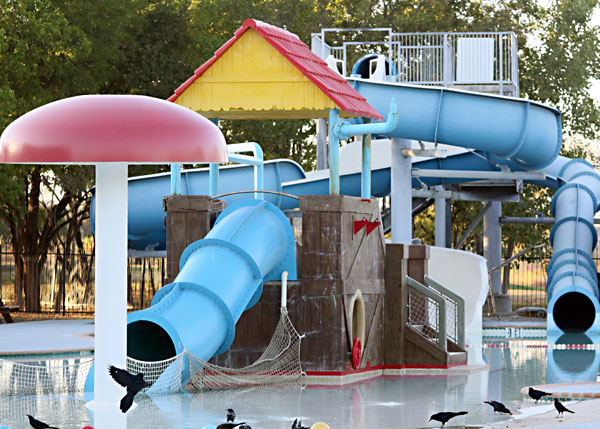 New parenthood is already an emotional ride, but when the the life of a wee one hangs in the balance, that roller coaster kicks into high gear. Thank the entire staff of the St. David's Medical Center Neonatal Intensive Care Unit; they do all they can to ensure that Mom and Babe have every opportunity to bond during this difficult transition. Their skilled, compassionate staff knows the importance of information for new parents and are willing and able to share every bit, 24/7, patching parents through to their child's actual caregiver and not just leaving them marooned in a well of confusion. It's clear this staff likes to stay connected and involved; each year they hold an ICU reunion. The next one happens to be Saturday, Oct. 15.

Even the most football-ambivalent can find something to rah-rah about in this visiting exhibit at the Bob Bullock Texas State History Museum. Perhaps it will be Galveston's Ball High School, the first team to play an official game in Texas in 1892, or learning that the Sugar Land Express was actually the nickname of a record-setting high school QB, or that World War II was the reason girls got their first breaks in band and cheerleading. If those factoids don't score the proverbial touchdown, perhaps the insane tulle homecoming gown from the Fifties, the entire room carpeted in cushy Astroturf, or the maroon blob that serves as Austin High School's mascot – the inimitable Mr. Maroo – will send them dancing into the end zone.

Most Likely To Cause Squeals, Then ZZZs
Jumpoline Park

Remember those bouncy castles from yesteryear? Well, this is pretty much the same thing except instead of bouncing in the belly of an inflatable dragon that fills a portion of the backyard, Jumpoline Park is an indoor field of row upon row of trampoline surface as big as a massive department store. Let's face it, sometimes parents deserve the opportunity to exhaust the kids in a healthy expense of fun and energy (so as to make them more pliable when facing the dreaded bedtime). Jumpoline fulfills this role admirably.

A rising number of tiny tots suffer from plagiocephaly – or "flat-head syndrome" – which can be corrected with helmet therapy. Sounds like a drag, right? Not when local design firm Evolution Graphics provides custom detailing. Tricking out plastic orthotic bands in everything from burnt orange to Cat in the Hat characters, the donation-only service ensures that baby isn't just getting better, but looking good doing it. These steezy shapers are super trendy, so make sure to check out Evolution's website for info on production schedules. 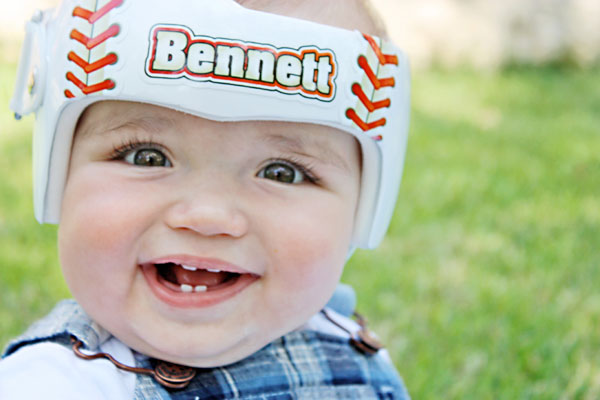