We love them. They love us. In terms of outreach, ASA has become one of Austin's most beloved community-oriented nonprofits. ASA does very serious work providing housing and care for HIV-positive Central Texans, and the staff works hard to make sure that its fundraising is fun. Founded in 1987, ASA is the region's oldest and largest community-based organization addressing the local AIDS crisis. Providing direct care services to more than 1,500 people and testing and educating 10,000 more every year requires a lot of help, and through its AIDS walk, Viva series, Red Ribbon dinners, OctoTea dances, and a host of other regular events, ASA continues fighting the good fight, and we're all the real winners in that.

Veterinarian Ellen Jefferson has channeled her lifelong passion for animals into a full-time mission to make Austin a genuine "no kill" city by 2012. Under Jefferson's leadership at Austin Pets Alive!, the nonprofit has become a key player in the city's no-kill vow. That means finding safe, happy homes for healthy and treatable pets – thousands of which end up at the city shelter. Put your paws together, y'all, for Dr. J. 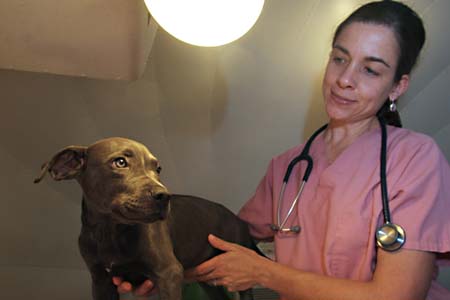 Christian conservatives seem committed to rewriting the Constitution, so the need for the Texas Freedom Network to keep distinct the line between church and state has never been greater. Texans both secular and religious come together to keep the faith when it comes to the First Amendment.

You know you're an icon when people visiting from out of state (or even out of the country) happily tell their townie friends "I saw Leslie!" as if it's a badge of having nailed the Austin experience. Such is the prominence achieved by River City's favorite cross-dressing, neighborhood-rambling magnet-doll magnate, former mayoral candidate, and T.C. Boyle lookalike Leslie Cochran. 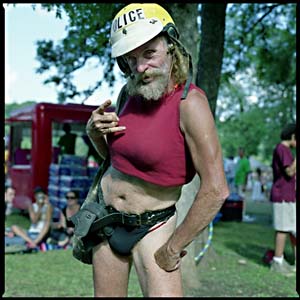 He's admittedly not Mr. Charisma, but Mayor Leffingwell's meat-and-potatoes approach to governance has gotten a lot done in one year – attracting several high-profile employers, calling a transportation bond election for November, and more, all with his Yogi Berra-esque brand of groan-worthy humor. While we haven't agreed with all his decisions, we doubt he'd expect us to – and that's the kind of straight-up mayor we have.

Although he's been a mover and shaker in Austin for a while now, Mayor Pro Tem Martinez is doing much more moving these days – on up. Expanding his roles and responsibilities while humbly deflecting kudos, this East Austin son's sky is seemingly limitless.

As U.S. representative for Central Texas, Doggett keeps actively connected to the community and personally invested in education, health care, and volunteer service. No matter how hard the Republicans try to gerrymander his district or sideline him in Congress, our Democratic supercongressman has remained a firm voice for health care and education on Capitol Hill, and a constant presence at community events throughout his district. His latest victory? Forcing Gov. Rick Perry to act like a real governor concerning education funding. Score one for the federal government.

Don't let the bashful smile fool you. Robbins may be slight of stature (he once joked that if he turned sideways, he'd disappear), but inside that oversized blazer, you'll find the heart of a lion undeterred after three decades of fighting for sustainability, transparency, and wise energy policy at City Hall. A tireless wonk and expert on everything from energy efficiency to synthetic fuels, Robbins – and his work The Austin Environmental Directory, now in its seventh edition – has become an indispensable resource to city officials, so much so that in 2007 they named a Downtown cooling plant after him. How cool is that?

Every Saturday for two years, rain or shine, a small but dedicated band of animal lovers stood outside the now-closed Petland along I-35 in far South Austin, bearing signs that read: "Honk for no more puppy mills." The City Council heard those honks, and in late July passed a citywide ban on retail sales of dogs and cats. Woof!

Stuff your recyclables into a blue cart and roll it to the curb. Stuff yourself into a little blue-and-white car and roll it from the curb. Both the city of Austin's easy-breezy single-stream program for residential recycling and Car2Go's expanding fleet of rent-by-the-minute smart-for-two cars encourage the transition toward reducing our carbon footprint, not only as individuals but as a community. Efforts to live more sustainably can seem too great a responsibility for one person, and these programs offer tangible results, greater than any of us could accomplish individually, as we simultaneously shrink today's landfill and clear tomorrow's air. 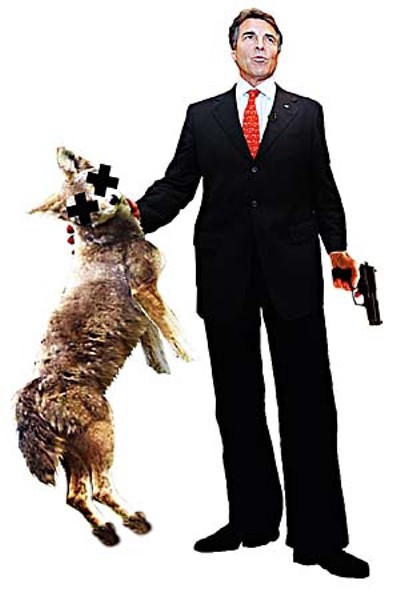 What’s the saying – "That dog don’t hunt"? When Governor Good Hair claimed he’d gone all Rambo (and we mean Rambo III, not First Blood) on a coyote while out for a run, we all had just one question: Who needs a laser-sighted pistol when they’re jogging?

It’s been quite a while since anyone at BOR was a student. In fact, the hard-hitting politics blog has been going long enough to produce its own alumni-turned-campaign pros, yet they continue to find enough new writers who share their raw glee in proving conservatives wrong to keep the local progressive fight strong on the Internet. According to IfItWereMyHome.com, had the BP oil spill happened here – Austin as ground zero – it would have spread north up to Temple and Killeen, south to San Antonio, east to Brenham, and, with an ominous stretching finger, west of Sonora all the way to Iraan. The explosion of BP's Deepwater Horizon well on April 20, 2010, resulting in the deaths of 11 workers, injuries to 17 more, and the gush of approximately 200 million gallons of toxic crude into the Gulf of Mexico, is the obvious news story of the year. How the mysteriously shrouded cleanup effort shakes out may determine its status as news story of our lifetimes.

When Joseph Stack flew a plane into a crowded office block on February 18, 2010, killing Vernon Hunter and leaving behind a deranged anti-government manifesto, most people would have expected some statewide soul-searching. But not Gov. Rick Perry. Guess when you abandon the Governor’s Mansion for a $10,000-a-month villa in the hills, that stuff don’t matter much. Lee Leffingwell's office is a well of "BOA" talent, with readers giving Communications Director Curtis and Policy Director Everhart the nod. While both carry impressive résumés – Curtis has worked for Will Wynn's office and at other local agencies, and Everhart is a local campaign wunderkind – their vitality, youth, and connectedness give us a feeling they may not stay behind the scenes much longer.