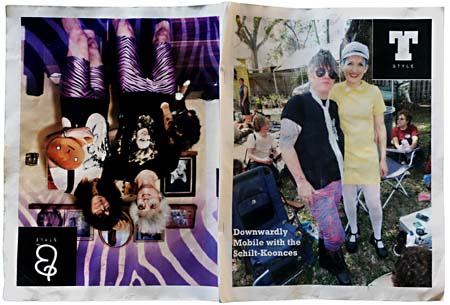 Best Ironic Use of Letters

We of a certain overlooked generation have been down the block and back with sincerity a few times, but by now it's pretty evident we've settled down and shacked up with irony the way goddess intended. And to keep our committed thing hoppin', we've been known to indulge in some consensual mutual parody from time to time. Submitted into evidence: nutty zine B Style T Style, the brilliant brainchild of local queerleaders Paige Schilt, Katy Koonce, Ann Cvetkovich, and Gretchen Phillips. Jumping off from local gay product catalog/lifestyle magazine L Style G Style, the sprightly little pub offers some genuinely helpful service journalism and thoughtful rumination while also skewering mainstream culture of all stripes, mocking the clichés of "alternative" or "free" publications (including this rag), and engaging in a now-familiar appreciation/mocking of what were once Middle American fashions, or at least aspired to be (Exhibit A: purple zebra spandex shorts). Its makers are just as adept at lampooning their kind, taking jabs at their own self-aggrandizing tendencies and bent for abstract thinking, and it's all wrapped in a visually stimulating, well-composed bow. Making fun of normals has never been so queer.