Best 'Best of' Nutty Name Check
AustiNuts in the 'Statesman'

Since when was an Austin Chronicle "BOA" banner a sign from God herself? Since the Austin American-Statesman told us so. Thanks, guys! In what we are refusing to call an error but a divine act of providence, last year we added some sparkle to the otherwise straightforward Austinuts moniker. AustiNuts is better. Waaay better. And apparently the Statesman, AustiNuts owner Cipi Ilai (Hi, Cipi!), and those geniuses at Kellogg's who don't know what a "snack" is agree. Oh yeah, and the eternal presence agrees, too.

Pssssst. Hey. Heeeeeyyyyyyeee. Is it drunk and you're late? I mean, are you drunk? Need someone to talk to? Call 481-BONE, and ladies of the night Jodi and Emily will be there for you, sugar tits. This brassy, besotted duo's taken a love of the bottle and the gift of gab from the bar stool to the Web, offering afterhours advice on sex, love, and assorted bodily functions during their Thursday call-in show/podcast. They slur truth to power (with the help of Jameson) and offer a cock-eyed view of the lush life that could only come from Austin. Call them; they're waaaaiiting. 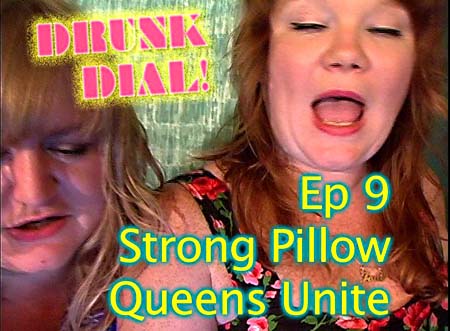 And by "411," we mean the deets, the score, a clue, the data, the dirt on everything you need to know or report in our fine metropolis. Austin's 311 harkens back to a time when customer service wasn't just a long wait on hold and a byzantine odyssey through extensions and transfers that ultimately end up in dead ends with you throwing your phone across the room. Every time we've used this 24-hour service, service has been key. If they don't know it, they look it up. If they can't find it, they ask a supervisor. Whether we're reporting a pothole or a messed-up traffic light late at night, calling to request a change to the size of our city-sanctioned garbage cart, or registering a "feral hog complaint," our city's encyclopedic ambassadors of infrastructural info have the answers. With a smile. We can hear it.

Indiana Adams' eye for piecing together fab from drab is impeccable. With barely a year under her (well-coordinated) Web belt, she's already made quite the scene, having gotten her ATX-centered fashion blog national attention with nods from Glamour.com and Lucky, and she was nominated for a Texas Social Media award to boot. All that while thrifting, DIY-ing, and scouring the city for fashion finds on the frugal fashionista's budget. Local is king on Adored Austin with coverage of glam events and on-the-street snapshots of our stylish head-turners.

When contract publisher and graphic design company owner Marla Camp bought the Edible Communities franchise for Austin in 2007, we had no way of knowing how quickly and completely Edible Austin would become a reliable resource for the Austin artisan food community. Whether it's a BookPeople reception for a cookbook author or a benefit for the Sustainable Food Center, Urban Roots, or Gulf Coast renewal, Camp and Edible Austin will be there. Perhaps Camp's greatest accomplishment is Edible Austin's sponsorship of the annual Eat Local Week every December – several days of wildly popular events showcasing local farmers, ranchers, artisan food producers, foods, spirits, beers, coffees, and teas.

Best Ironic Use of Letters
'B Style T Style'

We of a certain overlooked generation have been down the block and back with sincerity a few times, but by now it's pretty evident we've settled down and shacked up with irony the way goddess intended. And to keep our committed thing hoppin', we've been known to indulge in some consensual mutual parody from time to time. Submitted into evidence: nutty zine B Style T Style, the brilliant brainchild of local queerleaders Paige Schilt, Katy Koonce, Ann Cvetkovich, and Gretchen Phillips. Jumping off from local gay product catalog/lifestyle magazine L Style G Style, the sprightly little pub offers some genuinely helpful service journalism and thoughtful rumination while also skewering mainstream culture of all stripes, mocking the clichés of "alternative" or "free" publications (including this rag), and engaging in a now-familiar appreciation/mocking of what were once Middle American fashions, or at least aspired to be (Exhibit A: purple zebra spandex shorts). Its makers are just as adept at lampooning their kind, taking jabs at their own self-aggrandizing tendencies and bent for abstract thinking, and it's all wrapped in a visually stimulating, well-composed bow. Making fun of normals has never been so queer. Every Wednesday morning, 9-11am, deejay and Louisiana-music master Tom Mahnke invites you to board the "Zydeco Train," the Cajun/Creole choo-choo, as it were, for the qui, the quelle, the où, and the quand of Louisiana music, from tributes to Clarence "Frogman" Henry to the recently passed Bobby Charles ("See You Later, Alligator"), from all points Acadiana and all things Cosimo Matassa to the city of New Orleans. It's Fais Do Do, two hours of east of the Sabine bliss. Écoute, baby, écoute!

If it's an early weeknight out with your friends and you've got half a six-pack under the table and dauber ink already all over your fingers, you must be at bingo. Between rounds, instead of buying pull-tab cards or making giant origami with your losing sheet, check out a copy of Bingo Gossip. This statewide, one-woman operation was started by Missy Mouser after she graduated from Stephen F. Austin State University in 2005 and provides jokes, recipes, info about pro-bingo politicians, and cheery profiles of bingo patrons from Longview to Corpus Christi. Bingo Gossip gives a new perspective on people not often positively represented in those daily wire stories about small-town life. Who says print is dead? For many, any entertainment expense outside the DVD rental kiosk requires some budgeting. That's why the library's so indispensable. Films and DVDs, including multidisc sets, can be kept out for up to three weeks, and the library regularly adds recent blockbuster, arthouse, and kids' selections to its collection. Online holds can be arranged that will deliver rentals to the branch of your choice, and the same goes for CDs, audiobooks, and paper volumes too, all of which can be renewed. And what's better than free?

Oral history is the people's history: a view of a time through the voices of the humble, individual humans who lived it. Outside of the mainstream media matrix of power, wealth, and privilege, history is taking place every day, and oral history is its record. The Texas After Violence Project is an exemplary narrative and human rights project created to document the stories of people "touched by serious violence or other serious human rights violations, the criminal justice system, incarceration, and executions in Texas." In the words of the project: "We encourage people to speak their own truths. We encourage communities to practice listening." Our world is a more honest one for it.

This Greater Austin Creative Alliance blog offers reviews of local theatre productions, events, and specialty shows. The blog and the site itself are a great introduction for newbies and a resource for veterans on different stages and troupes (prominent and underground alike), promoting increased awareness of and stronger participation in local theatre. While the blog informs, GACA offers discounts to shows, freebies here and there (like a beverage at Coffee Bean and Tea Leaf), and invitations to happy hours with fellow thespians.

Best Way To Find Yourself
Gowalla

Life is a game, the saying goes, but Gowalla knows where all the pieces are. It's called location-based social networking, in which your phone automatically checks in at real-world sites. Tracking your friends is helpful, but discounts and prizes from vendors you visit are even better. Launched at South by Southwest 2009, Austin-based Gowalla returned to the Interactive Festival in 2010 to go toe-to-virtual-toe with New York-based rival Foursquare, picking up the award for best mobile service and a whole hunk of international tech buzz.

Best Way To Get Thee to a Nunnery
'Ancient Voices,' KMFA

From the haunting chants of Medieval monks and nuns sung a cappella to the flirty madrigals of the Renaissance and measured intensity of Baroque dance music, Ancient Voices brings church to us on Sundays. At 9am and 4pm, this show transports Austin through early Europe's extraordinary tapestries of sound. Peace and a sense of the sacred emanate from the radio. Listeners are gently guided through history by host Sara Hessel's timeless voice.

Erin Hanson's dreamy photography has a distinctly vintage vibe, with an eye for dilapidated buildings, sneaky signage, portraits practically swirling with dust motes of a bygone era. No surprise, then, that her side project, the Recovering Lazyholic, packs just as much retro punch. "The Prescription Is Doing," goes her slogan, and her minimalist "1 Minute Photoshop Thoughts" series – which illustrates the 12-step recovery program and the difference between "want" and "need" – strikes the same balance between kitsch and sincerity, wordplay and playful imagery. And that's saying a lot in this town! Since the trashy, porny, and beloved TWiT (This Week in Texas) has gone AWOL, the question has been who will take up the bar gossip mantle? The good folks at Charlie's Austin have been publishing their own glossy rag for these past few months – and they've already gone through a name change(!) from Lavaca Caca to Lavaca Enquirer. Dang it. Lavaca Caca was perfect and oh-so-meta as it called itself out on the long and proud tradition of gay bar bullshitting. Devoid of advertising space (at least for now) this new mag stays true to what it is: dancey, pervy, dirrrrrty fun. We suspect they have achieved some level of success because, as of yet, we've been unable to obtain a physical copy of the magazine formerly known as Lavaca Caca – they've been flying out the door like, well, tricks in the morning.