There's a whole town just east of us giving that old truism "learning at the foot of the master" some legs … and some voice. Jazz master and Smithville native son Hannibal Lokumbe (né Marvin Peterson) came home to Central Texas to settle in Bastrop after Hurricane Katrina. For the past two years, the Grammy-nominated trumpeter/composer has led that entire community in some fantastical bursts of cross-cultural exploration and improvisation in two glorious citywide New Orleans New Years celebrations which featured area school students pumping out some seriously fine holy modal jazz, a community choir of everyday folks tackling rhythm and harmony and sounding like angels, honored guests like Irma Thomas, Dr. John, the Treme Brass Band, and more. This year, Africa Comes to Bastrop is not only the name of the holiday celebration for 2009 but what is going to go down, as Lokumbe and the entire city welcome West African master drummer Moussa Diabate and the 14-member Djeli Kunda drum and dance ensemble on the last Saturday of this year.

"Strength in numbers" is a truism that applies as well to dancers as political movements and labor unions, and no one in Austin grasps that better than Ellen Bartel, who has spent almost as much of her time here bringing dancers and choreographers together as creating work for her own Spank Dance Company. Thanks to her tireless organizing, the city now has the Austin Independent Choreographers e-mail list, which shares information among those in the dance scene, and, best of all for fans of modern dance, showcases for local dance makers such as Dance Carousel in FronteraFest, Hot September Flurries, and the new Big Range Dance Festival. We're grateful that she keeps us all in step.

Ballet Austin's biggest fundraiser of the year is a glittering trip to fantasyland. From the White Nights of Imperial Russia, to an evening of Frank Sinatra tunes, the themes for the fete are varied and diverse but always pulled off with tremendous style. Previews of the upcoming season, cocktails, dining, and dancing draw the bigwigs of Austin, but anyone can attend for the price of a ticket.

We love this repertory cinema founded a few years ago by a couple of crazy college kids who were inspired by the legendary Cinémathèque Française of Henri Langlois and Austin's own pioneering Cinematexas program of the Seventies. Monday nights at the Texas Union Theatre, the Cinematheque introduces a whole new generation to classic cinema – from the silents and Kurosawa's samurais to film noir and French New Wave – and all for free. Vive le ciné! 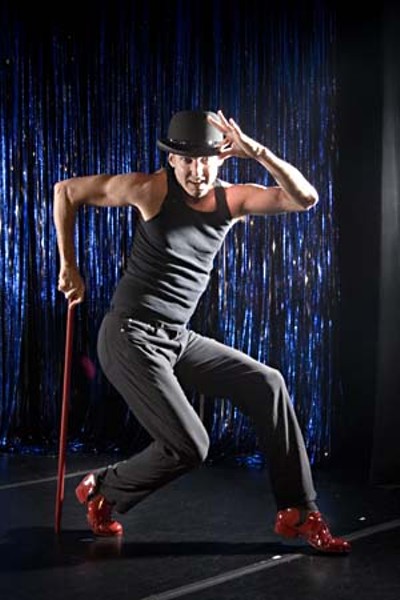 The reason we revere Bob Fosse wasn't just the slinky, sexy moves that were his choreographic signature; it was how he could slip all that jazz into a show and make it come alive in ways that thrilled and captivated us. Robin Lewis mastered Fosse's moves on Broadway in the tribute show Fosse, but what makes him such a splendid heir to the dance legend is the way his steps – which can range from Fosse's serpentine slides to chorus-line kicks to hoe-down stomps – always animate the action and lift it to new heights. And that's true whether he's setting steps on professionals at Zach Theatre, students at UT or St. Edward's, or kids at TexARTS, the arts company he co-founded. He has a gift for generating excitement in anyone who can move their feet, and the results never fail to razzle-dazzle us.

Best Lyrical Dream Yet to Be Realized
Ryan Willis' 'Public Enemy: The Trinity'

Designer Ryan Willis had a dream and built a mind-blowing book: lyrics of three Public Enemy albums presented with the aesthetics of a medieval Bible. Line numbers like a hymnal so you can reference Chuck D by verse and chapter. On fine hand-laid paper with the revolutionary verse of Public Enemy, this book is set in Adobe Jenson, based on a Venetian old-style text face cut in 1470. Now all Willis needs to do is get a publication contract going and have this book mass produced so we can all "Fight the Power." 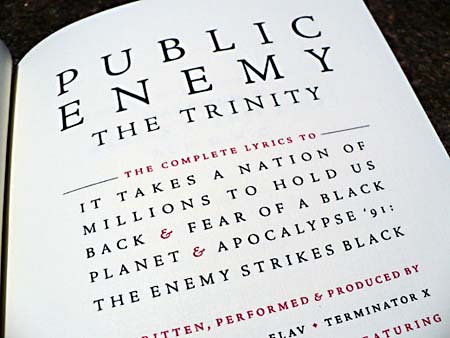