Any legislator who can say no to Bettie Naylor should be ashamed. At the very least they should take a break from the bad job they are doing and re-examine their purposes in life, because this frisky octogenarian and effective political ally is wise beyond her years and could show them all a thing or two about compassion, benevolence, and doing the right thing. This progressive Texas native came to Austin in the Seventies and joined the emergent feminist movement. She was involved in some of the state's earliest gay-rights battles, as well, helping found the Lesbian Gay Rights Lobby of Texas (now known as Equality Texas) and the original national Human Rights Campaign Fund. Now, our beloved whippersnapper is taking on a challenge close to the heart and closer to home as one of the leading figureheads of Pride Build 2007, a collaboration between Habitat for Humanity and the Austin gay community to build a home for a lovely local grandmother named Marta.

According to Lege lore, in person and socially, Smilin' Tom is one of the nicest people with whom you could hope to talk state business. But once that House gavel is in his hand, it's Tough Guy Tom all the way. His interpretation of House rules was widely seen as a dictatorial power grab, but he defended it as the only way to run the chaotic chamber. Like him or hate him, Craddick defined the Lege this year. This Austin couple has given money, time, and effort to SafePlace, People's Community Clinic, the Salvation Army, the National Association of Hospital Hospitality Houses, and dozens more good causes in Texas and beyond. This year, their commitment to community was defined not just by giving a permanent home to the Austin Children's Shelter on the site of their Rathgeber Village but by convincing others to give even more. Thank you, Mr. and Mrs. Rathgeber, for proving that real philanthropy isn't about deductible donations.

Our affable, charming, and handsome mayor has legions of fans across the city, crossing party lines as well as socioeconomic lines. With a mission of controlled growth while helping Austin achieve its dazzling potential and preserving its natural beauty and inherent spirit, William Patrick Wynn's second term has won him even more fans than his first one. With a firm grip on Austin's future, Wynn will continue to win the heart of Austin. Especially if he keeps wearing those jogging shorts around the cameras. Ooh la la! 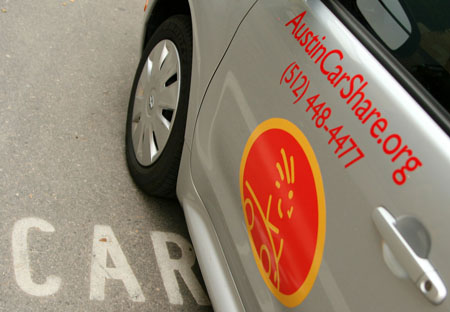 A first for Texas, Austin CarShare is opening eyes to improve and inspire by way of another much cheaper transportation option – a taxi you drive. With online booking, variable rates, and convenient pickup sites around Central Austin, it's ideal for bus riders, cyclists, and commuters alike. This program benefits not only each individual member but our jam-packed streets and that fluffy thing above us we call our atmosphere. Way to start a Texan trend simply for the sake of Austin and our world.

Why does Austin love the most liberal Texan in the U.S. House? We’ll let his words answer that. “We were reassured that progress was being made in Iraq 500 deaths ago, 1,000 deaths ago, 2,000 deaths ago, 3,000 deaths ago. Like the boy who cried wolf, this president cries ‘progress.’ What progress? With all this talk about benchmarks, I think it’s time to get off the bench and bring our troops home.”

Education is a rewarding challenge and one of the most important occupations in the world. This city is full of bright and creative kids with fresh minds to shape. Whether you are teaching multiplication with math beads in a Montessori classroom, taking a group of home-schoolers to the Wildlife Refuge to bird-watch, or preparing Austin Independent School District high schoolers to write college papers, your efforts have not gone unnoticed.

They're coming in droves to plunk down $500,000 for their 1,000-square-foot piece of the Downtown skyline, aren't they? The Spring, the Monarch, 360, the Austonian, the 5 Fifty Five, the Red River Flats, the Legacy @ Town Lake, La Vista on Lavaca, the Altavida, the Shore, Brazos Place … the list goes on. Is it the Californication of Austin? Or is it returning Downtown Austin to its original status as a destination for locals? Are we sprinting toward being a world-class city? Or are we pillaging our past and selling it downriver? The answer is somewhere in between and is one of the hottest issues in decades.

This team of witty women (and men) makes political diatribe go down smoothly with a side of snark and a shot of tequila. Meanwhile, they've been working hard to get bloggers treated seriously as hardworking and accredited journalists. Whether it's shining a spotlight on policy or doling a manicured-finger wag to the already elected, this blog is an essential daily stop for governmental gossip.

In The Pink Texas
www.inthepinktexas.com

$750,000. That's what the city offered as a partly forgivable loan to local restaurateurs the Perez sisters in their negotiations with Marriot Corp. over a stretch of back-alley. But it was never really about money. It was a fight over the future of the city's heart, whether subsidies were just for big developers, and whether the small businesses that defined Downtown were to be squeezed out to make way for another skyline-ravaging tower. 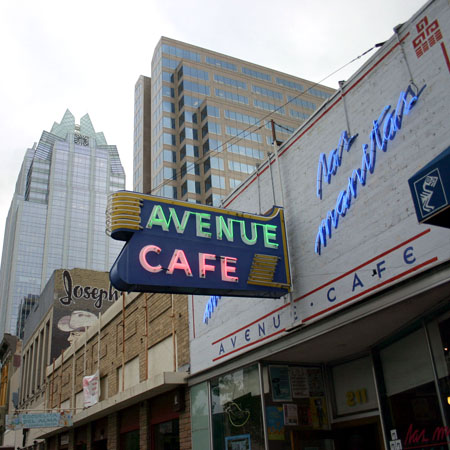 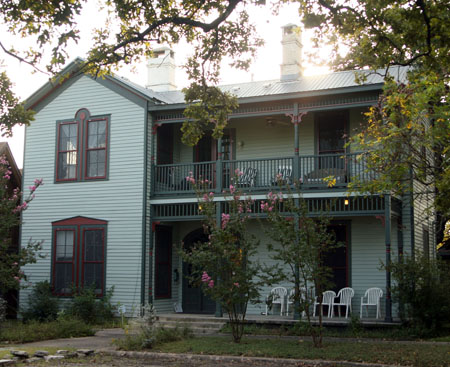 It's the kind of place you hope you won't ever need, but if you or a loved one do, you'll realize how profoundly they can improve the quality of life by providing low- to no-cost physical and emotional support and services for persons living with HIV/AIDS, cancer, and hepatitis C. The Wright House is the kind of nonprofit that gives Austin its stellar reputation for helping those in need. Along with peer education, support, and community education at a variety of area locations, Wright House provides something else: the human touch and a deep sense of dedication.

It's rare that Texas is faced with a real constitutional crisis. But did Speaker Tom Craddick break the rules in how he ran the House? Supporters say he was just keeping those rowdy reps in line. Opponents called him a dictator. At the moment, it's all in the hands of Attorney General Greg Abbott, whose anticipated December decision may alter how the Capitol works.

Office of the Speaker of the Texas House of Representatives
Room CAP 2W.13, PO Box 2910
www.house.state.tx.us/speaker

Who can turn the world on with her smile? Who can take a nothing lesbian scene and suddenly make it all seem worthwhile? Why it's Kitty, grrrl, and you should know it, because if you're not on her list of more than 2,000 local women who are interested in happenings of interest to women who love women who love food, then you are missing out. Plus, you are missing out on Kitty herself, the local bon vivant, fashionable dame, and snappy writer behind the regular and informative witty missives. Foodies, the "Best of Austin" award-winning group behind the list, is a social group of women who meet in a variety of settings, giving local babes more options than just infrequent bar nights to meet and, ummm, eat.

So Mr. Watson went to Austin. Texas Monthly called him rookie legislator of the year, because when our former mayor moved into his office in the Capitol complex, he acted like, well, a senator. As vice chair of the prestigious and powerful Transportation and Homeland Security Committee, he helped keep some sanity in the toll-road debate and proved why he was upper-chamber material.

What a year it's been for Susan McDowell. A visionary, you deemed her. Her kids at LifeWorks would do the same. Her work provides support and care for troubled youths and families, filling in the cracks where most of these kids would usually fall. Truly, no child left behind. McDowell, voted one of Austin's top "Under-40" superstars earlier this year, makes a difference. It makes you wonder: If we figured out how to clone a hundred McDowells, would homeless teens even exist anymore? Would the sexually abused feel like they had no place to turn? Nah. She'd be on it.

You can count the years of this old Austin neighborhood in the rings of so many shady trees that line the streets. You might not even mind being stuck at a light or stop sign, awaiting the flow of bike traffic or the ducklike waddle of a local nursery-schooler headed for Shipe Park. The original Austin planned community, Hyde Park is respite in the form of neighborhood, a template that so many of these new infills only wish they could emulate but miss by a long shot. And great news: The council is finally looking to fix the sidewalks.

The first year was all about the curiosity and initial attraction: Diane "Kitty" Murray sent out a call on the Craigslist Women Seek Women personals board to gather women together for the common goal of exploring local cuisine and one another. Women did respond – at first a bit awkward and shy but steadily warming – to this bold new concept. By the second year, it was bona fide infatuation with a list more than 1,000 women strong – gooey, mushy, and obsessively supportive of the semiweekly meet-ups at local restaurants and coffeehouses. By year three (a milestone marked with a luscious feast at Clay Pit), this group of more than 2,000 Austin women has settled into a delicious comfort zone of trust and mutual understanding. If Foodies were in a relationship, we'd guess her therapist would say she was at a pretty healthy spot for her third anniversary.

As owner of the Natural Gardener nursery, host of KLRU's "Backyard Basics," and longtime personality behind KLBJ's Gardening Naturally, John Dromgoole is not just your go-to guy for all things organic; he's a pioneering veteran of Austin's green scene and an integral part of the ever-growing efforts to keep Central Texas (more than just) livable. Meanwhile, Austin CarShare and It's My Park! Day co-founder Brandi Clark works not just to sustain the things that make Austin great but to gather them into one cohesive force. Her Austin EcoNetwork takes a holistic approach to Austin's myriad holistic-minded organizations, providing them with an online forum for exchanging ideas, organizing events, and introducing the right hands to the many left hands of Austin's green scene.