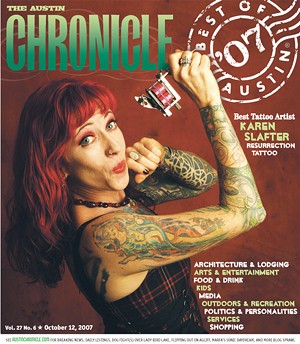 When "Best of Austin" cover gal and Best Tattoo Artist Karen Slafter was a young girl, she would draw tattoos on herself and imagine life as a painter. She arrived in Austin to attend UT, an 18-year-old self-described "baby punk rocker," hellbent on total immersion in the local music scene all the while pursuing her more practical goal of becoming a geneticist.

At 18, the most influencing change agent in her life was her immersion in the Austin of the mid-Eighties, a time and place that launched "slacker" as a valid life goal. A few years later, Karen got her first tattoo, a dragon that has since been covered by the elaborate sleeves of art she wears today. That first hit of ink got her thinking that tattooing might be a way to make money as an artist.

"I moved away to Atlanta for a few years," she said, "but the tattoo world there was really sexist." She moved back to Austin and began an apprenticeship, a move that would allow her to merge the sciences that she loved – biology and electronics – with the arts that compel her, as well as allow her to interact with people. "Da Vinci would be proud!" she beams.

That was the early Nineties, when female tattoo artists were still a novelty, even in Austin. Since then, the number of women has grown. "Our bedside manner is different," she says. "We have different goals than being the baddest macho guy on the block." And not only has the number grown, but women are actively being sought out.

"Tattooing is a transformative process, and often people come in for a way to actualize the pain of an emotional hurt" – or healing, Karen says. "You made a choice to be happy, and you marked it on your body."

At the age of 18, Karen Slafter made her own choice – like so many others looking for a life outside the ordinary – to come to Austin, Texas.

"Austin is a city full of freethinkers," she says. "We choose to live a different kind of life; we want to not get wrapped up in money and greed and the destruction of the environment and choose to live happy lives of our own making."

We couldn't agree more, and we've put it in ink!