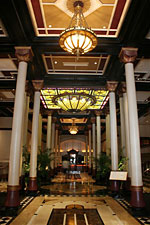 Outside, Col. Jesse H. Driskill's architectural masterpiece may be overshadowed by neighboring downtown developments - the bust of ol' Jesse on the roof probably has to lean to see the state house now - but nothing can detract from its internal glories. From the art-nouveau-influenced, stained-glass lantern that illuminates the pillars and marble floors of the three-story lobby, to the plush, ivory-colored bathroom towels, monogrammed with a thick, swirling D, everything about the Driskill whispers refinement. To think that, in 1969, the very same halls where LBJ had once romanced Lady Bird were scheduled for demolition.