If your interests range anywhere from, say, football to hard-ball politics, Jeff Ward is your man. Since joining the KLBJ-AM team in 1994, the former Dallas Cowboy and Libertarian-leaning Ward has cornered, and tackled, Austin's afternoon talk-radio market with his well-researched, tuned-in talk on an ever-widenening spectrum of subjects.

Who is Mike Jones? What you should be asking is "Who is D-Train?" OK, it might not roll off the tongue quite as well, but it is a question you'll like the answer to. Paul Wall, Slim Thug, and 50 Cent aren't the only reasons to keep your dial fixed on Hot 93.3FM. Take a ride on the D-Train; you'll definitely enjoy the trip.

The Statesman's lead columnist, John Kelso is a Readers Poll favorite once again. His bubba-fied take on Life as It Is in Austin is as Austin as an armadillo and as Texas as Texas Tea. He's gonna have to fight to keep his crown, however, as two able runners-up gave him a close call: the Chronicle's own Margaret Moser, known for her extensive, big-hearted features on Austin music legends; and the Statesman's Jane Greig, who, in her "Ask Jane" column, dispenses handy tips ranging from entertaining guests over the holidays to disaster preparedness (which some may argue are the same thing).

Ooh, snap! That’s right, they said it! Pink Dome and Burnt Orange are often so sharp and critical, it is actually possible to hear our Guvna' cringe all the way from Lavaca. Establishing themselves as the pre-eminent Austin-based anti-red state blogs, they’re helping to keep the Capitol accountable and the rest of us well-informed. 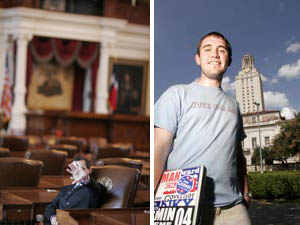 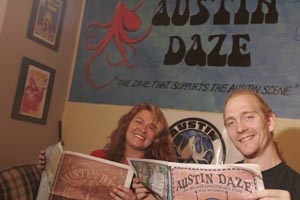 Best read while inhaling (...), this is an eclectic look at the Austin scene. Seemingly random and somewhat all-over-the-place at times, the Daze pulls it together for cool interviews with folks like Texas' future governor Kinky, KGSR's Jody Denberg, and noodley music guru Bela Fleck. Our readers call it the "Best Comic/Zine" in town.

The motto of the TT is "What are you laughing at?" And they hope it's something they wrote. Sometimes it is. A staff of budding journalism students, activists, and nut jobs offers plenty to mull: roommate orgasms, the "Poorly Kerned Issue," and even fake ads for "Fourier Transforms: Functions in Discrete." (Don't ask us, we haven't been in school for a very long time.) This is not your everyday campus newspaper. 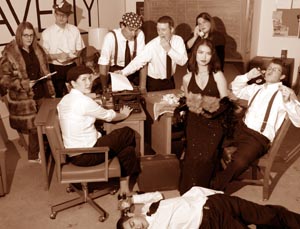 It's no surprise, really, that readers say KVUE is tops in local TV news – sportsman Michael Barnes, meteorologist Mark Murray, and reporter Quita Culpepper have each earned their own BOA acclaim. Put 'em all together – along with other station faves, like 2005 Texas Press Association Best Anchor Christine Haas – and whaddaya get? Austin's top-ranked KVUE news team.

One niche? One degree? Austin360 covers 360 and then some. Traffic, weather, help wanteds, restaurant reviews, breaking headlines, hot concerts, not-so-hot concerts; there's even a place to sell all your valuables. So much information, so little time. Good thing it's online. Quick, smart, and convenient: a fine tool for anyone wanting to get to know Austin.

Aw, shucks! You like us ... you really like us! And that's a tall honor. We will burn the midnight HTML to keep you armed with the very latest and greatest on what's what in A-Town, on everything from government scandals to the very yummiest burgers in town. We love you, too, and will strive to improve and retool to better serve you in the virtual world as well as IRL. Thanks, Austin!

This internationally renowned PBS concert series has been wowing audiences since 1976, making it the longest-running. The stars love to add their shine to the stage amidst the twinkle of the Austin skyline backdrop. Willy's been there (including his pilot performance so many years ago), Lyle's sold it out, and budding supernovas consider it the "big-time." Produced in Austin by our beloved KLRU-TV, the show is taped live, creating an unparalleled televised intimacy between audience and performer.

Good matches aren't uncommon in morning radio, but perfect pairings are. JB and Sandy, two down-to-earth, sometimes self-deprecating, everyday guys are faves with area listeners, especially the ladies (just listen to their call-ins). Add to that their regular appearance in this poll courtesy of our readers. Folks appreciate how very Austin-oriented they are; their dedication to those in need speaks volumes. In fact their first radiothon raised over $450,000 for the Kelly Davidson Foundation. Add to that their annual Bikes for Kids event, and the motivation for all their votes becomes clear - they love Austin, but Austin loves them more.

River City, a deceptively liberal enclave within the most powerful conservative state government in the country. With tragic and farcical state politics, and the city trying to balance growth with a near mythical idealization of itself, incisive print journalism and opinion is at a premium. That's why the Chronicle is doubly elated and humbled by your pick of Senior News Editor Michael King as Austin's "Best News Journalist." Anyone here would be quick to testify to the tireless hours King spends writing and editing the stories we tell, peeling back the layers of state and local politics with insight, wit, and peerless aplomb. After all, someone in Austin has to do it. 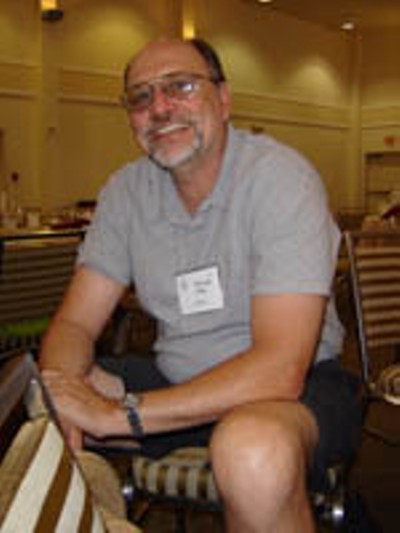 It would be easy enough to let Alan Pogue's credentials speak for themselves - New York Times Magazine, Boston Globe, Washington Post, L.A. Times, Texas Monthly, and various Japanese publications, to name a few. But credentials don't tell the story of stark images, captured on film, and preserved with Pogue's discerning eye, one that hasn't blinked since he left Vietnam in 1968. As politically and socially active as he is talented, Pogue does not shy from personal involvement with the causes he believes in, giving his photos distinct and memorable character.

With opportunities for rubberneck people-watching so indulgent you might get whiplash, this popular local coffee co-op is perched on one of Austin's most used forks in the road. Watch as crowds of Austin's finest choose the road less traveled ... or the other one. And do it all with full (FULL) bars of wireless, sipping a latte, posting something online. Also check out their new location on Barton Springs Road.

Documentary filmmaker, nationally syndicated radio talk show host, and that guy you can find railing against the police state on Access TV, Alex Jones is heralded as a patriot by some and dismissed as a loose nut by others. Here in Austin we're glad to claim Jones as our own and hope he continues to protect our civil liberties and our great country in doing so.

When they say "listener-powered," they mean it. Fueled by the community's desires, needs, and ideas, KUT's programming fills the spectrum, and the whole shebang is 70% funded by support from listeners like you. National shows like World Cafe and Weekend Edition add fuel to local faves like Left of the Dial and the Big Ear'd Radio Show, giving KUT an amalgamation of sounds, news, and genres – a perfect match for Austin's diverse population. And seeing as we live in the live music capital of the world, it’s only befitting that our public radio station be one of the best sources for live in-studio sessions. KUT’s Eklektikos and LiveSet both ensure you can hear great live music without having to wear close-toed shoes or, really, anything at all.

When they say "listener-powered," they mean it. Fueled by the community's desires, needs, and ideas, KUT's programming fills the spectrum, and the whole shebang is 70% funded by support from listeners like you. National shows like World Cafe and Weekend Edition add fuel to local faves like Left of the Dial and the Big Ear'd Radio Show, giving KUT an amalgamation of sounds, news, and genres – a perfect match for Austin's diverse population. And seeing as we live in the live music capital of the world, it’s only befitting that our public radio station be one of the best sources for live in-studio sessions. KUT’s Eklektikos and LiveSet both ensure you can hear great live music without having to wear close-toed shoes or, really, anything at all.

And once again, KVUE's Mike Barnes breaks into the lead! Oh sure, Roger Wallace from KXAN and Dave Cody from FOX came close to edging him out, but in the end, the Texas native and repeat BOA winner takes this year's honor as favorite sportcaster on the tube. He's been with the ABC affiliate for a good long time too, starring with them in 1989. That's a committment to our town and sports that's hard to beat.

Austin loves its Longhorns, and Austin loves the way Kirk Bohls reports on the venerable UT football team. The "E.F. Hutton of Austin sports" comes to his love of all things burnt orange legitimately; he reported on the Horns over a quarter of a century ago. Yet even when he weighs in on non-Horn sports, his opinions are savvy and smart.

For more than 30 years Fred Cantu has been doing what he does best, reporting the news. His roots are in radio, but today you can see his friendly face as evening news anchor for KEYE-42. Through his years of service to the community, one thing has remained the same: his dedication to his fans. Winning this title for the third year in a row, he appears to have the dedication of his fans, as well. No wonder he's known around town as "Uncle Fred."

Quita Culpepper's poise and professionalism shine through on the three days a week she reports and the Weekend Daybreak program she hosts. Her stories on Austin volunteerism and evacuee services during the 2005 hurricane season transcended the usual human-interest reporting to show us the very human side of Katrina's aftermath. We are proud to say Culpepper takes this Austin Chronicle prize home once again, while very worthy contenders, KVUE's Emmy-award-winning Clara Tuma and KXAN's porch-sitter Jim Swift, round out our readers' top picks.

We were shocked when KXAN's Jim Spencer grew a goatee this summer because we're used to his delivering the weather exactly the same, every day – in fact we depend on him to do it the same way all the time. But the goatee proved that still waters run deep, and we realized that this mild-mannered man has an edgier side. He's not just a weather forecaster; he's a weather artist. This is Spencer's umpteenth well-deserved "Best of Austin" award – an honor he regularly trades with this year's close second, Mark Murray of KVUE.