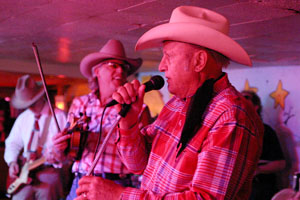 Best Reason to Shine Your Boots

The Broken Spoke is many things to many people – dance hall, hangout, bar, restaurant, museum, employer, home away from home – but the institution of Hardcore Country Night last year was the most wildly successful event of recent years. So successful, in fact, that the early evening show is now twice monthly on Tuesdays, with regulars like Pinetop Perkins sitting in. Headed up by the fiddler supreme Alvin Crow and Spoke owner James White, the band features former Nashville stalwarts Pete Mitchell and Neal Flanz playing the coolest, most traditional country music around.