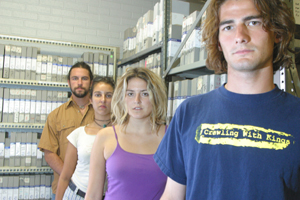 C'mon, people, just when it's getting good? OK, we promised we wouldn't rant about the impending doom for our beloved local music video station. Instead, let's accentuate the positive: the show and the people! Angela Miller's World Groove spins reels of global goodness, the Jolly Garogers' Pirate Speaks!! speaks for aaaaarrrrrrrr! itself, and AMN Classics hosted by Tim Hamblin kicks open the Texas crypts. Plus, there's Timecode: NOLA, Women Who Rock, The Euro Hour, Bounce, and Bounce RX. Tune in before it's too late. Or perhaps there's still hope? We hope this time next year to be able to give them an award for Best No-More-Mixed Signals for Our Beloved Music Network. Here's to AMN! Long may she cast!