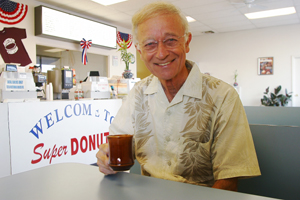 After Mr. Smith's bow from the airwaves earlier this year, we felt compelled to examine and honor the life of Fox's former morning forecaster. Graduating from the University of Houston in 1960, Gordon enlisted in the Army, where he worked behind the scenes on several USO tours featuring the likes of Bob Hope. Coming back to Texas in 1965, he served as KXAN's meteorologist for an astounding 20 years before taking a break. In 1991, he returned to television at KTBC, Austin's oldest station, once owned by Lady Bird Johnson and at that time a CBS affiliate. Up until his recent retirement, Gordon most recently helmed the "News in the Morning" weather for KTBC (which turned into FOX 7 in 1995) with friendliness, warmth, and a modest elegance that will sorely be missed.