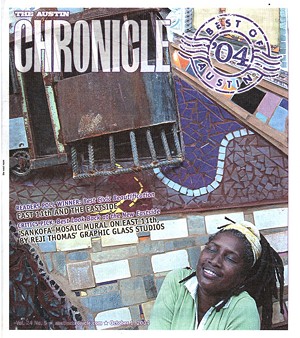 The Hope That the Present Has Brought Us

EASTSIDE, MIDSUMMER, 2004: The lovely park setting at once honors and belies the area's history. At dusk, the last orange light of day paints the new old-school brick with a twinkly sheen. At dark, street lamps take the place of natural light and lend an air of urgency, of somethin' goin' on. Dr. Charles E. Urdy. Never met the man. Would honor him here, but this park I am sitting in does a fine job. The clock tower is nice. Not really my thing. The mural is cool in a kind of graphic-arty, urban-renewal way. No disrespect intended, again: just not my thing. I like it. I like that it's there, but every time I see it, a little voice inside whispers, "Zatarain's!!!" (Very distracting.) One night, after a late to-do at the new old watering hole up the block (that always, no matter under what label, both then and now, has with open arms welcomed everyone), I took a walk to that little park named for Dr. Urdy. I spied, through the impressive slab that is John Yancey's cheerful Rhapsody mural, a park bench. A moment alone. A sit down to enjoy the night air.

What filled my eyes and heart is on the cover of this issue ... Sankofa. The woman responsible for Sankofa, which has garnered the award you see below, Reji Thomas and I go way back. I first sought her out after seeing work she had done matching the old acid-etched panes for the Capitol dome's early-90s renovation. She is a creator of profound art. The choice to put her work on the cover is personal: part literal honor - I think her art is terribly underrated - and part metaphor. Sankofa represents the now. The now that is made from the then and the when (to be). Juncture. Reflection. On closure. On progress. On time.

The Eastside. An inadvertent theme? You could sit and read me wax on about it in this intro, or you can read on, open your doors, get out, and behold Austin, our town. Enjoy. - Kate X Messer