It's deliciously ironic that the first real stand-up move by Democrats since Clinton came from Bush's home state. Definitely more delicious than a week of Grand Slam Breakfasts at the Ardmore Denny's. The saga of Tom DeLay’s midcensus redistricting racket and the quorum-busting Killer D’s could go down as the moment when it all went wrong for the GOP.

It's deliciously ironic that the first real stand-up move by Democrats since Clinton came from Bush's home state. Definitely more delicious than a week of Grand Slam Breakfasts at the Ardmore Denny's. The saga of Tom DeLay’s midcensus redistricting racket and the quorum-busting Killer D’s could go down as the moment when it all went wrong for the GOP.

Like every increasingly beleaguered public servant, TP&W has had to do more with less over the last few years. They have responded by heroically holding the line on open space, finding ways to supplement public dollars with private aid, and remaining dedicated to the caprock principle that the future of Texas must be much more than poured concrete and high-speed networks. When you're tempted to dismiss "bureaucrats" as unnecessary, think a green thought in a green shade, and thank the folks at TP&W.

Three years in a row! Everyone really does love a Wynn-er. We suspect that Wynn's recipe for being the Favorite Local Flava includes healthy scoops of Regular Guy and Typical Austinite, despite the loftiness of his mayoral perch. He'll need all the popular support he can get.

Now in his seventh – and apparently eternal – legislative session, over the years Rep. Naishtat has quietly and steadily become one of the most effective legislators in the state and a leader among those who focus their energies on support for health and human services. He was among those at the center of the fight not to balance the budget on the backs of those citizens least able to bear the burden. And when he was among the leadership of those who broke the House quorum and adjourned to Oklahoma rather than submit to the tyranny of the GOP majority, driven by national partisanship. Beyond the uproar of the political moment, Chronicle readers recognize District 49's Rep. Naishtat as a man of the people, for the people … and definitely among the "Best of Austin."

What's not to like? You get to feel virtuous about saving the planet from drowning in your pile of Shiner bottles and cat-food cans, and you get to pick up additional or replacement bins from your friendly and good-looking neighborhood fire fighters. Win, win.

You think? We've heard several times now that light rail is dead. Are those reports greatly exaggerated? Or is it still the best effort to improve Austin, even if it is dead? The next year will tell, as the A-train chugs toward its probable last chance for voter approval in 2004.

You want "weird"? There is a Web site called Keepaustinweird.com "perpetrated," so they say, "by the creators of beloved original bumperstickers." Then there are all those T-shirts, koozies, etc. featuring the loopy-lettered logo that everyone associates with the catch phrase. The folks behind those? Absolutelyaustin.com, a clearing-house of local business promotional goodies, as well as UT merchandise, has also been attempting to copyright the catch phrase. This of course does not sit well with some folks, especially those at Keep Austin Weird, who are now launching a campaign to "Keep 'Keep Austin Weird' Weird." Weird, huh? Needless to say, we are retiring this category.

His/her eminence, Austin's queen of political soul, the downtown fixture and two-time mayoral candidate does the work of hundreds in the crusade to Keep It Weird. He has groupies. He has wannabes. If Leslie weren't here, we'd have to invent him.

Leslie can be found on Congress Avenue during the daylight hours, and on Sixth Street most nights.

When District 51 Rep. Glen Maxey retired from the Legislature after 10 years, the reason was practical: "I've got to earn a living." His departure says more about our state's parsimonious government – only the rich can afford to endure – than it does about the man. Maxey hit the organizing bricks so quickly he was presidential candidate Howard Dean's state chairman before Dean knew who he was. Using the Web, a tidal wave of volunteers, and his own inexhaustible energy, in a couple of months Maxey has made the Dean campaign an immediate and growing presence in Texas, spooking both enervated Democrats and smug Republicans. He promises he won't just take back Texas and the White House, he'll take back Scholz's too! We wouldn't put it past him … and the next round's on us!

Ever wonder what it feels like to work at Round Rock-based Dell? Their Web site describes the experience thusly: “Excitement. Being in the right place at the right time. Walk the hallways and you can feel it.” Meanwhile, at the other end of the tax bracket, Whole Foods has long provided steady paychecks and a cool working environment for the city’s artistic types. Hey, it takes all kinds.

The only reason we wish SafePlace didn't win is that we wish there weren't a need for the organization. But, since there is, hats off to the sanctuary offered to victims of domestic abuse and sexual assault, regardless of gender, sexual orientation, race, ability, age, national origin, or religion. And extra kudos for all the community outreach from school-based services to the annual SafePlace Walk to community education.

His colleagues would not likely describe him as unsung or unwilling to sing: This defender of Austin ideals has been in the thick of the fight against the plan to redistrict him right out of office.

His colleagues would not likely describe him as unsung or unwilling to sing: This defender of Austin ideals has been in the thick of the fight against the plan to redistrict him right out of office.

Recumbent in her splendor, Amy Babich puts her money where her mouth is. Or, more aptly, she puts her buttocks where her sentiments are – not merely writing glorious idealist letters detailing the need now! to turn our city into a bicycle utopia, but actually practicing what she beseeches. Catch her any day of the week cruising the mean streets with her streamers and her look of determination flapping in the wind. Rumor has it next year she'll be part of Lance's team, the first person to take on the Tour de France reclining.

Fandom god or Hollywood anti-Christ? Hmmmmmmm ... Either way, it's not surprising that Harry would take this readers award yet again: It's just too hard to stay away from his Web site and sneak a peek at the latest movie spoilers and Tinseltown buzz. Consider it the little man's revenge against the Bruckheimers of the world. Plus, how could you not love a man who dreamed up one of the coolest horror camps ever: Camp Hacknslash?

She's beautiful, witty, and genuine. She's charming even when she's angry (remember how cute she was banging that phone on the counter in Divine Secrets of the Ya-Ya Sisterhood?) or stressed out (which made her famous in Speed) and especially when she's playing the ugly duckling (Love Potion No. 9, Miss Congeniality). But the best thing about Sandra Bullock is that she's an under-the-radar kind of girl, having chosen to live in our fair Hollywood away from Hollywood. While it may be hard to imagine not noticing Sandra about town, the fact is she's even been carded at the Hole in the Wall. Said the door guy later, shrugging, "I didn't know who she was." Shirking the paparazzi to bum around Austin and pay cover like the rest of us civilians? Now that's sexy.

We’re pretty sure most folks sporting those “Keep Austin Weird” bumper stickers aren’t showing their support for the GOP. Nevertheless, ballot boxes confirm that being Republican in Hyde Park is almost as “weird” as being Green in Tom DeLay’s district. 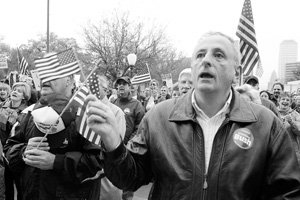