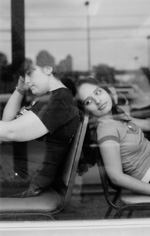 Best Dejected Ladies of the Morning

Amy & Jackie of The Lonely Girls' Co-op on KVRX

There was this show. On KVRX. On Tuesday mornings. So early. Sometimes we were asleep. It's not there anymore. We miss it. It was The Lonely Girls' Co-op. It starred Amy & Jackie. It was neat. They were, like, real girls. Like at a slumber party. Or a hangover breakfast after a night of binge Jell-o shots and forgotten panties. Or your best dorm pal crashing in your bunk because her stupid roommate and her stinky boyfriend were getting it on and making noise ... you know, like rabbits ... or worse, hyenas, because rabbits don't make too much noise, really. At least we think they don't. So, we are sticking with hyenas.