Most of us shy away from talking about race. Not Michael Ray Charles. This Austin artist discusses it all the time, through his work. For years his striking, provocative images drawn from dated stereotypes of blacks – Sambos, Mammies, Uncle Toms – have been asking us tough questions we might otherwise avoid: How have blacks in America been defined by whites? What do those definitions say about our society? Are those definitions changing? Yet even as these images challenge us, they offer a visual richness of texture, style, and hue – all of which has earned Charles international acclaim. "The Property of ...," his 2003 show at D Berman Gallery, may have seen a shift in approach (from 2-D art to installations), but the subject remained the same: race in American culture. And for that we are fortunate.

If there are Austinites who still think orchestral music is a snooze, well, they just haven’t met Peter Bay yet. In the five years he’s held the director’s baton at the Austin Symphony, Bay has brought an invigorating energy to classical music locally. His enthusiasm for great scores (especially 20th-century works) and meticulous attention to their performance, along with a spirited conducting style – he all but dances on the podium – makes highbrow sounds by Mozart, Mahler, and those other golden oldies seem as fresh and immediate as anything on the FM dial.

This trio of talented young artists has quickly built up a large following since returning to Austin from art school. Jana Swec, Shea Little, and Joseph Phillips work in concert, creating brilliant color collaborations on the same canvasses. Local art lovers have taken notice and are beating a path to Bolm Studios, Sodalitas' swanky East Austin digs, to get in on the ground floor. And the "little pops" are more than willing to spread the love: Currently, they are organizing tours of East Austin artist studios.

Turning trash into art is not a new thing. Using that trash art to decorate public spaces and reinventing the elevator as an art gallery is. Elevator Art Club, a collective of local guerilla artists, uses the detritus of modern society – pics "acquired" from photo lab Dumpsters, flash cards "collected" from local grocery stores, and sundry other objects – to create beautiful spaces inside the confines of elevators. You may encounter an entire wall of shrinky dinks or an artful array of one repeated portrait with commentary painted over everything. It's a bit of a crapshoot. The club’s main targets are large corporations and parking garages. Obviously, the general viewing audience is limited to whomever happens to come into the elevator before the cleaning crew does. 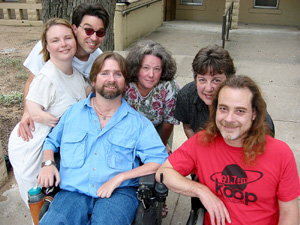 The title says it all: This is theatre of the real, the stuff of which life is actually made – love, sex, hate, fear, food, and brain injury. Actual Lives features the work of adults with disabilities performing their own stories from their own experiences. Led by deaf performance artist (and Esther’s Follies co-founder) Terry Galloway and occupational therapist/Ph.D. candidate Chris Strickling, what began as one weeklong workshop has grown into two theatrical productions per year and has become a model for similar programs around the country. The students enjoy a week of writing and workshopping their material, which culminates in a live performance for the public. The results are amazing, always deeply moving, interesting, insightful, and yes, quite often hilarious. Hearing (or reading the interpreter’s lips or the closed captions that run simultaneous to the show) these truly candid tales may just rock your world.

We just can’t help grinning when we’re around Ron Berry. There’s something about this actor/director/camp counselor that radiates jubilation, as if some shiny, happy party is going on inside him all the time. It animates his work onstage, making his comic turns (say, his clownish Odysseus in Water or his goofy ballet for Björk in Celebrity Crush) inspired in their exuberance and giving his dramatic characters – as in his Critics Table Award-winning performance in Proof – an uncommon aliveness, a light from within. Out of the spotlight, that joy fuels whatever mad artistic adventure he’s on, be it a multiple-playwright theatrical epic like Orange or transforming an old warehouse into the Blue Theater. Funny name, that, for this guy’s creative home; if there’s one thing Berry is not, it’s blue. And that tickles us pink.

Whenever theatre starts looking like the Same Old Same Old, we can count on the dirigo group to stage something that makes it fresh and novel again. It may be a new look at a play we know (or think we do) – such as Ibsen’s gloomy Hedda Gabler, which they gave a full-body makeover, dolling it up in 1950s cocktail attire and dabbing its neck with the provocative scent of the Love That Dares Not Speak Its Name – or it may be a new look at people we know (or think we do), like the amiable, decent characters in Bash, whose stories reveal that even nice folks are capable of unspeakable crimes. Whatever they do, the dirigites’ inventiveness, commitment, and bravery guarantees that the world will look a little different after you leave their show.