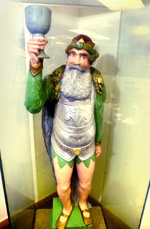 Best Legs of a Patron Saint

Alec, Patron Saint of the Engineers

Old Alexander Fredericke Claire: If you've never strolled through UT's Engineering Library, you've probably never had the pleasure of making his acquaintance. "Alec," as he is affectionately known, has enjoyed quite the rollicking history. Originally "acquired" from Jacoby's beer garden by a bunch of mischievous engineering sophomores the night before April 1, 1908, the statue – of a regal-looking fellow hoisting his goblet in a hearty toast – was from that day forth dubbed "Patron Saint of the Engineers." Thus began Alec's long and messy history of custody battles, vagrancy charges, and governor pardons, all while being stolen back and forth between wacky factions of law students and engineering students. Today, what's left of the original Alec – his torso – sits in a hermetically sealed display across from a reconstructed Alec, bolted under a glass case in the Engineering Library. The new Alec highlights not only his eternally high spirits and good nature, but some curiously creamy-white thighs, which only add to his spritely, impish appeal.