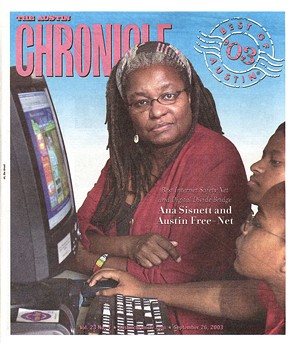 How could I call myself a "Best of Austin" editor and not take every opportunity to revel in Austin at its best?

The night scene at Barton Springs is the type of serene that can soothe a furrowed brow and turn what was a bad day into a playful, soul-saving reprieve. So when my sweetheart called ­ her voice a respite unto itself ­ saying that her class of goofball playwrights was whooping it up at Club DeVille and would I like to meet them for the evening's last hour at Barton Springs, I knew my toes would be twinkling in that constant 64 degrees in no time.

"Or are you too swamped with "BoA'?" she asked with just enough tenuous concern in her voice to cover for her obviously carefree and altered state. "BOA," in our lexicon, is that bastard chunk of the calendar that wraps from mid-May until late September, from the time we first run the ballots, to when this freakin' issue the "Best of Austin" finally hits your hands. Sure, I was swamped, but my decision was easy. What's better in Austin than Barton Springs with a crew of wild and wooly UT writer-types? Parking was easier than usual. I made my way in and headed for the long, winding concrete stairs that make any entrance into the springs seem grand. Before I could step down, however, a petite, white-haired woman grabbed my forearm - the way a loving aunt, grandmother, or European might - and led me over to a buffet table on the landing. "Darling, we've been celebrating! Come, have some cake!" I was mesmerized. Did I know her? What was the celebration? She disappeared as suddenly as she had snagged me, so I did the same with a cookie and sneaked down the stairs.

As I hit the bottom, near the rim of the swimming hole, I heard baying. Hounds, perhaps? Timber wolves? Their howls ripped through the night. It turned out to be a chorus of mostly women. Full moon at Barton Springs! Yes! The little ladies celebrating up on deck were aaaaaaawwwrrrrooooooooo-ing along with all the others out to honor the moon and worship at the altar of Austin's nature scene. Then it became clear. This is the stuff of ritual. Choruses singing praise to the full lunar glory were resounding from all ends of the mighty pool.

I found my love, splashing and baying up a storm. So I lied down on the cool, wet concrete and met her at the edge for a kiss. Though I stayed out of the pool, my head was swimming. "How Austin is this?" I thought to myself, mindful of the stupid grin spreading across my face.

See, my job's easy. Whether databasing your favorites (Readers Poll) or coordinating ours (Critics Picks), even in the thick of the most tedious stages of compiling this massive issue - an issue we hope you'll love, argue with, use, and refer to throughout the year - my job is to get out and love this town. Austin. God/goddess bless Austin. And bless Barton Springs, too. The rumors of her death, after all, are greatly exaggerated.

This year, we chose Ana Sisnett and Austin Free-Net to grace our "Best of Austin" cover. For me this seems obvious. Austin Free-Net (see this related feature) represents some of the best this town has to offer. But for those who are newly acquainted with Austin Free-Net, I invite you to take in Mike Clark-Madison's piece. Enjoy! thanks, y'all!

So many people infest the woodwork of this issue: First, there's Assistant Editor Verushka Gray, who has since hightailed it to NYC (and that damned rotten apple'd better be good to her Š). Then, I cannot resist a secret shout-out to Abe Lincoln Vigoda for being so sweet, even when this issue turns me into a monkey. Next are Lindsey Simon and Karen Rheudasil, our personal Web/software gurus, without whom "BOA" would still be languishing in 1996. Then, there's our stunning proofreading department, who bear the worst of the "Best," check facts, and right my wrongs ­ and the front-desk staffers, who receive all the paper ballots and field some very silly questions. Big thanks also go to Art Director Taylor Holland, who likes to keep it real; Marketing Director Erin Collier, who likes to keep me on my toes; and most importantly, the fearless crew of intrepid interns, most especially Kristy Summers, Wells Dunbar, Dave McCaul, Benton Heimsath, and returning intern/writer Jen Quereau. The rest of our fine staff of interns ably assisted in databasing and fact-checking; they make this issue (and me!) sing: La! La! La! LA! ­- Kate X MesserM