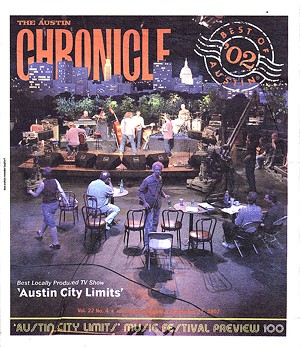 That's what I said to myself after I first saw the ultimate "Best of" issue, put out this year by Seattle's The Stranger. Why should anyone ever bother putting out another "Best of" in their city ever again? The tongue-in-cheek Seattle newsweekly released its annual "Best of" issue July 25, 2002 (www.thestranger.com/2002-07-25/index.html). What was in store for this year? Well, careted between the words "Best of" and "Seattle" were the words "Our Advertisers in." Right. "The Best of Our Advertisers in Seattle." Cripes. They did it. The very thing that "Best of"s the world over are accused of – editorial driven by advertisers – was put on display as the ultimate spoof and the ultimate suck-up to advertisers all at once. Irony upon irony, demystified for your snarking pleasure. It took guts – sort of.

Advertisers are a curious lot. Some of them understand the relationship at hand – they pay for space and get it. Some feel entitled to more, and get really, really hurt (or sometimes very angry) if they don't feel the love from the editorial department. Unfortunately that doesn't change the relationship. Advertising is advertising, and editorial is editorial.

What it all amounts to is this: Our annual "Best of Austin" issue is our way of letting our readers vote on their favorite Austin things. We weigh in with our opinions, too, because we just can't keep quiet about the many cool things we notice throughout the year.

Because we love Austin, dagnabbit. It's as simple as that. – Kate X Messer

There are a ton of fine folk to thank for the manifestation of this issue: First are Wayne Alan Brenner, Brian Barry, and Taylor Holland for some conceptual goodness. Next up is our noble proofreading department, who always bear some of the worst of the "Best." We couldn't even have a BOA without Karen Rheudasil and Lindsey Simon, our personal software gurus. Then there's the front desk staff, who keep all your paper ballots sorted during the voting. In the back end, there are marketing directors (outgoing) Tommi Ferguson and (incoming) Erin Collier, whose tasks merely begin when this issue hits the streets. And most important is our fearless crew of intrepid interns, most especially Verushka Gray, Kristina Witt, Dianne Riddle, and Julio Carreon-Reyes. The rest of our fine interns ably assisted them in databasing and fact-checking. Without them, this entire endeavor is nothing.