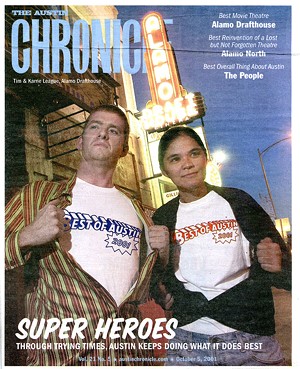 David Bowie's song has been strafing my subconscious since that fateful day last month: 9-11. Since those images are burned forever into my brain -- not so much the ones of horror, of heinous atrocity, but the ones of the big burly everyday Joes with beer bellies and fire helmets, emerging shell-shocked from the destruction gantlet, covered in concrete and what used to be life, stumbling toward oxygen masks and safety -- I, and the rest of the editors, have worried that our "Super Heroes"-themed "Best of Austin" might seem flip.

The concept of "Heroes," after all, is currently under review.

Our original idea for our 2001 "Best of Austin" was a carefree take on Superheroism, something we felt might cheer up our town of slumped economy and smart-growing pains. Plus, we had Mr. Comic Book, Robert Faires, on staff to lend his gallant pen to the proceedings. We would focus on our "City of Heroes," our "Hometown Heroes" -- survivors of the boom and impending bust -- the folks who make Austin Austin, we reasoned, and make a statement about what is true and fine about our town.

What better a dynamic duo to represent the very best of Austin survivors than Tim & Karrie League, whose playful Alamo business concept of a cinema drafthouse and whose expansion into the old Village theatre sums up all that's good about this town? Taking an old, beloved arthouse and resurrecting it beyond its former glory? If you've lived and breathed film your entire life as so many cine-geek Austinites have, chances are you'll feel more at home at the Alamo than you will in your own living room. How much more Austin can you get than that?

Our "Best of Austin" cover is an attempt to reflect the results of our Readers Poll and Critics Picks. So many people had voted for the Alamo under a number of categories (it won "Best Theatre" in Arts & Entertainment), and most of our writers wanted to give it some sort of award and write about it.

As a symbol, the Alamo is home.

Through trying times, Austin continues to do what it does best, and that is be itself. We are Austin, united or not; our diversity and our passion for life and living are evident in the best things this city has to offer: the Alamo Drafthouse, our Blood & Tissue Center, the Doug Sahm shrine at Antone's, our beloved Barton Springs and Zilker Park, our firefighters, and even that crazy star in front of the Bob Bullock Texas State History Museum.

In a period of time when the tone of the national discourse is more "damn the dissent, full steam ahead" than measured reason, it is essential that we exist as Austin, onward through the fog and haze, despite the rockets red glare. We hope you accept our Super Heroes theme. And we hope you understand our reason for wanting to stick with our original cover idea. If you don't, we're sure you'll tell us, and that's what makes our town great.

Back to "Heroes": David Bowie wrote that song as an elegy, no ... that's not right ... a celebration of life and love during wartime. Its pointed lyrics about lovers standing at the Berlin Wall resonate with a message that "life goes on." Here, in Austin, and here for the purpose our annual "Best of Austin" issue, "life goes on" is not intended as some sort of reductive "get over it" mantra to trivialize this time of great pain and great heroism, but instead as the ultimate affirmation: Life goes on.

Credits: The Super Powers Behind "Best of Austin"

You wanna talk heroes? Then look at this list of fine folks behind this issue: First, there's Lindsey Simon, who built an entire new system for collecting and compiling data; without him, we would be nothing -- or drearily manual, at the very least. Robert Faires provided pen strokes broad and fine, creating some rather superheroic section art. Then there's our amazing staff of proofreaders (guided by the firm hand of Managing Editor Cindy Widner), production crew (including Art Director Taylor Holland), front desk folk, and interns. Some interns we'd like to single out for their efforts above and beyond the call: Anne Harris, Elizabeth Skadden, Angela Glass, Eyad Karkoutly, Jennifer Quereau, and Cathy Vaughan.