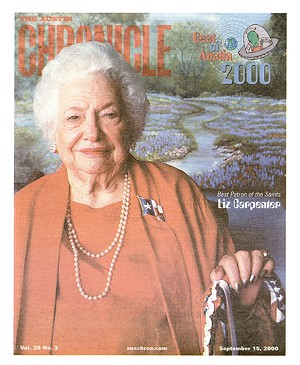 Sometimes, I just get lost in the Austin of it all, you know? No matter how congested the traffic gets or how ridiculously over-priced the real estate market, after almost a decade of watching this town's unprecedented and unnerving growth explosion, I still catch myself in dreams, head-over-heels love with this town. Austin's just *got it*, you know? And no, I couldn't tell you what "it" is.

But I bet the aliens could.

Our city basks in the glow of the violet crown -- and whether you are of the school that says that comes from a strange phenomenon of light emanating from the ring of hills lining our metropolis, or the one that says it has to do with the glow from our glorious moontowers, or even the one that insists it has something to do with the head chakra, you've gotta admit: It's heavenly.

Aliens. We've been asked about the aliens. The ones who graced our original poll ballot. The ones strewn throughout this issue. Yeah, we know. That whole Roswell, Area 51, X-Files-y thing ... so Nineties. Yeah, well ... this isn't about that. It's about influence. It's about mystery. It's about culture -- where it came from, where it's going, how it changes.

How the world began? Don't ask us (ask the masons). But how Austin changes? Now that's right up our alley. Ask us about our favorite things in this ever-changing Austin, and we'll run on for pages.

The Best of Austin is that. It's our love for this town. The aliens didn't tell us what to pick. They didn't tell you how to vote. But they are watching -- inserting their being in the soft earthy mounds of humanity every chance they get (just look at that sign on Red River, see??).

Austin, we love you. You are out of this world. - Kate X Messer