We couldn't all be firemen when we grew up - only a lucky few could tackle the task. It takes the right stuff to be willing to risk all for others. To the men and women of AFD, for your vigilance, courage, and too-often unsung heroics, the readers of The Austin Chronicle salute you.

Providing meals and services to those who can't leave their homes, Meals on Wheels has proved invaluable to more than 2,500 beneficiaries in the Austin area. Free wheels, meanwhile, are what the Yellow Bike project is all about; they've been providing bikes to bipeds rent-free since 1997.

Perennial readers' favorite Slusher may have endured some growing pains since his scruffier days as the Chronicle's politics editor, but through it all - Smart Growth, watershed protection, and the city's seemingly endless expansion - he's managed to stay on top by remaining true to his environmental roots. Slusher's dedication to keeping Austin livable has made him your favorite for three years running.

Where else could a homeless transvestite crash a parade for a local football hero and draw big cheers? That's what happened in January when Leslie Cochran, normally best-known for his scant outfits and tiara, donned a UT cheerleader uniform and jumped into the parade for Heisman Trophy winner Ricky Williams. Leslie may be under fire from downtown bigwigs who feel he's a nuisance, but our readers say he's a lovable eccentric. Like the bumper sticker says, "Leave Leslie Alone!"

Best Effort To Improve Environment
Save Our Springs Alliance

These people really care, and apparently so do you. Together we can preserve and yes, improve, the legacy that nature has bestowed upon us. The Save Our Springs Alliance lives in the trenches regarding our beloved Barton Springs and maintains priceless vigil over the Edwards Aquifer. 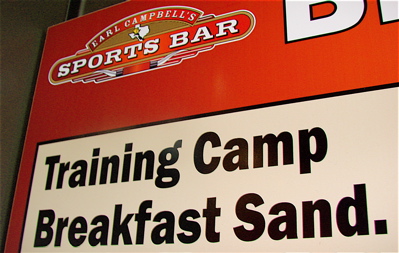 Yet another sign we've stopped being a small(ish) town: the exodus of the airport from a central city neighborhood to a spot in the hinterlands. This was the big story for the last year, and the media went all out covering it. While the Statesman's ABIA day-by-day coverage bordered on overkill, the live TV coverage made for a fun weekend of channel-flipping. And why not? This fluffy, feel-good story actually had some teeth. From the quirky public art to the sleek and sexy concourse, the long road in Austin's history that finally lead to Bergstrom shows that public process can amount to something pleasant and even fun.

Helping children is what these two not-for-profits are all about. Theadvocacy center brings together professionals, volunteers, and local government entities to advocate for children's health and welfare; the children's shelter provides emergency care to children who have been neglected or abused. Together, the two agencies provide much-needed services for Austin's most vulnerable residents.

Can AISD ever dig itself out of this hole? Not only are accountability ratings down, but TAAS tests - used to determine a school's statewide ranking - were deliberately manipulated by one of the school district's own employees, pushing several Austin schools into better categories. When the deed was discovered, AISD had mud on its face, but so far, no high-ranking official has been held accountable.

High Noon: Texas State Capitol, Austin, Texas. Political pressure from the right; a Houston Democrat on the left. Rodney Ellis stood his ground, refusing to remove the reference to homosexuality from his hate crimes bill. Conservative lawmakers in the Senate shot that brave bill down.

Thank God for Glen Maxey. This dogged crusader rallied tirelessly for full funding for the children's health insurance program - a generous appropriation which Governor George W. Bush opposed - and passed legislation that increased funding for summer children's nutrition programs, among a long list of other accomplishments. He's been your favorite for four years and counting.

Since 1997, Austin's popular mayor has negotiated a minefield of tricky issues with grace and self-effacing charm. From channeling growth and directing annexation to confronting Austin-bashing state legislation, Watson has shown that he can hold up under pressure and respond to challenges with innovation, energy, and expertise.