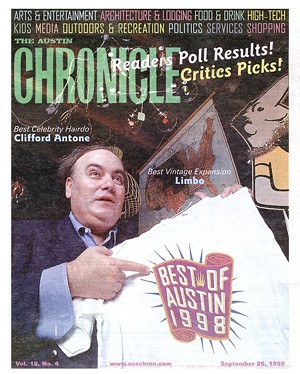 This is the largest issue The Austin Chronicle has ever produced. No wonder.

This year reader response to our "Best of Austin" poll (ballots were run last summer) exceeded all previous years. While we don't release numbers, we can tell you that when we read that "over 500" readers contributed to the results of a West Coast big city alternative newsweekly's annual poll, we laughed out loud. We threw away at least that many, due to stuffing, this year alone. And we can tell you that stuffers do not comprise the majority of our voters.

No, the majority of our ballot respondents - you, our readers - told us with your votes about few of your favorite things in Austin. Chronicle writers (or "Critics," as we affectionately refer to ourselves) also showed up in droves. Comprising the largest batch of BoA contributors ever, 57 writers offered both their own choices in the "Critics Picks" section as well as annotated the "Readers Poll" blurbs.

When our writers began turning in ideas for Best of Austin awards, we noticed - as we have for the last few years - that there were some developing trends. Every year, one or two things stick out and give us pause for contemplation. This year, we noticed that a remarkable number of people wanted to write about lizards, reptiles, and tropical fish. Interesting also was the number of women who turned in items related to guns and other weapons. However, the predominant theme made its way to our cover. It's our choice for the best thing about Austin, 1998: Austin's Thrift and Vintage Culture. We chose Limbo ("Best Vintage Expansion") and covermodel Clifford Antone ("Best Celebrity Hairdo") to express this lovely theme (see left).

Now, I could wax on at length about all this, but I think Jay Hardwig's feature "Other People's Stuff" sums it all up. And then Ken Lieck's thoughtful little sidebar, "Juxtapose This ..." turns it all on its head.

Turn the page and see our readers' choices for the Best of Austin. Following each Readers Poll category is a section of Critics Picks. So we leave you with this, dear readers: Heartfelt gratitude for responding to our poll, for reading this issue, and for simply loving this fabulous city as much as we do. Enjoy. - Kate X Messer