"Daryl Slusher is right." There couldn't be sweeter words to new city councilmember Daryl Slusher's ears -- but especially so if they come from his old nemesis, the Austin American-Statesman. The daily, long a pincushion for Slusher's journalistic jabs, seems now to have quite a fondness for Slusher in his new position, and is saying so right and left. They appreciate his "open government" initiatives in editorials, and can't resist running his picture next to positive stories about his tough tactics on the dais. Hmm... what's next for the dragon-slayer?

Best Answer To The Statesman's "did You Inhale?" Question
No Comment

Just before the city council races in May, the daily ran a front page story called "Did they inhale, and does it matter?" Reporter Diana Dworin asked each of the sitting councilmembers and council candidates whether they have ever smoked marijuana, under the pretext of election coverage. The only councilmember who didn't submit, or lie, was Max Nofziger, with a terse, "No comment." As for the follow-up question in the story: "Does it matter?" Apparently not, as the confessed pot smokers on the ballot won handily.

When the First Lady of Austin was asked to wield her PR powers to help pass $369 million in Austin Independent School District bonds, Christian gladly lent her expertise. She allayed the fears of the environmental and minority community, and tax-weary voters responded with a vehement "yes."

Intelligent. Informative. Necessary. That's In Fact, the weekly handbill of local political coverage circulated by veteran reporter Ken Martin. He's scooped the daily with frequency and style, and his campaign finance coverage for the recent council election was nothing short of fabulous, slicing and dicing campaign finance reports like a Ginsu master.

If Austin is ever to be "the most livable city in the nation," as the city management motto goes, the soon-to-be old airport is probably one of the best places to start. With over 700 acres to work with, the suggestions that have come in to the Redevelopment Task Force have verged on the bizarre -- hey, howzabout a zoo! -- but the most likely scenario is a multi-use land plan mixing low- and middle-income residential, commercial, and open space. Now the only thing we have to worry about is where to put those darn llamas.

We admire those who remain enthused about their work as it grows ever more thankless. The merry wonks at OCRA have, in the last year, negotiated a fractious franchise renewal with Austin CableVision; midwifed the city-wide broadband network project from a pie-eyed grandstand play to a fairly sensible franchise with CSW; dived headfirst into Doing Something about access television; and embarked on another, equally messy franchise renewal with Southwestern Bell. All this as the Feds, via the Telecommunications Act of 1996, dumped a load of new responsibilities on the localities, i.e., us. You'd have gone crazy; they appear unscathed.

The mayor can't stand him, so he must be doing something right. He's Richard Troxell, who, as president of House the Homeless and a former Vietnam veteran, speaks for Austin's homeless population. Week after week at council chambers, he has waged a one-man war against Todd's anti-homeless ordinance passed last January. The camping ban is still on the books, but it'll be tirelessly challenged as long as Troxell's around.

To steal an analogy from Daryl Slusher's old newsletter, The Daryl Herald, councilmembers are like two-year olds -- if you don't keep an eye on them, they'll wander off where they should not, hide things from you, and be generally uncooperative. They also need to be babysat, and Slusher's new aide, Robin Cravey, appears to be good with kids. He came to city hall last summer for former councilmember Max Nofziger, and was largely responsible for Nofziger's late-bloom series of rapid-fire initiatives that focused on clear air and clean water. Now, he's started afresh with a brand new councilmember who could run anyone ragged with his darned questions and council-watching ways. Cravey is up to the task.

For a woman who loved the limelight, it didn't make much sense for America's most famous atheist to pull a Houdini. But disappear she did, along with her son Jon and adopted daughter, Robin. The trio left their belongings, and their beloved dogs (although two of the three dogs also later disappeared). At the end of September, it will be a full year since they vanished. And now, atheists across the country must simply await their second coming.

Too bad the most exciting renewal project on East 11th Street is being done for the benefit of dead people. But not entirely; this is more than just a fix-up gig. The State Cemetery is being redesigned and rebuilt into a landmark of Lone Star dignity, a fitting resting place for Bob Bullock, whose cause this is, and an incipient tour-bus magnet right in the heart of Blackshear.

Ordinary citizens can change the world, particularly if they're the visionary kind. By gathering together 22 volunteers from Austin's mainstream to form the Citizens Planning Committee, chair Ben Heimsath, also a local architect, helped change Austin's vision of itself. The CPC engineered a model for neighborhood and developer involvement in the city's growth process, the end result of which has already led to greater understanding between fighting factions and smoother city operations. It's a pretty simple idea: Everyone gets to play. A revamped land development code and regional cooperation is next on their list.

Let's not mince words: The proposed Austin Museum of Art is long overdue. The project, which will give downtown many things -- a badly needed cultural focus; a new facility designed to serve diverse cultures; its first world-class architectural work in years, to name a few -- was unfairly derailed by The Bust. When AMOA forces got it back on track this year, the council supported their efforts -- and reaffirmed the idea of the city investing in culture -- by voting 6-0 to revive the project. It showed that they know art matters. 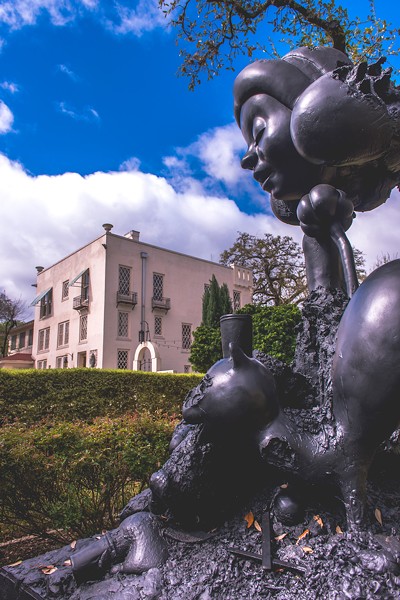 When councilmember Eric Mitchell attempted to keep East Austin representation off the non-profit board that would redevelop East Austin, the stage was set for the foxes to guard the hen house. Thank goodness, after a loud outcry from some tough chickens, the council overruled him last winter, and four area reps were added to the ARA, previously comprised largely of developers. Now, after monthly meetings and workshops that provided community input, the group has meshed in a true attempt at positive solutions.

This OOPS! appeared in the January 19 Chronicle [Vol. 15, No. 20], and subsequently became humor fodder on Jay Leno's recurring press bit on The Tonight Show: "Last week's Chronicle erroneously reported that Eric Mitchell had shouted `Up Yours' to residents of the Swede Hill neighborhood at a Housing Subcommittee meeting last year. In fact, Mitchell leveled a `Screw You!' to the residents. The Chronicle regrets the error."

Issacharoff's defense of UT's affirmative action admissions program, after losing the Hopwood case at the 5th Circuit Appellate court last spring, was the most passionate, well-versed argument for the program made in the flurry following the ruling. Unfortunately, Issacharoff's speech was closed to all but those affiliated with the UT law school, and his comments never got wide play.

Last August, Ronney Reynolds unplugged Bruce Todd's privatization dreams for the Electric Utility Department while plugging his own 1997 mayoral bid. In a press conference, Reynolds told lobbyists to stop banking on the deal -- a direct shot at Todd's father-in-law, his former co-worker, and his campaign consultant, all three of whom work for a major EUD suitor, Texas Utilities. The rest of the council followed Reynolds' lead, and it may have been the most successful political maneuver of the year -- putting the brakes on yet another boy-who-cried-emergency situation, while appearing thoughtfully mayoral.