On her way out of office, Richards marked a Bible passage for the newly inaugurated Gov. George W. Bush: "Hate evil and love good, and establish justice in the gate; it may be that the Lord, the God of hosts, will be gracious to the remnant of Joseph."

Ingram, a former Dripping Springs student, was expelled last winter when under question-able conditions, officials found a marijuana roach in his truck. While Ingram intends to begin college in the fall, he feels cheated of his education for something, he argues convincingly, he didn't do.

Have you taken a walk down Congress Avenue lately? Austin's downtown is actually becoming pedestrian-friendly, with coffee shops and restaurants now able to serve customers out on the avenue under shady trees and awnings. Bravo to the council, which passed this ordinance unanimously last year, for its most successful (and cheapest) attempt at downtown revitalization.

Things looked grim for the APD after last February's Cedar Avenue incident, when a routine police call turned into what many termed a "police riot." But the APD seems to have taken seriously community concerns about the lack of minority officers and is changing its recruiting policy. Starting this summer, cadets wait until after they finish training to take the civil service exam, in the hopes of giving African-American and Hispanic recruits a better chance of making the force.

Feted as one of the saviors of American democracy, Cortés has also been called one of the most powerful people in Texas. He is the founder of the Industrial Areas Foundation (IAF), whose local chapter is Austin Interfaith. Under Cortés' fiery leadership, this multi-denominational organization has achieved a community-based political power, focusing on education, social programs, and health care for the poor.

Peña attends nearly every city council meeting, often to speak about homelessness issues and the need for a juvenile detoxification center in East Austin. He traveled to Washington, D.C. last year to try to find funding for such a center and is credited with originating the city-wide curfew ordinance. Peña spends four nights a week working with Citizens on Patrol, and is also president of East Austin Concerned Hispanics.

We salute Diane Hernandez and the staff at the "Happy Kitchen" Food School, who provide free cooking classes in English and Spanish to interested Eastside residents. For six weeks at a time, participants learn to prepare delicious, nutritious, and inexpensive meals, and take guided grocery shopping trips to learn how to get the most food for their money. Each class ends with a free bag of groceries so the newly learned recipes can be prepared at home. Kerbey Lane Cafe hosts a graduation dinner at the end of each series. Muy bien trabajo.

It's a tie between her novel and her bill. A Perfect Match was the title of Combs' first steamy, soft-porn novel, but it wasn't her first stab at fiction. Claiming her "takings" bill wouldn't harm Austin, other cities, or the state, Combs was victorious in both the House and Senate in winning landowners the right to sue if government regulations lowered the value of their land by at least 25%. The governor signed on in late June. It didn't come out until after the Senate vote, but a report by the Texas Natural Resources Conservation Commission (TNRCC) found that the bill will cost us "millions." Maybe Combs should have done the taxpayers a favor and given up her day job.

After watching the United Methodist Church discriminate against gays and lesbians for years without protest, the 60-year old pastor at Austin's Grace United Methodist Church set out on a two-week hunger strike last spring. Moore started his fast to coincide with an international bishops conference in Austin, hoping to convince church leaders to take a stand against such bigotry. Moore's fast resulted in the conference issuing a statement expressing "concern" for the mistreatment of gays and lesbians.

This coalition of local grassroots activists issued daily communiques toward the end of the legislative session, keeping virtually up-to-the-minute tabs on anti-Austin legislation. Unlike the city's paid lobbyists, these folks earned their slogan, "Going to BAT for Austin." 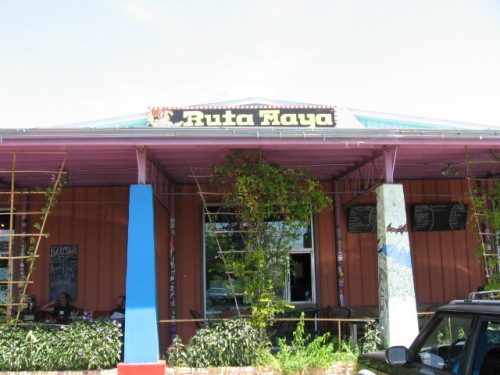 After five years of searching, coffeehouse owner Tim Sheehan finally found a way to get Cuban coffee into Austin cups and Havana culture into local hands. Under the supervision of Cubita, Cuba's national coffee company, an Ecuadorian company grows Cuban coffee plants. The beans are then exported to Texas, with each bag containing a sort of cultural trading card with information about a Cuban artist, musician, or writer.

It's a beauty: Lots of color and environmental information to let you know just where the heck you are, environmentally speaking.

Lately, ex-city councilmember Bob Larson has been looking out for Austin taxpayers with his new group Save Austin From Extravagance (SAFE). Larson wants Austin voters, not the council, to decide whether to spend $10 million in public funds on the new baseball stadium. This spring, the council avoided a lengthy public relations campaign and passed the expenditure on an "emergency basis" as certificates of obligation, which don't require a public vote. Larson may be chasing lost dreams of virtue: The stadium is a done deal by all accounts, but we're impressed with his battle over the principle of the thing.

The mild-mannered Pogue simply tried to take a photo of the former legislator. But she'd have nothing of it, grabbed Pogue's camera and threatened to scream. And you thought only bigshots needed bodyguards.

A coalition of 25 organizations and governmental agencies, the AMTC has been working for more than two years to coordinate a trail system in the Austin area. The group won nearly $7 million in federal and local funds for trail construction and maintenance in 1994, and is pushing for a $20-25 million bond package to add another 35-50 miles of trails. This summer, the AMTC released a 206-page Vision Document, which identifies 70 potential hiking trail corridors and greenbelts in the Austin area.

Congressional conservatives are threatening to do away entirely with funding for this private, national program that offers legal aid to poor people. The Central Texas office alone helped 10,000 people last year, turning another 3,000 away due to lack of resources.

Located at the far left of the city council dais.

The brainchild of Rep. Ted Kamel and Sen. Gonzalo Barrientos, the new agency will allow citizens to pre-purchase tuition at state universities, thereby allowing parents to save money for college and lock in lower tuition rates.

Best Transit Decision In Quite Some Time
Austin Transportation Study

In a magnanimous Christmas gift to the citizens of Austin, the ATS decided last December to cancel plans for several new roads and street expansions over the Edwards Aquifer/Barton Springs Contributing Zone. The decision is not only ecologically sound, but is expected to save taxpayers at least $47 million in construction and land-acquisition costs.

Don't mess with these folks. They play hardball politics, then go to church.

It's been a rough year for Austin's utility: It can't seem to get rid of the city's share of the South Texas Project nuclear plant; it has endured constant haranguing for the Holly Power Plant; the Legislature is threatening to open the market to independent power producers; and Mayor Bruce Todd keeps trying to sell them off. Despite all this, the EUD has continued to search for a solution to Holly, offers a fantastic rebate program to businesses that build using energy-efficient materials, and continually mails out educational materials to teach Austinites the secrets of responsible energy use.

Released last January, this committee report outlines 12 steps to turning Austin into a sustainable, compact, livable city with a strong tax base. Maybe next year we can give an award to whomever begins to implement it.

Perhaps you haven't had as many nice encounters with them as we have. But you must admit, even when they're working hard, they're lookin' good!