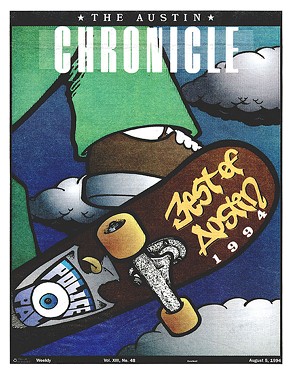 These are the winners of the 1994 Best of Austin polls, as originally printed in the Austin Chronicle, August 5, 1994. The Awards are split into two distinct categories, the Readers' Poll and the Chronicle Critics' Picks.

The Readers' Poll: Ballots for the Readers' Poll were printed in three separate issues of the Chronicle, and readers sent them in. Results were tabulated by Jenna Heller, with help from compilers Brian Baker, Tony Mosely, and Chip Rosenthal. This year the reader's choices are in their own section and annotated. We don't take any credit or blame for the choices -- the voters make those -- but we did add brief explanatory comments on each entry, written by Spike, with help from Louis Black, Rob Patterson, and Margaret Moser.

Critics' Picks: These are the people, places, and things that we at the Chronicle have singled out for special recognition in this issue. The Chronicle staff, at a number of meetings spread out over four months before the issue, suggests and discusses categories, winners, and writers for our picks. Each section hada supervising editor who compiled the various entries: Architecture, Rob Patterson; Arts & Entertainment, Rob Patterson; Food, Margaret Moser; Kids, Julie Weaver; Media, Hugh Forrest; Outdoors & Recreation, Nick Barbaro; Politics, Louisa C. Brinsmade; Services, Julie Weaver; Shopping, Jackie Potts.

As always, a note of caution: Austin is brimming over with new businesses and old businesses that offer excellent service, staff and merchandise. The Best Of issue is simply a way of acknowledging some of the very best of them; we don't mean to disparage anyone else. This year's results are not meant to supercede the last four years of polls, but to supplement them. As always, categories and winners were radically changed. If you won an award last year and didn't this time around, it doesn't mean we don't love you any more; we're just giving someone else their turn. - Louis Black