Good golfers call this the worst course in town, but for beginners, it's a slice of heaven (or is that a slicer's heaven?). The oldest golf course in Texas (1899) is right down the block from the Chronicle and it's lured lots of Chronicle and SXSW staffers to take up the ancient game. In fact, the Chronicle golf team won the third place trophy in this year's SXSW golf tournament, played at (you guessed it) Hancock.

Frankly, we don't know a thing about Jackie or her pompoms, and Mr. Smartypants refused to go undercover on this one to find out. Still, so many readers recommended her that we figured they must know whereof they screech. Rah.

This one's a little unfair, since it's not open to the public, except by invitation. But this bi-annual installation at the home of the head of local computer game company Origin Games (with the collaboration of Nintendo) is so spectacular - boasting such audience-participation treats as an indoor boat ride, rope swing, and numerous hidden doors and secret passages - that if you can somehow wangle an invite, it's something you shouldn't miss. The best of the rest? You'll have to wait for the Chronicle's haunted house guide coming out the week before Halloween.

Tree-shrouded Mount Bonnell, with its 785-foot high view of Lake Austin and downtown Austin, has a curfew 9pm-4am. Due to problems in patrolling the area late at night and the increase in crime, officers run off picnickers promptly at 10pm. The other 17 hours a day, it's still a great place to show off the beauty of the Hill Country to athletic out-of-towners.

Always politically correct, often overlooked ... Austin's "other'' spring-fed swimming hole was once a limestone eddy-cum-resort near the banks of Town Lake. Now the beautifully maintained park, Eilers, is great for families and a convenient cool-down for Hike & Bike trail joggers.

Strap the bikes on the car. Drive over the South MoPac construction, some 8 miles from downtown to the Circle C Ranch. Unpack the bikes and glide over your tax dollars at work. Listen for bulldozers as you wind through the Hill Country above the Recharge Zone. Slow riders and kids watch for racers.

Best Place To Celebrate A Birthday I
Showplace Lanes

Happy, Happy Birthday to you. Are you 7? Nineteen? Forty-two? Bowl a spare or a strike, They are open all night, In-between eat a corn dog or two. So you've knocked down only one pin, There's really no need for chagrin. How can you lose in those fashionable shoes? It's your birthday, they must let you win. So on that very special day, Go bowling! - whaddaya say? A birthday surprise That's good for the thighs And blows mini-golf away.

The place to celebrate birthdays. Phooey on bowling alleys.

The reasons for this Mount Bonnell hideaway's inclusion here are well-known to regulars and should be experienced by everyone else at least once. Just remember: BRING YOUR BOTTLES BACK DOWN!

An Austin Yuletide tradition - stand under the Zilker Park Christmas tree, with its those wonderful red light, look up and spin, spin, spin. Get dizzy, fall down, and do it again. And again. And again. Past experience recommends that you not attempt this on a full stomach, and that you wait until after spinning before imbibing any holiday cheer. 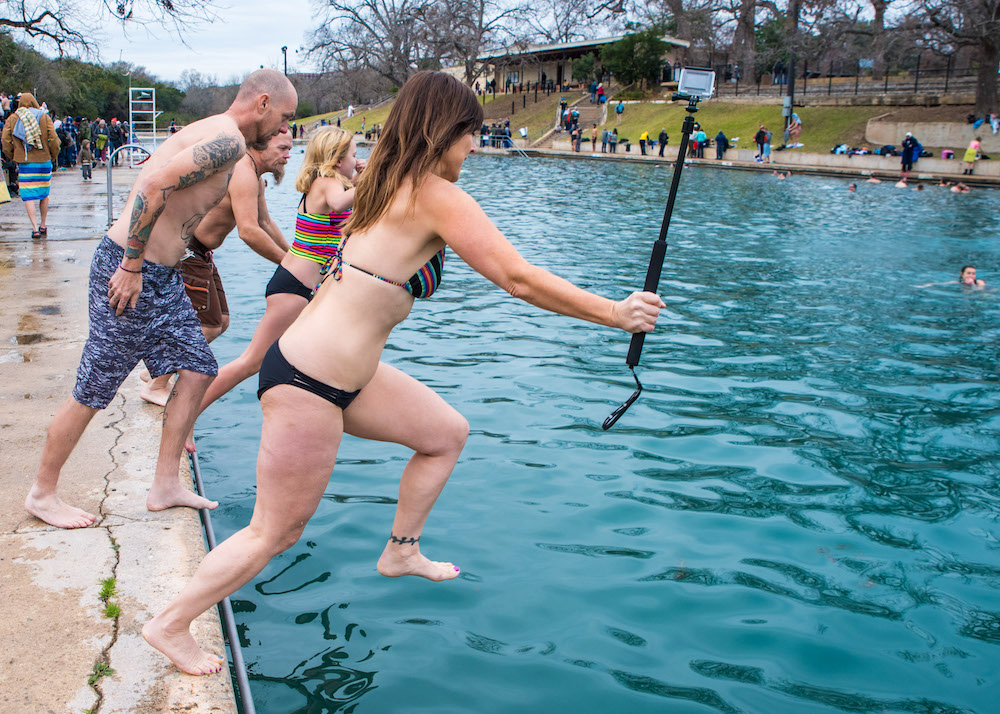 No surprise here. No chlorine, no racing stripes on the bottom - this place is it. And though it's the place to swim, the city seems to have trouble with the place. The pool is part of Barton Creek. The spring itself is part of the creek; without the two dams, it would still be part of the creek. Yet the city wants to regulate it like it's a regular swimming pool. In one of their safety reports they called the pool an "In-line drainage facility." Despite the bureaucrats and safety experts, it's still one of the earth's greatest places. More than a swimming hole, it's a way of life.

Sure, you have to overcome modesty and be inured to peeping pervs to take full advantage of the clothing-optional freedom offered at this longtime Lake Travis swimming site. But it's one way to avoid any tan lines at all, and far cheaper than a salon. The feeling of liberation from going naked in the great outdoors is an added attraction.

Best Place To Trespass
The Quarry

We've been told that this old swimming hole is now toxic to the max, but hey, there's no signs up that say so, plus the place is beautiful, in town, has just the right size cliffs for diving without dying, is completely unlit which makes for great skinnydipping, and we've never heard about the owners showing up and throwing anybody out. So if you can't hack taking the risk of gaining an extra limb or growing old overnight, then go find your own pool, two-eyes.

Rich, poor, black, white, young, old - everybody in town goes to Barton's. With virtually no clothes to hide their behinds, people just relax and play. If there's a better place to watch people, where is it?

Okay, so this isn't the most politic-ally correct choice. None of us have condos at the Westgate Tower, so we go where the view is free. By sheer coincidence we were there during the recent eclipse in all its lunar splendor, so when the call for suggestions came up, this one was easy. The lot has been outfitted for moongazers, complete with trash receptacles and a bench. Still, watch out for the red ants if you're sitting on the grass.

Austin loves its festivals, and we have a number of fine ones - Aqua Fest, Eeyore's Birthday Party, Old Pecan St., Fiesta at Laguna Gloria, the SXSW Music Fest - all have their seemingly permanent places on the city's social calendar. But the one that really captures the spirit of the city isn't an organized festival at all, but an impromptu city-wide celebration of ... well, of celebration itself.

Best Reason To Bring Back The $2 Bill
Manor Downs

Friendly, informal, a fun outing for the whole family - it kind of makes you wonder why horse tracks used to have such sleazy reputations that they ran a whole monetary denomination off the market. And it's still usually uncrowded enough that you can get a spot right on the rail.

As you take a (careful) left off of 2222 just past Loop 360, you climb into the hills to drive along a ridge that offers magnificent views of the city to one side, and occasional glimpses off into the Hill Country to the other. Then you descend through woods to the lovely green banks of Lake Austin. An enchanting Sunday afternoon drive.

Barely a bump in the landscape not far from McKinney Falls State Park, Pilot Knob is the best of about ten very small volcanoes in the Austin area. That's because it's the most visible and accessible, according to Dr. Dan Barker at UT's Geological Science Department, while remnants of the others lie under railroad tracks, Huston-Tillotson College, St. Edward's University, and Rosewood Park. You can visit Pilot Knob because the city owns part of it. Perched on the top of the 70-75 million year old volcano is a water reservoir and a few benches.