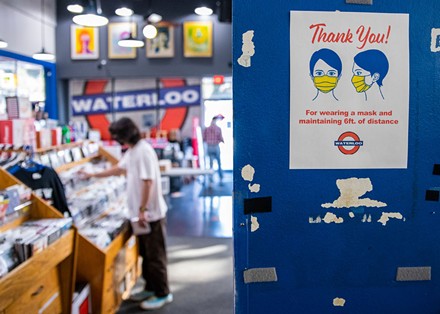 March 11, 2020, Austin Music Awards night at the Moody Theater: Waterloo Records takes home Best Record Store as it has every single year since the category debuted on the Austin Music Poll in 1982. To many that Wednesday evening, the show proved their final live musical attendance for the year. Five days after Mayor Steve Adler and South by Southwest dropped the news heard around the world ("canceled"), the event also provided a novel excuse for at least one attendee to stop at the actual store on the way home from another history-books ATX prom night.

Like other fundamentalists around the capital – Antone's, Breakaway, End of an Ear, Half Price Books, et al. – the 'Loo initiated curbside service faster than a 45 spins. Soon, even that seemed unsafe: "We were doing curbside service until we thought it safer for our staff and customers to just close," wrote in one manager.

Back up and running shortly thereafter, the music emporium spearheaded a local council of record stores, which decided to stay closed even after state government lied over and over again about gathering safely. Only on Sept. 7 did that aforementioned panic drop-in become the beta testing appointment shopper at the Sixth and Lamar landmark.

Since then, I've been back to stock up on further essentials. Call them the bare necessities. – Raoul Hernandez

This content has not been formatted for this window size.
Please increase the size of your browser window, or revisit this page on a mobile device.
TODAY'S EVENTS