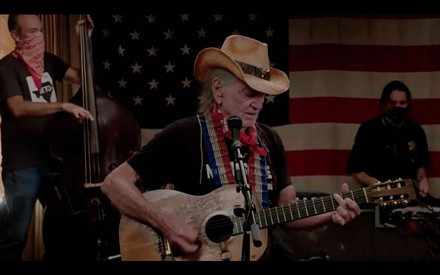 Luck Presents, the production company of Matt Bizar and Willie Nelson's grandniece Ellee Fletcher Durniak, offered a path forward as one of the first organizations to reset to the new livestream reality for live music. The crew quickly adjusted with the March cancellation of their SXSW-adjacent Luck Reunion to present the virtual event 'Til Further Notice and April's Come & Toke It. The pinnacle followed when they ensured Willie's annual Fourth of July Picnic continued in a time of artistic and basic need.

Hosted hilariously haphazardly by Nelson scions Lukas and Micah from the Luck clubhouse at the family's Spicewood movie-set town, the event combined live performances with a Charlie Sexton-led backing band before a two-hour recorded finale of superstars and the Family Band closing out from the Pedernales Studio. Production leaned into the meta-moment, with Robert Earl Keen fronting the band virtually on a TV, creating a screen of a screen ... of a screen, while stage footlights reflected on the television as if it were all happening in real time.

Not without its glitches, the stream provided crucial continuity of tradition, with a homespun and creative twist that added a new element to Nelson's hallowed show for fans. – Doug Freeman

RUNNERS-UP: A Night for Austin, Black Everythang Matters, Blues on the Screen and HOME Cookin' for the Holidays
Tweet
This content has not been formatted for this window size.
Please increase the size of your browser window, or revisit this page on a mobile device.
TODAY'S EVENTS