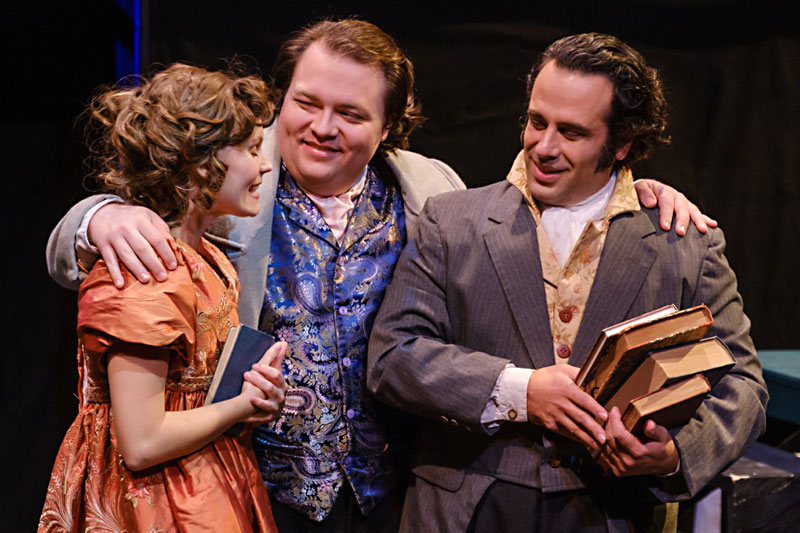 Just for the hell of it, playwright Tom Stoppard wrote 15-Minute Hamlet, an abridged version of Shakespeare's longest work and most complex tragedy. It was actually 13 minutes long, followed by a wild two-minute rendition as encore. The condensation of the storyline and the speed with which it unfolded not only made the classic work accessible; it made it funny. The same can be said for Joseph Hanreddy and J.R. Sullivan's adaptation of Jane Austen's already witty 1811 novel, Sense and Sensibility, as performed by Austin Shakespeare.

The play tells the story of two young sisters – the clearheaded Elinor and the impulsive Marianne (brilliantly portrayed by Corinna Browning and Emilotte Persson). When their father dies, the girls and their mother (a wonderfully stoic Johanna Whitmore) fall into genteel poverty because the family estate is left to John (an engaging Jorge Flores), a petty son by an earlier marriage, and his obnoxious wife, Fanny (Emily Green, whose exaggerated portrait of pomposity nearly steals the show).

How the sisters and mother survive is the focus of this story (211-year-old spoiler alert: They rely on the charity of eccentric distant family and friends, played to perfection by Isaac Howell, Holley Garrison, and Kathy Lagaza, among others). Also of concern is whether the girls will ever land husbands with little to offer besides intelligence, beauty, and the ability to finger a fortepiano (another spoiler alert: Of course they do, courtesy of the discombobulated Edward Ferrars, played to a brilliant extreme by Matt Hislope, and the dashing Colonel Brandon, played by the dashing Nick Lawson). How they react to and recover from an ongoing series of misunderstandings, secrets, heartache, and illness (yet another spoiler alert: very well, thank you) is also in play.

The playwrights' adaptation of Austen's 50-chapter novel manages to maintain the novelist's trademark features: lengthy and insightful observations about human nature and social class, rich and detailed characterizations, and dazzling wit relayed through plenty of meticulously constructed wordsmithing. But to shorten the play and move along the storyline, characters often declare their preparation for dinner or travel to the countryside in one sentence and then immediately remark about how wonderful dinner was and what a glorious countryside this is. So absurd are these abrupt disturbances in the space-time continuum that, like Stoppard's 15-Minute Hamlet, you can't help but shake your head in bewilderment and give in to the much-appreciated if inadvertent fun.

And because the play is still too long, Austin Shakespeare director Ann Ciccolella puts the pedal to the metal in order to hold the attention of modern audiences. Fortunately, her actors are adept at speed-reading Sense and Sensibility while still delivering mouthfuls of clever dialogue with absolute clarity and impeccable English accents. They also exit and enter the performance space – an expansive, multilevel set with only fleeting reference to the early 19th century, designed by Evonne Paik Griffin – with such urgency that they seem to be fighting the impulse to speed-walk. This, too, adds a sense of playfulness to the proceedings.

Costumes and hair by Maddy Lamb and Olivia McCain do the heavy lifting in keeping this production grounded in the period of Austen's novel, though few costume changes occur due to the speed with which this play advances.

The result of all this is an immensely accessible and highly entertaining production of a classic work.