A Season for Scaring at Phantom Fest Ever feel that the only bad part of Halloween is that it just doesn't last long enough? And we don't just mean how stores are ready to pull all the best pumpkins off the shelves in September to make way for Christmas tinsel. It should be longer than just one night, and this year, Phantom Fest presents nine events over 11 days and nights of spooky delights, highlighting every aspect of Halloween from the ghoulish to the delightful. "It's a time of imagination and wonder," said founder and event programmer Adam Sweeney, who described the event as a way to celebrate the whole dark Halloween rainbow, "whether that's the visual or theatrical spectacle."

In conjuring up Phantom Fest, Sweeney and the team at production company Torpedo ATX are scheming to give Austin the kind of scary season common in towns like Salem, Mass.: And if that makes Austin a new Halloween Town, then Sweeney might become its new mayor. He said, "It's the one night where you don't have to fit into cultural norms, and you're encouraged to be strange. … It's the only holiday that you can view through your own lens and it's accepted." However, he added, "It isn't a celebration you can do by yourself." That's why he regards Halloween as so perfect for Austin and thinks that it's so strange that no one has done something like Phantom Fest before. "Whenever you give Austin a chance to put a costume on – not just for Halloween, but for Pride or any event – the ability to transform is something Austinites enjoy."

The seeds of Phantom Fest were planted in 2020 as Shock the Vote, an election year initiative to use horror films and Halloween events to encourage voting in the November election. Last year, without a ballot to scare up interest, the team at Torpedo ATX turned their bloody gaze upon simply doing good in the community, and the events became a fundraiser for Austin Pets Alive! "This year, we're really locking in on celebrating Austin businesses and creators," Sweeney said, and that's reflected in their choice of nonprofit partner this year: Good Work Austin, dedicated to improving working conditions in the hospitality industry and encouraging restaurants to provide free meals to those in need. And if there's one holiday that's about giving away food, it's the candy bounty of Halloween.

The fact that Halloween can be gory or silly, scary or spoopy, means that Phantom Fest has been able to spread its wings over every kind of Halloween celebration imaginable. This being Austin, Sweeney said, "Live performance is everything. It's not just a live music town, it's a live performance town." That's why their tribute to "It's the Great Pumpkin, Charlie Brown" ("Our most family-friendly event," Sweeney commented) isn't just a screening but a full tribute to Charles M. Schulz, with costumed characters and a reading.

Sweeney said he wanted Phantom Fest to become an Austin tradition: Part of that is working out what Austin's Halloween traditions are. "And that's going to be just as much a part of the community deciding that as the festival organizers." Moreover, he hopes Phantom Fest will encourage Austinites to keep Halloween in their hearts, put some bones in their yard, check out a scary movie, or visit a haunted house. For Sweeney, it all comes back to a line from 1996's witchy fave, The Craft: "'We are the freaks.' That speaks to what people love about Halloween."

Sun., Oct. 23, The Great Pumpkin Bash. Join BookPeople, gluten-free bakery Zucchini Kills, and a pop-up Witchy Market to celebrate the centennial of Charles M. Schulz, the creator of Peanuts, with a day dedicated to "It's the Great Pumpkin, Charlie Brown." 1pm

Thu., Oct. 27, Scary-oke With Karaoke Underground. Indie, punk, and metal? Plus karaoke? What could be better for the season of screams? Just remember, you can't all do "I Was a Teenage Werewolf." 9pm

Fri., Oct. 28, Vampire vs. Slayer Ball. Relive your teen angst and Bronze dreams with a special 30th anniversary tribute to Buffy the Vampire Slayer, complete with a performance by Austin's own queens of the night, the Jigglewatts. 7pm

Sat., Oct. 29, Stranger Things & Halloween Costume Party. Head to the Upside Down in your best Hellfire Club attire with not one but two costume contests, crowning the Queen and King of the Upside Down and the Queen and King of Halloween. Make sure to stuff yourself with Surfer Boy Pizza – maybe even with some pineapple. Try before you deny, bro. 7pm

Sun., Oct. 30, Dog Costume Contest. Just because they're your four-legged friend, that doesn't mean they're kept out of the fun. Canines in costumes are the perfect topper before you prepare your own Halloween celebrations. 1pm 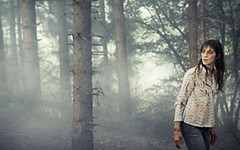