A Walk Through the Wildflower Center's Field of Light 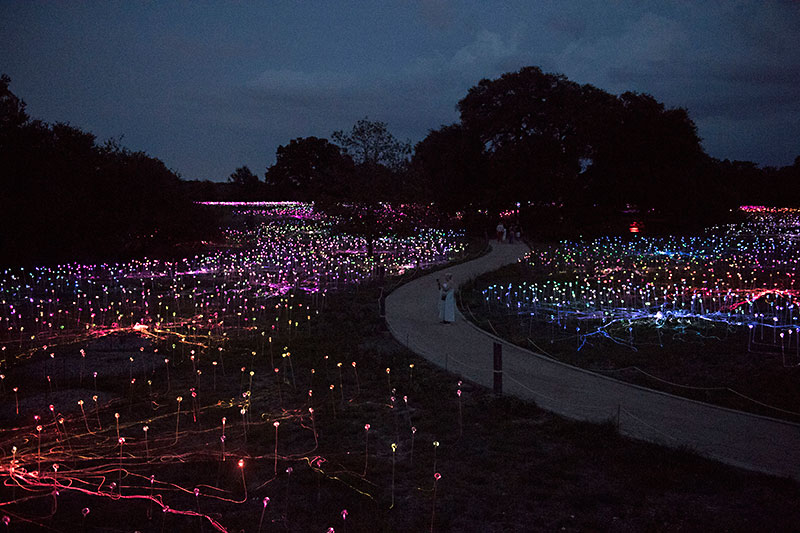 A rare blossom is flowering at the Lady Bird Johnson Wildflower Center. It is not indigenous to Texas, although this is a unique varietal, its cousins having sprouted in around the world. By day, its many tendrils and pods shimmer in the sunlight; by night, they glow from dusk until darkness has swaddled the land.

They are blooms of the Field of Light, a massive installation by British artist Bruce Munro. Covering 16 of the center's 264 acres, the 28,000 solar-powered LED illuminations – glowing, translucent globes on top of acrylic stalks, dancing in the wind – almost look like seed pods, ready to pop. But Munro is not interested in imposing his art on the landscape: Instead, he said, the purpose of the project is "to express how a landscape inspires you. ... People who have never been to this place, they might be drawn to go, 'Oh, it sounds interesting,' but then they discover this beautiful garden." 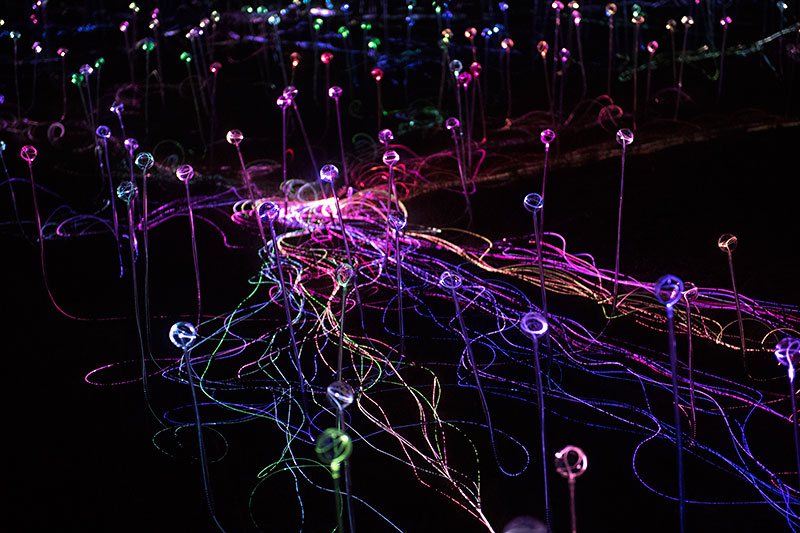 The roots of the project lie in a 1992 road trip across Australia. Munro and his then-girlfriend, now-wife had spent the last eight years living there, and before returning to the UK "we bought an old banger and put a tent in the back, and had four months of travel." One of their destinations was Uluru, the 2,831-foot-tall sandstone escarpment dubbed Ayers Rock by Western colonists, and a sacred space to the Indigenous Pitjantjatjara. Munro admitted that he felt a little cynical about it being overhyped ("I was thinking, 'God, if another Aussie mate tells me how great this rock is, I'll murder them'") but when he actually made it there "I felt completely alive, almost to the point where I thought I'd been stimulated artificially. It was a weird feeling, but really happy and connected."

Immediately, he grabbed his sketchbook and let the inspiration flow. "I worked out that it wasn't about making an object that you stand in front of. I wanted it to be an experience that captured that essence of joy, of feeling at one with the world. And the Field of Light materialized as a concept."

He returned to the UK with the idea, but marriage, kids, and the demands of making a career as a working artist meant that it took a decade before he was able to put together the first incarnation of Field of Light: in a meadow next to the collapsing farmhouse he had bought, using readily available materials. He said, "My dear old mum said, 'Don't be a talker, be a doer,' and that was the best advice I ever had." 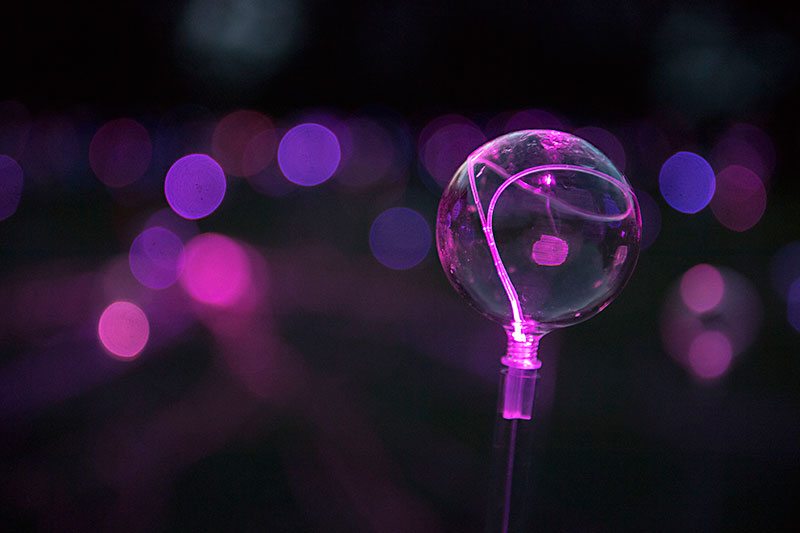 And since then, he's kept on doing. There have been 20 different iterations of the Field of Light around the world, from Denmark to Mexico. In many ways, it has become the defining work of Munro's career, even if he admits he had no such intention when he cobbled together that first version out of what was to hand in his workshop. Obviously, he added, he would have liked it to become the success that it has, "but I just wanted to be rid of this need to create this piece of work."

Each version of Field of Light is created in response to the local environment, but the Austin version came with an additional challenge: Because of the pandemic, Munro had to start the planning remotely, without walking the land. However, the basic process remained the same. "You look at the space that you've got, and you work out the route, and luckily with the Wildflower Center there are really wonderful pathways that exist." There was also a strange recognition: Because of the large number of oaks and meadows, "it was almost like English parkland." Each location reflects the local fauna and topography, and in the case of the Wildflower Center, it's the silhouettes of the trees, and the light gravel pathways, especially how they glow in moonlight. The installation's illumination – "a whisper of light," as the artist described it – is set at such a low level that the ambient light still dominates. "Never try to outshine the moon or the stars," Munro laughed.

Much of Munro's large-scale work deals with a tension between the constructed and natural worlds, often using recovered materials. "We sort of borrow things on their way to the recycling facility," Munro said. Don's Flamingos and Ramandu's Table (named after the sculptor of the original wire-legged pink flamingo, Don Featherstone) in Rockford, Ill., uses infrared light to illuminate flocks of the classic lawn ornament. Ferryman's Crossing, displayed at the Scottsdale Museum of Contemporary Art, re-created the River Styx through flowing waves of compact discs – a medium he has returned to on multiple occasions for its reflective and refractive qualities. "I'm trying to look at the beauty of everyday objects that we don't really look at for their aesthetic values." 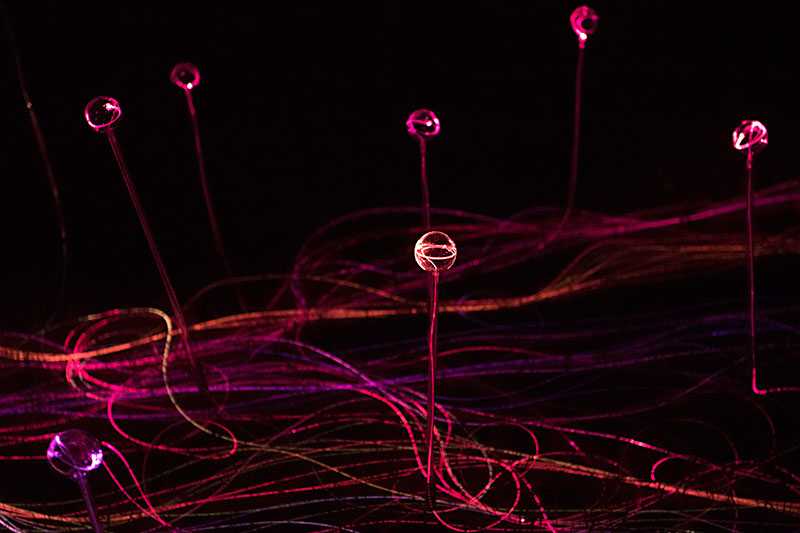 Not just the beauty, but also the practicality: Because, at the end of the day, Munro is as much a technologist and engineer as he is an artist. He recalled being inspired as a child, watching episodes of The Man From U.N.C.L.E. and seeing the spies communicating using video watches. "That was seriously fantasyland, and now you have Apple Watches, and you can do more with those than they could have ever imagined." Take something as mundane as a plastic bottle (thousands of which are repurposed for Water Towers, Munro's installation originally designed for the Cloisters of Salisbury Cathedral). Take one to the court of a medieval king, Munro said, "and they'd think it was magic."

The underlying technology of the Field of Light has changed across time. The earliest versions used harnesses of heat-fused acrylic fibers illuminated by metal-halide slow-strike bulbs ("you put the power on and it takes two or three minutes for the light to warm up") with a rotating color wheel in front. Each projector was 150 watts, "and if you had a hundred projectors that was a lot of power. Nowadays we're using LED technology and each projector is 25 watts. So divide 150 by six, and we're using about 15% of the power we used to use." By the time he took the project to Uluru in 2016, everything was solar-powered, and even the control systems have been miniaturized "so it's very, very green." The environmental element goes beyond reducing carbon footprint or using recycled and recyclable materials. "You don't want to mess up the natural cycle of insects and animals in the area. So we have it on for about four hours a day, generally 7 to 11, and then it goes to sleep."

The cycles and rhythms of every living thing factor into the installation. Even on the earliest installations, Munro noted that he'd seen the demeanor of his team change between entering and leaving the gardens, a change he compared to that in his father when he got over a severe illness when the artist was a child. "We're just beginning to learn that the best thing we can do is spend more time in nature, because it's a natural healer."

At the same time, Munro's work comes with an implicit call to let nature heal, too. As global temperatures spiral upward, he asked, "Are we going to move fast enough to save ourselves from making a complete Horlicks of the planet? We've not grown up in terms of our emotional connection with each other, but we've finally now got so advanced that we can destroy ourselves if we go down the wrong path. That is the real fear, and one of the things I realized a long time ago making art is that, in a very, very small way, you can bring people together, and make people aware not only of themselves, but family, friends, and strangers, and also to the landscape we inhabit and share."

See more from the Field of Light exhibit in John Anderson's photo gallery. 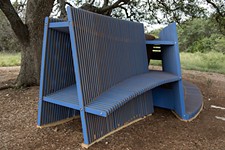