Twenty years in the making, Lowell Bartholomee’s latest collection of short plays is worth the wait 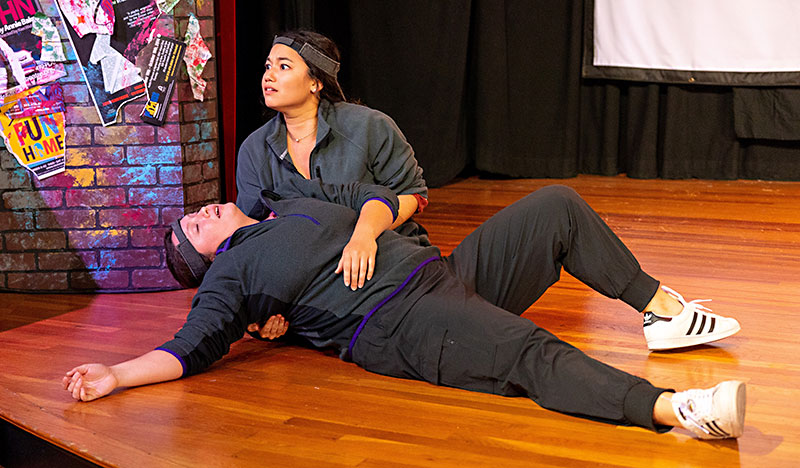 It's been 20 years since playwright (and actor/director/designer) Lowell Bartholomee gathered, and this publication reviewed, a collection of his short works. The Blue Theater playbill described that production – with the self-deprecating title Blah, Blah, Blah – as "seven sharp shorts and more, featuring B sides and previously unreleased material." The Austin Chronicle noted that the writing "blazes like a klieg instrument throwing some gritty metrosphere of modern life into stark relief. Make that stark comic relief."

Expect more of the same in Previews of Departing Attractions, the world premiere production of 10 new and revisited archival works by Bartholomee. Their curation was commissioned by the Austin Playhouse to serve as the opening production for its interim West Campus performance space.

This collection reflects the auteur's trademark wit and engaging intelligence, and each story is (for the most part) thematically linked to the others by its focus on loss – from the pandemic ("This Is Fine"), from old age ("Smiley"), from cancer ("Standing Room Only"), from the pending apocalypse ("Mono no Aware"), and from the shift in Austin's culture as it transitions from weird college town to bustling metropolis (there's a bonus video that memorializes the city's lost playhouses, including the Blue Theater).

The reason for the vicennial gap between anthology productions like these, says Bartholomee on the Austin Playhouse website, is that "my work ethic as far as writing goes has never been everything it could be." Perhaps. But veiled behind each simple story – which offers a mere slice of life or a snapshot moment in time – is the laborious, time-consuming task of creating that illusion of simplicity. Clearly, Bartholomee works hard at making the mundane intriguing ("Game Day"), the inane brimming with cleverness ("One Small Step"), and the depressing flat-out funny ("Bob's Birthday"). He manages to discover just the right word, the most powerful turn of a phrase, the perfectly clandestine punchline, and find their proper placement in a 10- to 15-minute piece of storytelling. It's not easy or expeditious to make each play unfold with impeccable fluidity and end with such astounding and unexpected poignancy.

Bartholomee, the director, employs some tricks of the trade to best showcase his work. He uses set design (Lara Toner Haddock and Mike Toner) modestly – with a piece of furniture to establish a sense of place and video images on three sizable screens around the performance space to provide context – so that, without set changes, one play can seamlessly bleed into the next and provide the desired emotional ebb and flow. There is no intermission. And he brings the performance of several plays out into the audience and allows his actors to work the room. Natalie George and Sadie Langenkamp's lighting design and Buffy Manners' costume design are used effectively but minimally.

The ensemble consists of actors with a history with the playwright, as well as those he met during the recent ScriptWorks Out of Ink 23rd annual 10-minute play showcase at Hyde Park Theatre. Collectively, Juleeane Andrea, Kareem Badr, Zac Carr, Marina DeYoe-Pedraza, David DuBose, Sarah Chong Harmer, and Robert S. Fisher have mastered the delivery of the playwright's smart dialogue and its employment of overlapping talk and cut-off half-sentences. Individually, their skills and the plays they're in reflect a perfect goodness of fit, as if the works were written for them.

An evening filled with Bartholomee's unique brand of short storytelling should not be missed. Too bad they only surface with the same infrequency as cicadas.


Read our interview with Bartholomee about this new production here. The Middle of the Night
Local Arts Reviews